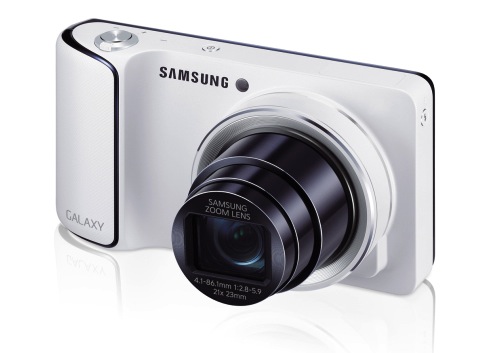 Today most people’s idea of a connected camera is the smartphone in their pocket but Samsung is going to change all that with its new Galaxy Camera.

On one side it looks just like an ordinary camera with a lens, a grip, a flash and all the controls you’d expect to find.

But on the other side there’s a 4.77-inch HD Super Clear touchscreen display that’s usually found on a smartphone.

And there’s even the Android smartphone 4.1 Jelly Bean operating system on board plus a 1.4Ghz quad-core processor.

The device actually has everything you’d expect to find on a smartphone – apps, a large screen, 3G and wi-fi connectivity – except for the phone part.

Despite the Samsung Galaxy Camera having a SIM card you can’t make a call on the cellular network.

But, with the aid of the device’s data connections, it is possible to make Skype and Viber voice calls. And there is a microphone – it can be used to tell the camera what to do with voice commands.

The camera side of the device has a textured grip on the right side which makes it easy to access the zoom controls.

This grip also means the user has solid grasp of the product to keep their other hand free to access the touchscreen, apps, controls and menus.

The only other physical control apart from the on/off button on the top edge of the device is the flash button on the left side which makes the built-in flash pop up out of the white chassis.

It has 16.3-megapixel resolution and a 35mm film equivalent 23-483mm lens with 21x zoom – in other words it’s a massive step from the camera that you’d normally use on your smartphone.

The large 4.77-inch touchscreen on the back make it easy to frame your images as well as access the various controls and shooting modes.

There are no buttons on the back of the Galaxy Camera – it’s completely taken up by screen.

There’s a microUSB connection under a flap on the grip as well as a SIM card slot and microSD card slot located under the flap on the bottom of the camera right next to the rechargeable battery.

With the emphasis of the device as a camera – most of the biggest features are designed to enhance the photographic experience.

Those thinking the Samsung Galaxy Camera wouldn’t be able to match the features and functionality of a standalone digital camera should think again.

It is every bit the digital camera.

When shooting, users will find a number of modes including auto, smart modes and manual.

Other handy modes include best face which takes a burst of five images of a group of people and allows the photographer to choose the best face from any of the five shots to combine into one picture.

There is also an impressive panorama mode that lets you take ultra wide shots.

And of course the Samsung Galaxy Camera can also shoot video in full high definition and even has a handy slow motion mode too.

There are 65 editing options on board which are easy to use thanks to the generous 4.77-inch screen.

But the biggest attraction with the Galaxy Camera is the ability to share your images either directly to someone else’s device either with wi-fi direct or Bluetooth or to cloud solutions like Dropbox.

Samsung also has an auto upload option which saves to the cloud and makes the images available on other Samsung devices.

And this is all thanks to the SIM card and the wi-fi connectivity which means users are connected no matter where they are.

For those want a more powerful camera to capture exciting shots to share right out of the device, the Galaxy Camera is just for them.

The Samsung Galaxy Camera feels good in your hand and is even comfortable to use with one hand.

It is very responsive when firing off images and even when performing another function or using an app, press on the capture button, takes the Galaxy Camera straight into shooting mode.

When the device is turned on the for the first time and plays the introductory music and shows the Samsung logo, it takes quite a while for the camera to be ready to use which could prove frustrating if you wanted to shoot something straight away.

The Samsung Galaxy Camera also has to be handled very carefully – not because it is delicate – but because it’s not hard to accidentally press a physical button or hit something on the touchscreen.

But it doesn’t take long to get a feel for the camera and what it can do.

The zoom functionality is quite impressive and users can go all the way in to the 21x zoom and still be able to easily frame their subject thanks to the built-in image stabilisation.

With a device that encourages users to shoot, edit and share it will be a product that will be used continuously and place a lot of demand on the battery.

Surprisingly the battery is only 1650mAh which is far less than the 2100mAh battery found on the excellent Samsung Galaxy S III.

And what that meant was the battery is taxed pretty heavily and pretty quickly when you consider it has to power a zoom lens, a large screen plus the fact it is constantly connected to 3G and wi-fi.

If you’re considering a full day of shooting be sure to take the charger. In our testing we needed a recharge at lunchtime after constant shooting from breakfast.

The Samsung Galaxy Camera is ideal for photo enthusiasts who want to stay connected and share their high quality work without having to first transfer the images to another device.

If you’re after a fully-fledged digital camera – it is all that and more – and can produce quality images that are as good as any you’d find with other cameras in this price range.

Speaking of price, the Galaxy Camera isn’t cheap at $599 but you do get a lot of features for your money as well as a lot of creative and connectivity options.

If you’re a fan of photography, want all the connectivity of a smartphone but not the interruption of calls, then the Samsung Galaxy Camera is an ideal choice.