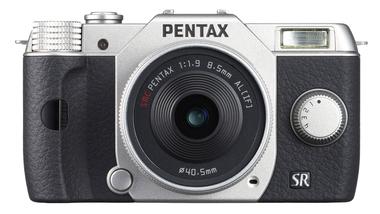 Worrying statistics to camera manufacturers revealed digital cameras were losing ground to smartphones. So where does the diminutive Q10 fit in?

That question kept irritating me until I realised the Q10’s point of difference, which is that its feature set blows smartphones out of the water.

This was far from apparent at first because using the Q10 feels a lot like using a smartphone.

Without a viewfinder you have to hold it out in front of you and frame your shot using the rear display, which size-wise is close to that of my iPhone 4S.

Also, the images off this camera have that sort of, well, squishy look about them typical of captures off a small sensor.

The Q10’s 1/2.3in 12.4-megapixel CMOS sensor is the smallest used in compact cameras and while it delivers surprisingly good images for what it is, there’s not a great deal separating the apparent image quality from the best smartphone cameras.

However, once I stopped wondering how the Q10 fits into the market and started looking closer at its myriad features, its true appeal revealed itself.

For a start, the Q10 is a system camera, offering a choice of lenses and accessories including a hotshoe-mountable optical viewfinder.

Pentax boasts it is, in fact, the world’s smallest interchangeable lens camera.

I was supplied with the 5-15mm zoom but given the eminently pocketable nature of this camera, I reckon it would be much more fun with the shorter lens barrel of the 01 prime lens, with its f1.9 maximum aperture and a field of view equivalent to a 47mm lens in the old 35mm-speak.

It would be fun to shoot candid street images with such a kit, especially as the small sensor provides greater depth-of-field compared to equivalent apertures on larger sensors.

Except that sometimes you want a shot that has short depth of field.

The Q10 steps up here with a clever mode called Blur Control, in which the camera captures multiple images and merges them together into a single image to create a picture mimicking a medium telephoto with a sharply focussed subject and a blurry background.

It’s a neat trick, although it can only be done as a JPEG in Aperture Priority and auto ISO.

Also impressive is the way Pentax has crammed so many features into the Q10, providing lots of options to suit a wide range of users, from those who just want to have fun through to photographers after creative control over their camera.

A pop-up flash swings high and wide of the body and while the benefit of reducing red-eye is obvious, it also means avoiding an ugly shadow from the 5-15mm lens that falls on the scene.

On the subject of the flash, which as a matter of interest will fire when it’s not popped up, there’s an option in the Custom menu to specify the colour balance when using the flash: unchanged, flash or auto.

Also in the same menu is an option to set the level of correction for auto white balance in tungsten lighting, either subtle or strong correction.

So? So what we have here is a petite shooter that even has these options, that’s what.

This speaks volumes for the way Pentax makes cameras, which has always been with a keen interest in the creative needs of its users.

Take a look on the front panel and you’ll find the customisable Quick Dial, which cycles through settings you’d otherwise have to dig through menus for.

I liked this feature a lot because mining camera menus is a drag; especially, I’m sorry to say, on Pentax cameras.

Pentax boasts excellent performance in low light using high ISO but I’m not so convinced, with what I regard as ugly noise artifacts at ISO 1600. Me? I’d be shooting no higher than ISO 800 with this camera.

These are all fairly standard features in cameras with larger bodies but it comes as a surprise to find them in the Q10 because the small form factor leads one to expect an auto-everything snapper for the clueless shooter.

So it’s a great little package, for sure, but I’m disappointed to say I’m not a huge fan of the image quality.

To be fair to Pentax, I have to disclose that during the whole time I had the Q10 on loan, the weather was foul and I had no opportunity to shoot in good natural light, so I’ll give the Q10 the benefit of the doubt that in agreeable conditions it will at least capture better images than a high-end smartphone can manage.

Based on the images I did manage to capture, I’d say potential buyers should do some thorough comparison shopping to assess the image quality from competing cameras, especially given the keen pricing for a camera in this category.

It’s definitely worth a look because, raw technical performance aside, there’s something endearing about this camera that’s hard to nail down.

I’ve known a few Pentax users who all spoke highly of their cameras and largely because Pentax doesn’t follow the mob when it comes to design and specifications.

Indeed, the Q10 grew on me over the short time we were together and I can understand the fondness so often shown by Pentax fans.

You can even order it in custom colours, with four grip colour options and 20 body colour options, with a simulator online at the Pentax site to test your ideas with. Too cute.