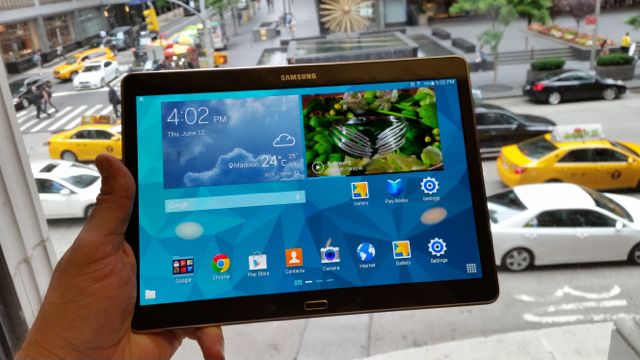 The new Galaxy Tab S is easily the best tablet Samsung has ever produced and exudes quality in features, performance and design.

Tech Guide had a hands-on look at the 8.4-inch and 10.5-inch devices which were revealed to the world in a glittering launch event held at Madison Square Garden.

The Galaxy Tab S is remarkably light and thin. You can appreciate how svelte the product is when it’s in your hands.

We stacked five credit cards next to the device and the stack was only a millimetre or two thinner than the Galaxy Tab S which is 6.6mm thick.

It still has a solid quality feel despite feeling quite light.

The design borrows heavily from the Galaxy S5 with the same dimpled back panel and identical home button and fingerprint scanner onboard.

The first thing that’s going to catch your eye is the Super AMOLED screen which is remarkably bright and clear.

It has a resolution of 2560 x 1600 which is more pixels that you’ll find in your full definition TV in your lounge room.

A side-by-side comparison of the previous Samsung tablet screen next to the latest Super AMOLED display of the Galaxy Tab S was like night and day.

The black levels are far deeper and colours much crisper and brighter.

We watched a video on the Tab S and the sharpness was not something we’re used to seeing on a tablet.

And with the amount of content we view in our tablets whether it’s at home, on the move or when we’re travelling, the extra pixels and quality is something Tab S users will really appreciate.

The devices will draw the inevitable comparisons with Apple’s iPad Mini and iPad Air.

On the performance side there are two quad-core processors onboard and that was immediately evident when we opened apps and switched from screen to screen.

The Exynos 5 Octa processor – actually a 1.9Ghz and 1.3Ghz quad-core processors working together – also come into play nicely to ensure the playback on the screen is smooth and crisp.

Even when using apps, especially gaming apps and other action games, users will appreciate the extra horsepower under the hood.

The Galaxy Tab S connects easily with the other devices in the Samsung ecosystem – the Galaxy smartphones, Gear smartwatch, Gear Fit activity band and the company’s market-leading smart TVs.

This device has made it a more compelling choice to stay within the Samsung family if you own any of these products and are looking to enter the tablet market or update your current model.

One feature that would encourage adopting Samsung across the board – especially with the smartphone and tablet – is SideSync 3.0.

This feature allows users to connect their Galaxy smartphone to the Tab S which effectively hands off all of your phone’s features to the tablet.

We easily linked the Galaxy S5 to the Tab S and could not only see the smartphone on the tablet’s screen but we could also scroll the virtual device’s screen to access any of our apps and the device’s features.

And of course we could make and receive calls and exchange text messages with the Tab S through the attached Galaxy S5 smartphone thanks to SideSync 3.0.

In this mode you can also exchange files wirelessly between the two devices.

The Galaxy Tab S is a high quality tablet that will make viewing content on the move a far better experience.

Add to that an eye-catching design, a range of innovative new features and unrivalled performance and you’ve got a tablet that’s going to give customers a serious alternative to Apple’s iPad.