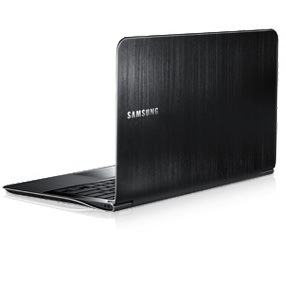 When Samsung unveiled the Series 9 ultrathin laptop most made the obvious comparison to Apple’s MacBook Air.

But, unlike most other cases when devices are put up beside Apple products, the Samsung Series 9 not only stands its ground it outshines it in some areas.

The 13.3-inch laptop has an eye-catching curved design, is just 1.63cm thick, weighs 1.31kg and has a Sandy Bridge Intel Core i5 processor.

Samsung has knocked this one out of the park.

The Series 9 is a real head-turner with an aerodynamic design and curved metal construction.

And it’s not just any old metal. The device is made of duralumin – a lightweight allow that lighter than aluminium but twice as strong. It is the same material used to build military aircraft.

It gives the appearance that the metal of the lid folds over and forms the base. But the underside of the Series 9 is plastic but the wrist rest and the area around the keyboard is the same metal as the lid.

It has a large trackpad and taken a leaf out of Apple’s book with multi-touch gesture controls that is rare for a PC laptop.

There are 21 gestures which are supported including the usual pinch to zoom, swipe and rotate and two finger scrolling on web pages and documents.

The keyboard looks remarkably similar to that of the MacBook Air but one thing the Series 9 has that the Air doesn’t is backlit keys.

When you first lay your eyes on the Series 9 you’ll probably wondering where all the inputs are.

They’ve been hidden away on each side inside a small flap. On the left is a USB port, a mini Ethernet port and a mini HDMI Out port. Over on the right there’s another USB port, a headphone jack and a microSD slot.

We would have preferred an SD card slot but leats there’s a cord included to connect a regular Ethernet cable to the Series 9’s micro Ethernet port. There was no mini HDMI Out cord included with our review unit.

What adds to the lighter weight of the Series 9 is the fact there is no optical DVD drive on board. The upside of this is that users who need their laptop with them wherever they go aren’t going to make their chiropractor richer with back and shoulder pains.

From the minute the Series 9 is activated it’s obvious it’s not just about looks and design.

The 13.3-inch SuperBright screen really jumps out at you. It has a high definition resolution of 1366 x 768 and has an anti-reflective coating which makes it easy to view in bright conditions.

This display quality opens the device up to being just as powerful and entertainment tool as it is a work horse.

The latest Sandy Bridge Intel Core i5 processor moves things along nicely along with the 4GB RAM for an impressive performance.

The speed of the Series 9 is obvious when you’re doing the important things like starting up – it boots up in about 25 seconds – and waking from sleep – it springs back to life in three seconds when the lid is re-opened again.

Performance is also enhanced with the 128GB SSD (solid state drive) on board which not only makes accessing data and booting up faster but it also reduced energy consumption by up to 86 per cent.

Battery life is also long enough to get through most of the work day at about six and a half hours.

Apart from the usual wi-fi connectivity, the Samsung Series 9 also has Bluetooth 3.0 on board which adds to ability to connect to smartphones to either share content or be used as a modem to connect to the internet.

The Series 9 is running Windows 7 but the desktop is not cluttered and weighed down with layers of add-on software. There’s just the obligatory security software pop-up from Norton reminding users to activate their subscription.

The Samsung Series 9 is not only an impressive looking device it is also filled with equally impressive features and is all powered by a fast processor.

It is on the expensive side at $2499 – that’s more expensive than the MacBook Air – but if you have the money, it would still be the device of choice of you’re looking for a lightweight laptop running Windows.