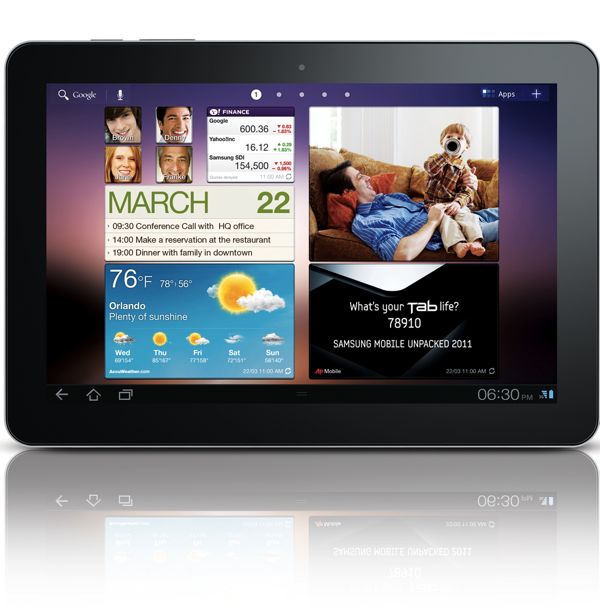 While the iPad 2 might be hogging the headlines at the moment, there’s another tablet that will also grab your attention when it’s released later this month.

It has larger 10.1-inch screen for a start and the first tablet in Australia to offer the latest Android 3.0 operating system – Honeycomb.

On the design front, Samsung’s Galaxy Tab 10.1v looks just like a glass screen. There are no physical buttons on the front panel.

On the back are two indentations that make the device easier to grip in two hands. The material here is plastic and has a texture to give it a more non-slip feel.

Around the edges are a dock connector, volume keys, an on/off switch, speakers on either side and a sim card slot.

Two of the criticisms levelled at the popular iPad was the lack of a memory card slot to expand the capacity along with the sealed design which means you’re stuck with the battery that is enclosed.

Surprisingly the Galaxy 10.1v is in the same boat – no microSD slot so you can only use the built-in 16GB of storage, and the device is also sealed shut.

But the moment you turn it on – you’ll like it even more.

Performance is excellent thanks to the 1Ghz dual core processor and the screen is dazzling with a high definition resolution of 1280 x 800.

The device is fast – apps opened instantly and we were able to switch between opens apps just as quickly.

The hardware’s impressive but the other star of the show is Android 3.0 Honeycomb.

The interface is responsive and easy to navigate. The home page allows users to pin their favourite apps to this front page with five other pages able to be customized to suit the user.

With no physical keys, the home and back keys are virtual and positioned on the bottom left corner with another to show the open apps running in the background and the ability to jump right back to any one of them.

The Samsung Galaxy Tab 10.1v is a great device to enjoying all your content with photos and videos displayed with impressive results.

Even creating your own content is possible with the device courtesy of the 8 megapixel camera. It has auto focus and LED flash.

It’s a shame there is no HDMI out slot so users can view the excellent video and picture quality directly on their HD television.

The Android Market, while still a long behind Apple’s App Store in terms of the number available, is growing rapidly.

But one area that’s not even in iPad’s ballpark is the number that are designed for Android tablets the size of the Galaxy Tab 10.1v.

There aren’t many. The other apps – which are designed for smaller Android smartphone screens – don’t always scale right for this larger screen.

The situation is only going to improve with the number of Android tablets due to be released this year but it’s a shame there aren’t more now.

The v in 10.1v stands for Vodafone who will exclusively sell the device through stores either outright or on a plan when it is released in the next couple of weeks.

The 3G connection can still connect users on the go with wi-fi also onboard to use at home or in a hotspot.

The Samsung Galaxy Tab 10.1v will be priced at $729 to buy outright which includes 6GB to use in the first three months.

It’s also available on a 12 month contract with $259 upfront plus $39 per month which includes 1.5GB data per month.

The Samsung Galaxy will naturally be compared to the recently released iPad 2 but it can boast features which won’t be found on Apple’s sought-after tablet.

With a sea of Android powered-tablets heading our way on 2011 the Samsung Galaxy Tab 10.1v will be the one to beat.