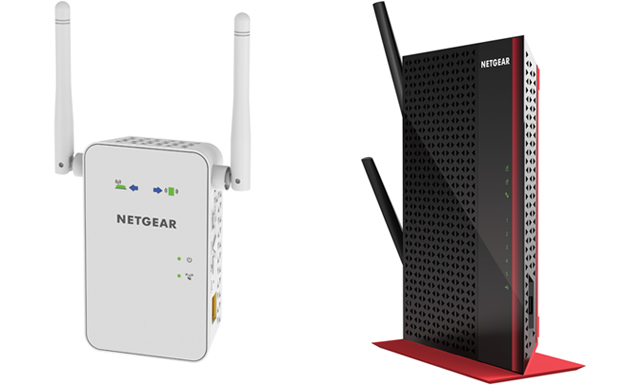 Home wi-fi networks don’t always reach all parts of your house which is why Netgear has released two new range extenders that solve the problem.

Netgear’s new EX6100 and EX6200 Wi-Fi Range Extenders can optimise your existing wireless networks to reach into those areas in the home where the signal needs strengthening.

Devices like smartphones, tablets and laptops make it possible to access the internet in parts of our homes where we haven’t before.

And some of these areas sometimes don’t have a strong wi-fi signal and the strain on the devices trying to connect to that weak signal can also run down the battery.

The answer is Netgear’s new range extender devices that can significantly strengthen your wi-fi signal in these problem areas.

They can also be used to connect wired devices like smart TVs, gaming consoles, Blu-ray Disc players and set-top boxes.

These devices support the latest 802.11ac standard and can extend these faster networks as well as being able to extend the older 802.11n networks.

The Netgear AC750 Wi-Fi range EX6100 can be plugged into a power point and boost those hard-to-reach spots on your network.

The device works with any brand of standard wi-fi router and can create dual band wi-fi networks at 2.4Ghz and 5Ghz for speeds of up to 750Mbps.

Fast Lane Technology onboard the product actually uses both of these wi-fi bands at the same time to create a higher speed connection to allow things like faster online game and smooth streaming of high definition movies.

There are two antennas on the product that help provide even better range and coverage and doesn’t require a separate power supply because it is already plugged in to the wall.

This latest version of the Netgear range extender also has arrow indicator lights on the front panel that can help users determine the ideal spot to place the EX6100 for the best results.

There’s a single Gigabit Ethernet port to connect wired devices to the Netgear product and to your high-speed internet connections.

And like its little brother the EX6100, the EX6200 can connect to any brand of wireless router.

But the EX6200 has a dual-core processor on board to maximise wi-fi performance to allow users to have high-speed wireless access anywhere on their network.

This larger Netgear range extender has high power amplifiers under the hood to extend the dual band coverage even further.

There are also four Gigabit Ethernet ports to connect even more wired products to your internet connection.

The EX6200 can be positioned near your entertainment unit where the TV, Blu-ray Disc player, gaming console and other devices can be easily linked to your network.

Also onboard is a USB 3.0 port that can be used to connect a storage device which can then be accessed wirelessly.

The EX6200 also uses Fast Lane Technology as well and this ensures that gaming and entertainment is still smooth and reliable in your home.

If your wi-fi signal needs a boost the Netgear products are easy to set up and can be up and running in minutes.