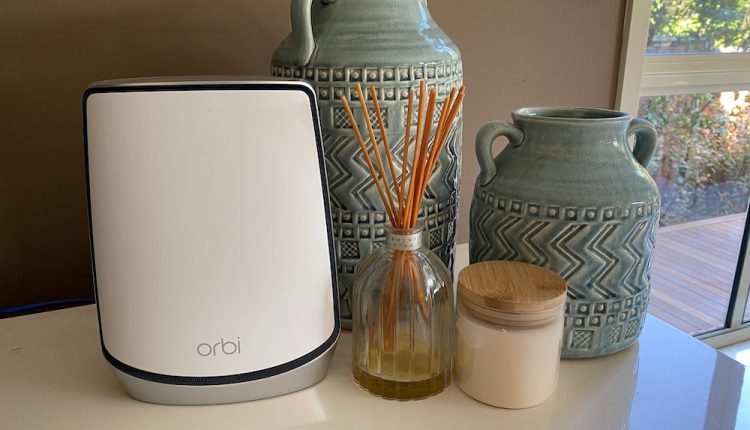 The Netgear Orbi Wi-Fi 6 is the best mesh system you can buy right now and it can put an end to your wi-fi woes and allow you to keep all of your devices connected whenever you need them.

One of the questions I’m asked most often is: how can I improve my wi-fi? One of the best solutions is the Netgear Orbi Wi-Fi 6 which can be set up in minutes and solve all your wi-fi problems.

We’re working and learning from home now and rely on our broadband connections more than ever.

And this is on top of what we’re already doing including streaming content, gaming online, accessing the internet from our laptops, smartphones and tablets and also connecting our numerous smart home devices.

All of this has put many home networks to the test and many of them have not been able to handle the load.

Netgear, one of the leading wi-fi brands with more than 20 years’ experience, has just released the Orbi Wi-Fi 6– the latest mesh wi-fi system that can create wider and more consistent wireless coverage throughout your home.

There are two Netgear Orbi Wi-Fi 6 models – the RBK852 ($1,399) and RBK752 ($949) which use a dedicated wireless backhaul which provides a dedicated 5Ghz channel for data exchange between the router and the satellites.

This reduces network congestion and allows devices to run faster on the network.

The RBK852 is designed for larger homes and offers 12 simultaneous wi-fi streams with support for more than 60 connected devices. 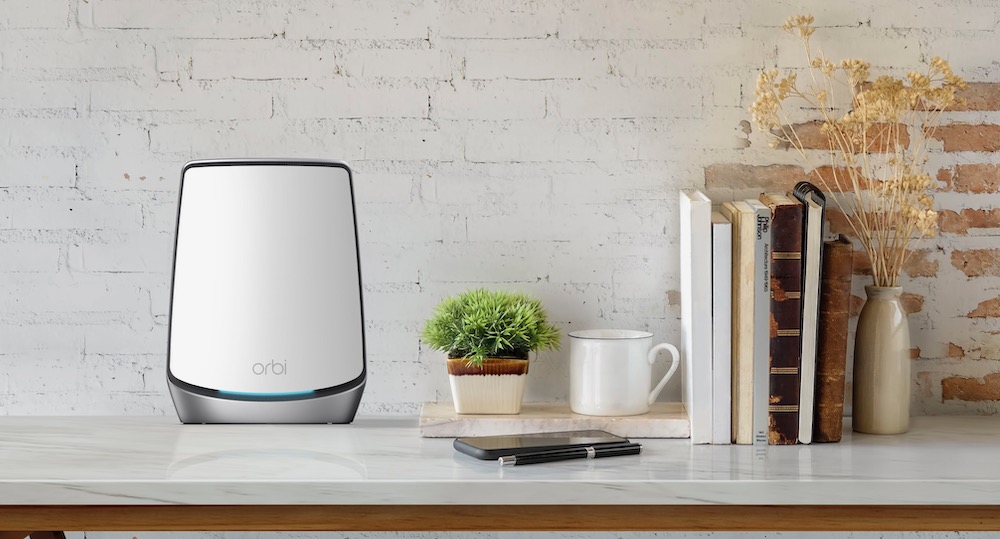 The RBK752 has the same level of wireless coverage with support for 8 simultaneous wi-fi streams and more than 40 connected devices.

They can both provide up to 465 square metres of coverage and can accommodate a two or three storey home.

For this review, Tech Guide took a look at the RBK852 and set it up in our two storey home.

Each Orbi unit is 25.4cm tall and also have four Ethernet ports on the back to connect other devices like gaming consoles and smart TVs although they can just as easily connect wirelessly. 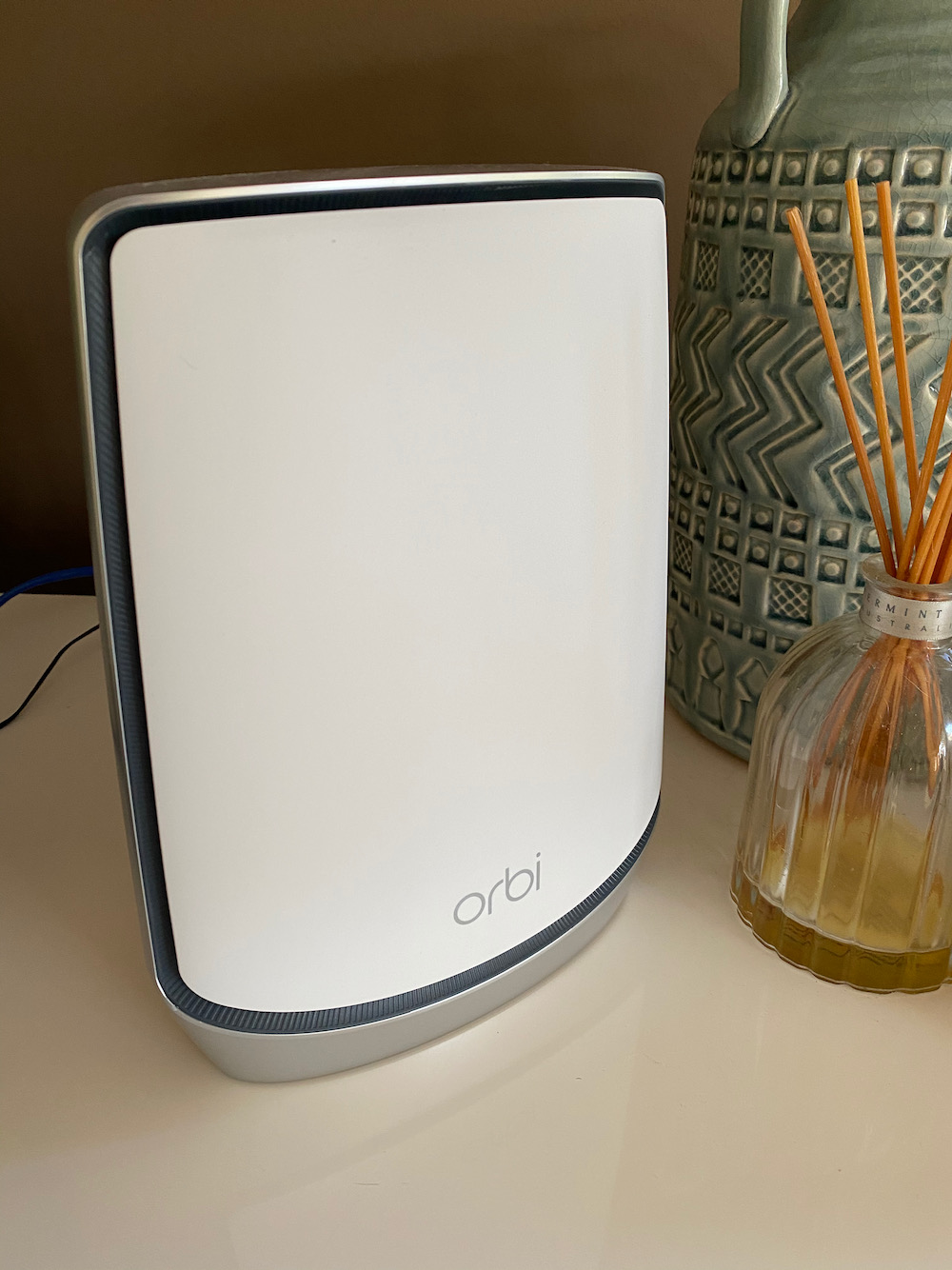 The issue with a regular modem router is the router half responsible for creating a wireless network to allow users to connect around the home is just not up to the task of managing so many connected devices and meeting our modern needs.

When working from home we need to have good speeds to share and upload documents and files and to also have enough bandwidth to handle video calls and online meetings.

And when it’s time to relax, we turn to streaming content on Netflix or Stan or any number of other streaming services. 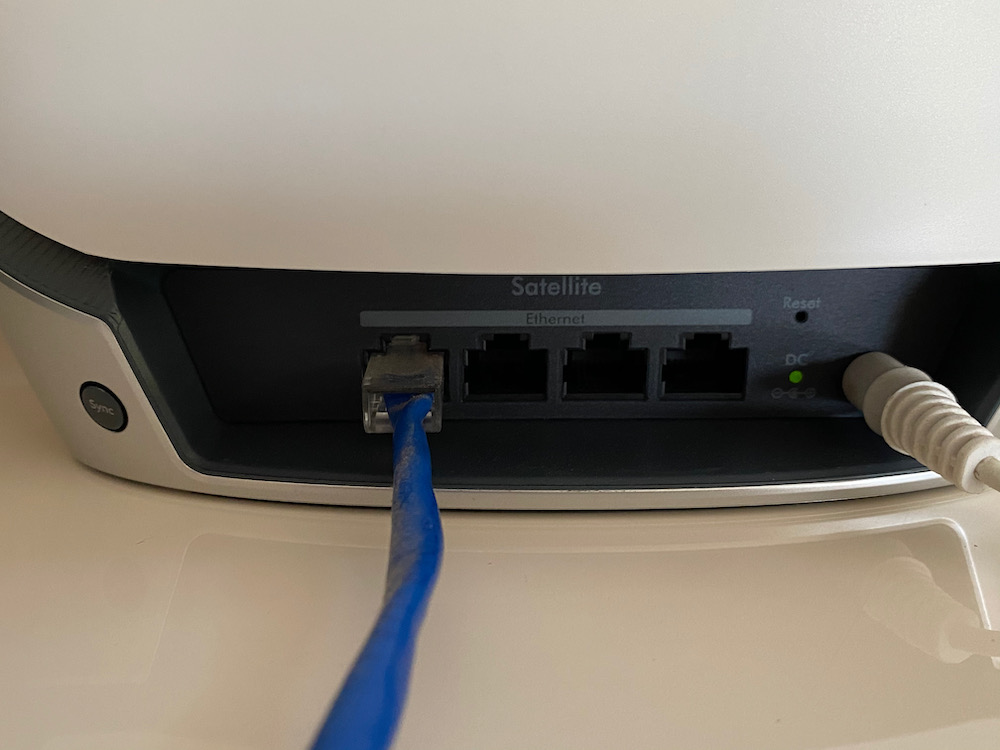 Meanwhile other members of the household might be browsing the web on their laptop, playing a game on their iPad or competing online on a gaming console.

And often this is happening all at once and most NBN-issued routers just can’t cut it.

The Netgear Orbi Wi-Fi 6 not only offers superb mesh wi-fi coverage but it also had the latest wireless standard – Wi-Fi 6 which is up to four times faster with compatible devices like the latest smartphones, laptops, tablets and upcoming next generation gaming consoles.

So basically you’re future proofing your network as well as making it more reliable and consistent.

Through the Netgear Orbi app on your smartphone, you are taken step by step through the process.

Firstly you scan the QR code on the main unit that connects directly to your modem and connect the cable and plug it into power. 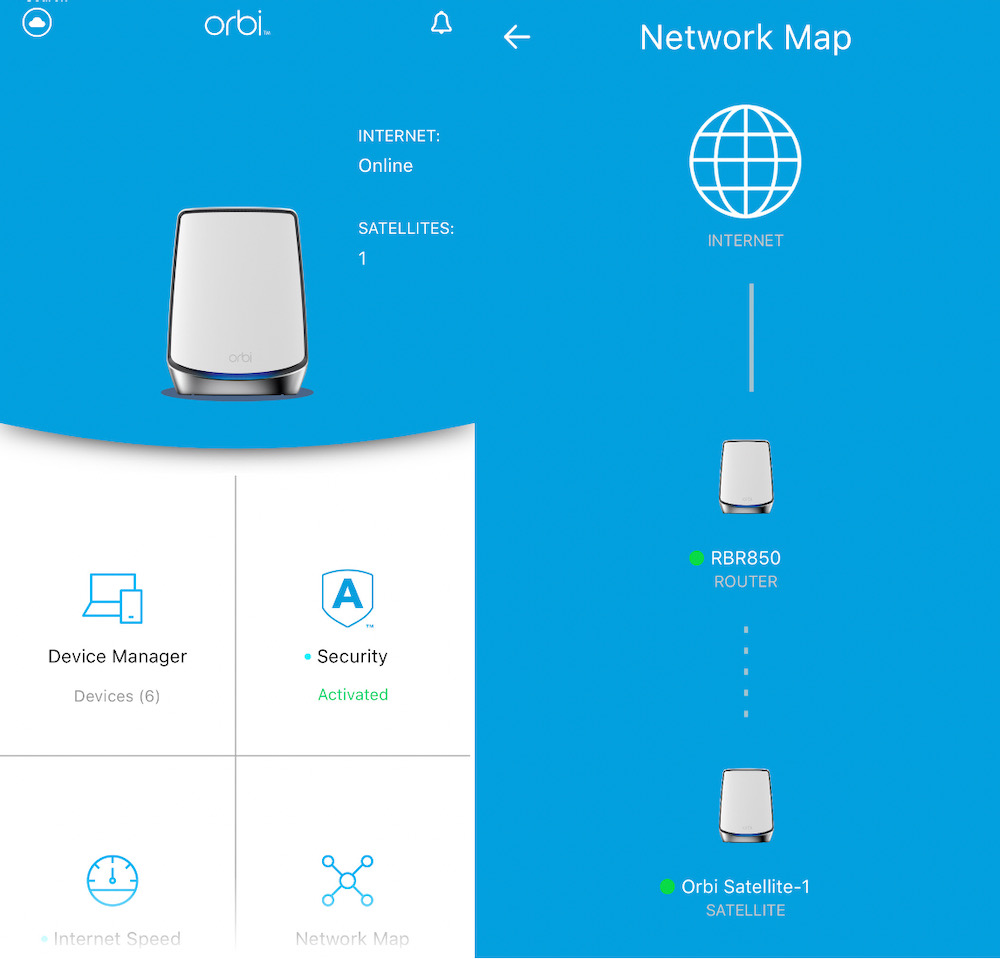 After the app detects the new Orbi it’s time to install the second satellite unit.

In our case the modem is towards the front of the house on the lower level and we placed the satellite towards the back of the same level of our house.

Again, with a quick QR code scan, the unit was detected and our new network was created.

The finishing touches was renaming the network and setting a password and we were done. 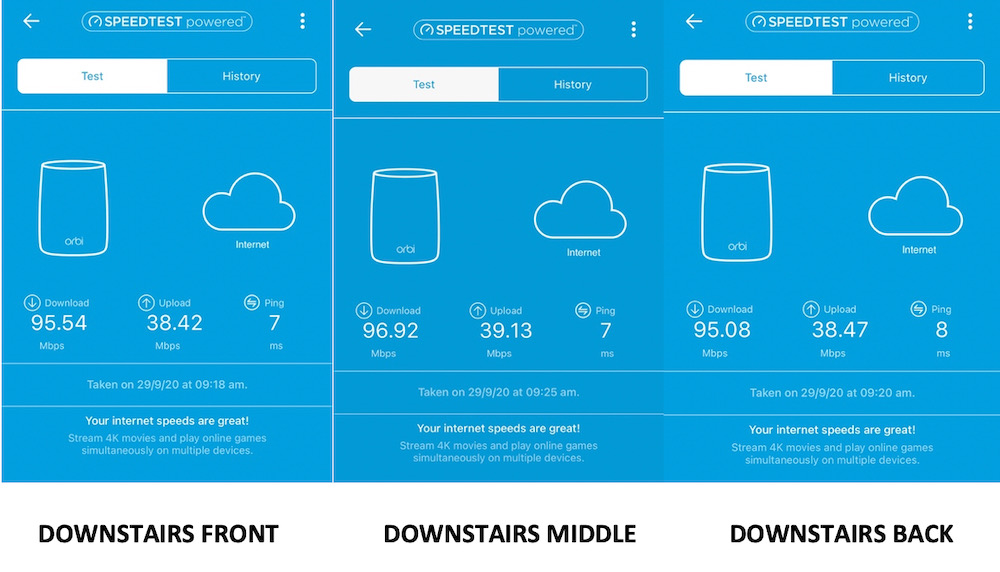 No longer than five minutes and the Netgear Orbi Wi-Fi 6 was already up and running.

The app not only helps you set up the network but also allows you to manage it as well.

You can see the devices connected to the network and also see an alert whenever a new device connects.

You are also able to monitor the health of the network and perform speeds tests to ensure things are running properly.

There’s also a free month’s trial of the Netgear Armour – an internet security system that looks after all devices at the router level that can usually prevent a security issue even before it reaches the devices on your network. 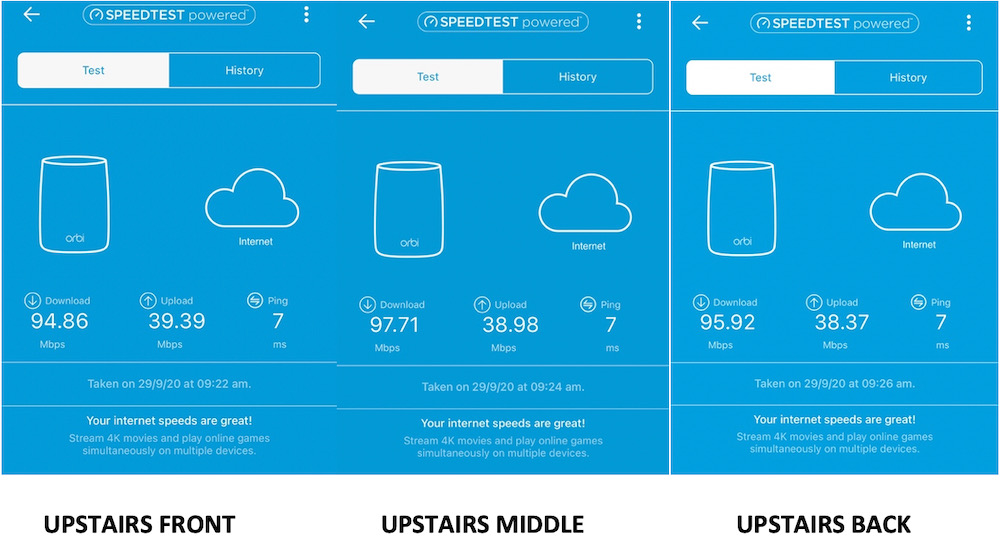 You can also access wi-fi settings and also turn on guest wi-fi that allows for connection without sharing your network password.

Once it’s set up there is nothing more to do except enjoy the fast and consistent speeds.

The Netgear Orbi can also automatically assign the traffic on your network to the appropriate 2.4Ghz or 5Ghz band on so there’s no need to get complicated with it – a welcome feature we’d imagine for most users.

And for those who do want to tinker with the networks and still enjoy mesh wi-fi coverage and Wi-Fi 6, Netgear also offers the Nighthawk Mesh Wi-Fi 6 system which comes with three base stations.

When you’ve got Orbi up and running, you can get the same speeds throughout your home – not just when you’re in the same room as the modem.

That’s the biggest frustration for customers – the weakness of their wi-fi even one or two rooms away from the modem where they want to stream a 4K movie.

With the Netgear Orbi Wi-Fi 6 we were able to enjoy the same speeds in every corner of our two-storey home.

Downstairs where the modem is located the Orbi achieved speeds of 96.92Mbps down and 39.13Mbps up.

Then we headed upstairs at the very front of the house we got 94.86Mbps down and 39.39Mbps up.

In the middle of the second level in the hall way between two of the bedrooms the speed was actually 97.71Mbps down and 38.98Mbps down – that’s faster than the speeds we achieved beside the modem downstairs.

And finally in the ensuite of the master bedroom which is upstairs and literally at the farthest corner of the house away from the modem the speeds were 95.92Mbps down and 38.37Mbps up.

And I know it was working fine because none of my kids or my wife ever complained that the internet was slow or unavailable even when they were streaming Netflix and playing games.

But when you consider the money you’ve invested with a new smart TV, a laptop computer, a gaming console and the smart home products designed to provide security and convenience, we think it’s a worthy investment.

That’s how important a home’s wi-fi has become – it’s an investment.

We not only rely on it to keep us connected and entertained but we now also need it to do business, do our jobs and allow our children to learn.

You might have paid top dollar for the fastest NBN speeds at home but if it’s being let down by the router then you’re not getting the most out of it.

It’s like owning a Ferrari but only putting the cheapest tyres on it. 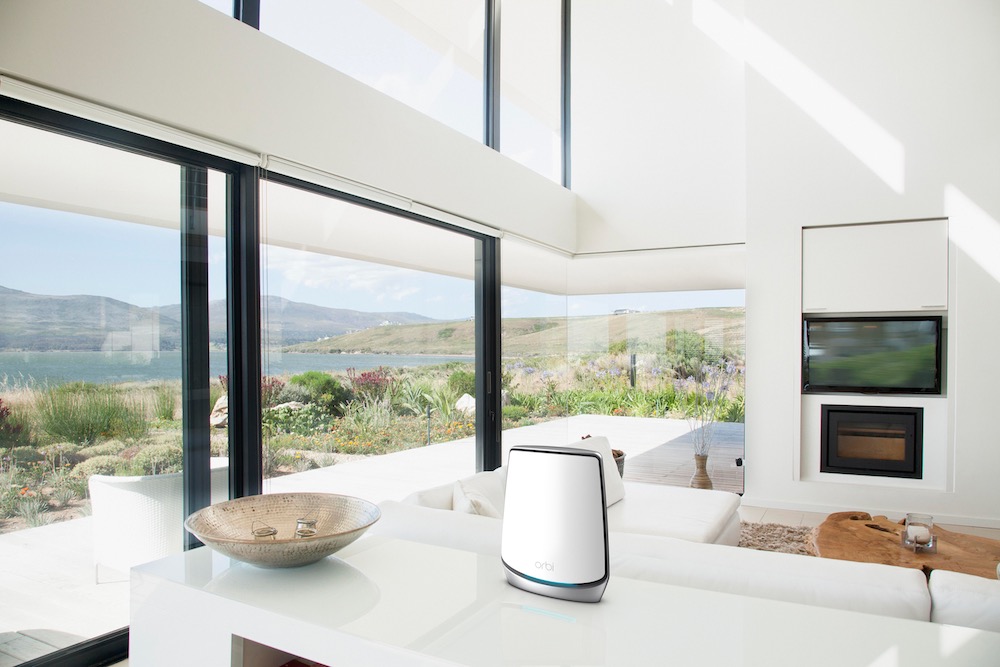 The Netgear Orbi Wi-Fi 6  is the best mesh wi-fi system hands down.

Yes, there are cheaper mesh system but they also offer a fraction of the coverage and reliability.

If you want to see the results and take comfort in the fact you and your family and devices and appliances and smart products are all connected securely and reliably, then you’ll be glad you decided to pay a little extra for the Netgear Orbi Wi-Fi 6.

The Netgear Orbi Wi-Fi 6 is the best mesh system you can buy right now and it can put an end to your wi-fi woes and allow you to keep all of your devices connected whenever you need them.