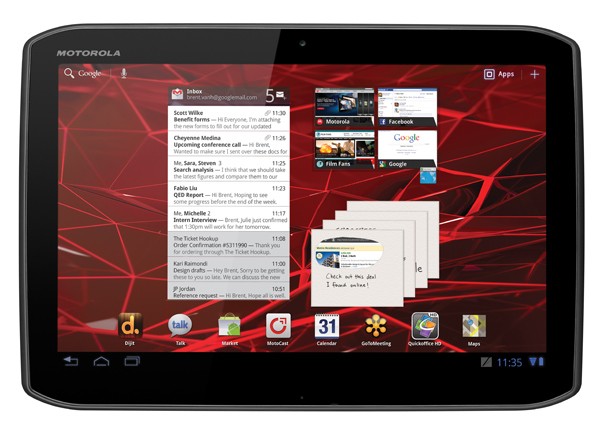 Motorola’s XOOM 2 tablet is a big upgrade over the original device released last year. It has been redesigned and includes new features and improved performance.

Running Android 3.2 operating system, the Motorola XOOM 2 has done a good job to stand out from the tablet crowd.

Motorola has also taken some cues from it popular Razr smartphone and the XOOM 2 has inherited some its DNA.

The standard look for a tablet has been a four sides black frame around a screen.

This is not what you get with the XOOM 2. Motorola decided to cut off the corners to technically it has eight sides which makes a nice point of difference.

It also has rubberised tapered edges to make it easier to grip.

There is a front 1.3 megapixel camera and a 5 megapixel rear camera which can capture full high definition 1920 x 1080 video.

Along the top edge is the 3.5mm headphone jack while the on/off/lock and volume controls are on the curved right edge.

Being on the curve these buttons were sometimes difficult to locate and also difficult to press once we did find them.

Another minor criticism is not easy knowing which is the right way up. The Motorola logo is hard to see clearly as is the front camera and with no physical home button we found ourselves picking up the XOOM 2

The bottom edge features a micro USB and micro HDMI ports along with the sim card slot and microSD card slot to supplement the 32GB internal memory.

The Android 3.2 operating system onboard the XOOM 2 will be upgradeable to the Android 4.0 Ice Cream Sandwich in the near future.

One of our favourite features included with the XOOM 2 that we first saw with the Motorola Razr smartphone is MOTOCAST. This app can stream your own content from your home or office computer, PC or Mac, for easy access to your music, movies, pictures and other files.

With MOTOCAST, users don’t have to get the cables out and take up memory saving all the files they’d like to carry around. They can now be streamed instead.

MOTOPRINT is also included and allows for users to print wirelessly from the XOOM 2 from compatible apps.

Floating Notes is another handy app that lets users jots no matter what app or task they happen to be using. Unlike a Sticky Note the Floating Note can be anywhere you need it when using the XOOM 2.

One word you can definitely use to describe the Motorola XOOM 2 is fast and that’s all thanks to the 1.2Ghz dual core processor.

This certainly moves things along when using apps, playing games and switching between tasks.

That speed also comes in handy for business users who can access view and edit their Microsoft Office files on the XOOM 2 using the QuickOffice HD app.

There’s also enterprise grade security aboard along with Active Sync for work emails, contacts and calendar.

Connectivity is achieved either through wi-fi or 3G on the Telstra network.

The Motorola XOOM 2 is a huge improvement over the original with tweaks in all the right places.

In a sea of Android tablets, the XOOM 2 has enough points of difference to stand out.

For those who don’t want to spring for full $720 can also buy the device on a two-year contract that includes data through Telstra.