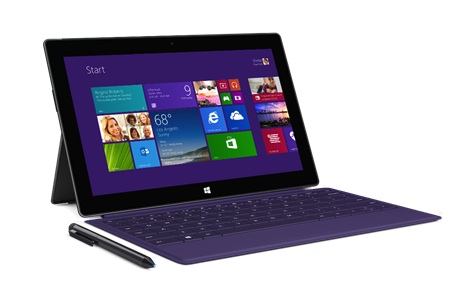 Microsoft has introduced two new additions to its Surface tablet range – the Surface 2 and the Surface Pro 2 – which will be available in Australia from October 22.

The Surface 2 also has a longer battery life which can last for up to 10 hours – a 25 per cent improvement over their predecessors.

They both also have an upgraded dual angle Kickstand so it’s comfortable to use whether it’s in your lap or being used on a desktop.

The Surface 2 is powered by an NVIDIA Tegra 4 processor and now includes a USB 3.0 port that offers four times faster transfer speeds than USB 2.0.

Surface Pro 2 has a fourth generation Intel Core i5 processor under the hood that dramatically increases the performance of the device to match that of a laptop or desktop.

A new docking station will also be available for the Surface Pro 2 in early 2014 and, once connected to the tablet, will allow users to connect an external monitor, full sized keyboard, a printer, speakers and other peripherals.

Also unveiled were new Touch and Type Covers that can not only protect the Surface screen but also double as a keyboard.

The devices will be available through the Microsoft website and in-store ay Harvey Norman and JB Hi-Fi.

User can pre-order the device from here.