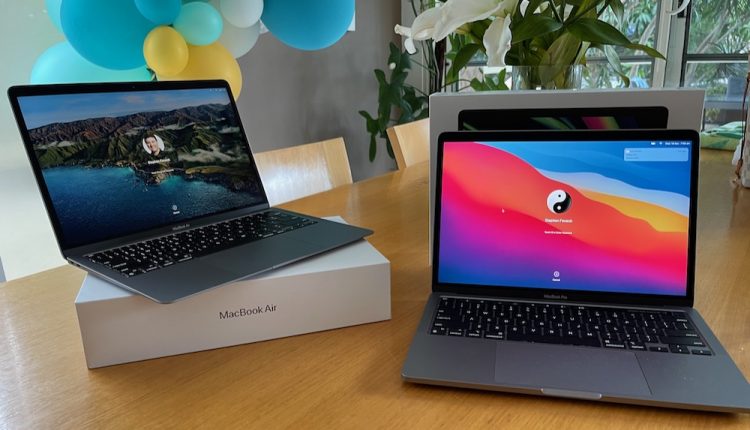 The M1-powered MacBook Air and MacBook Pro is a stunning improvement in both performance and battery life. We have not seen a bigger improvement from one generation to the next. It is a truly remarkable achievement.

If we had to sum up our reviews of the new MacBook Air and 13-inch MacBook Pro powered by Apple’s new M1 processor in one sentence we’d say – “better and faster with brilliant battery life”.

The extra speed is obvious even for simple things like waking from sleep, unlocking with your fingerprint and opening applications which now snap open in an instant.

But the real improvements can easily be seen when using more sophisticated applications like Final Cut Pro, Adobe Photoshop and when playing graphics-heavy games.

Probably the most dramatic improvement you will see is the battery life.

We have never seen as big an improvement in battery performance from one generation to the next than we’ve experienced with the new MacBook Air and 13-inch MacBook Pro.

It was like having a second reserve battery because we had almost twice as much battery life.

Thanks to the M1 chip, these new Macs run on the computer equivalent of the smell of an oily rag. 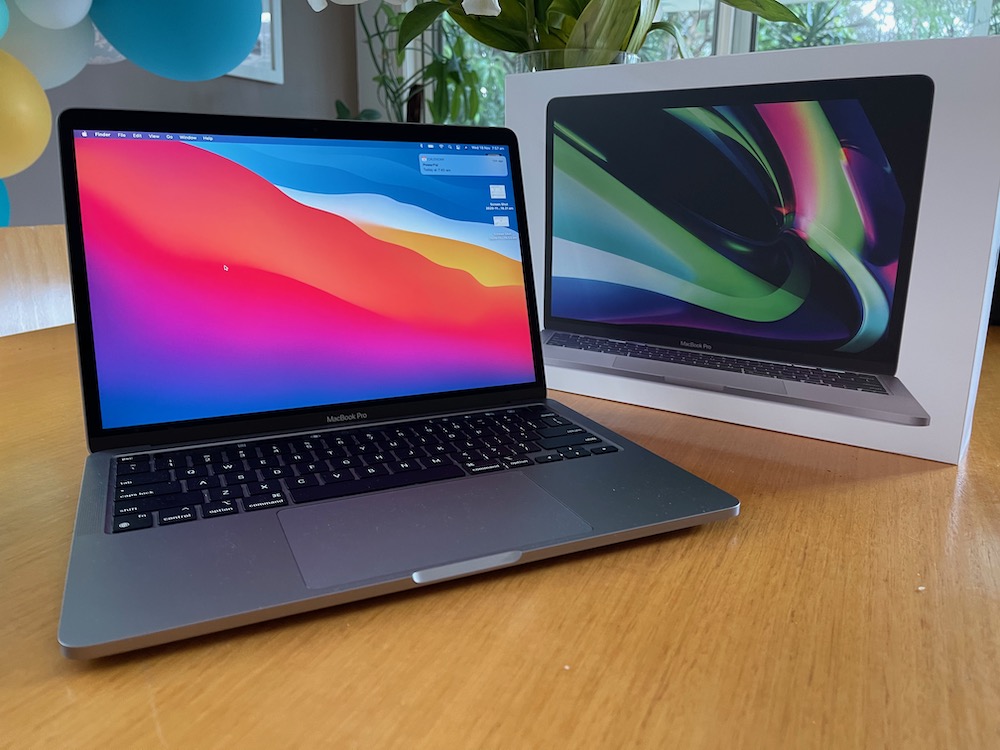 It’s all thanks to Apple’s brand new silicon – the M1 chip which beautifully unites the hardware and the macOS Big Sur software into one hell of a powerful machine.

The M1 chip is the first in what will be a family of SoC (system on a chip) processors designed for Apple’s Mac computer line-up.

Expect to see updates over the next two years as the company transitions the entire Mac portfolio to its own silicon.

These updates will include the iMac and iMac Pro and the 16-inch MacBook Pro.

But the first cab’s off the rank are the MacBook Air, 13 inch MacBook Pro and the Mac mini.

Tech Guide has reviewed the MacBook Air and 13-inch MacBook Pro and found they offer a world of improvement that you’ll easily notice whether you’re a casual user or a mobile creative professional. 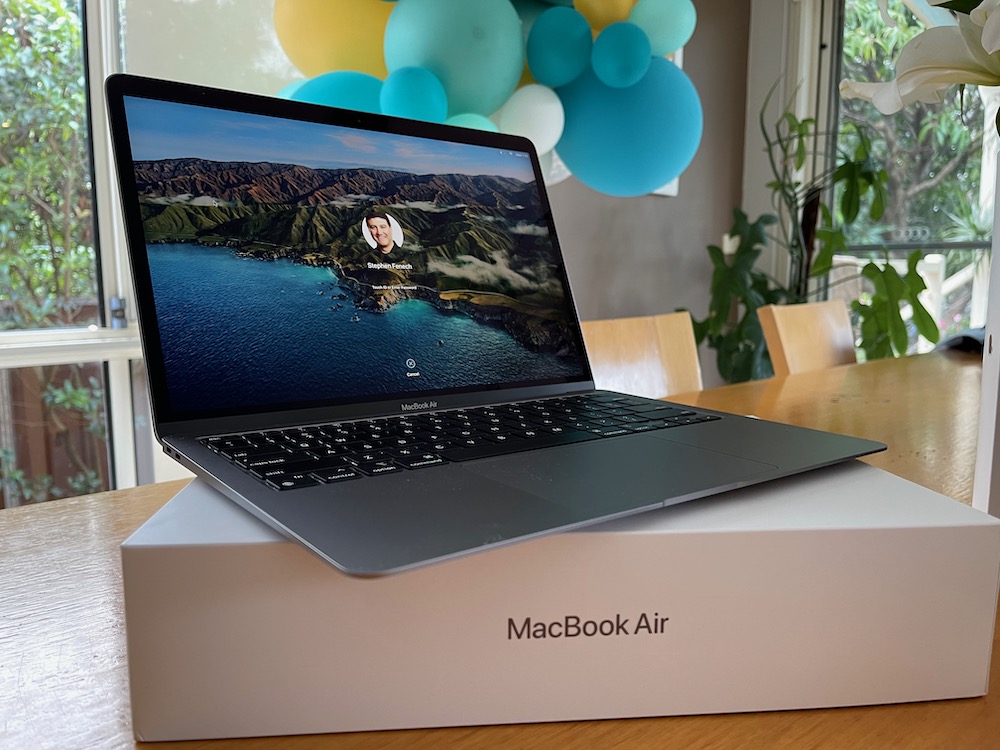 Design-wise, the MacBook Air and the 13-inch MacBook Pro are identical to the previous generation.

The amazing performance of the M1 chips start with the 8 core CPU and up to 8 core GPU which achieve the Holy Grail for a processor which is vastly improved performance while using very little power. 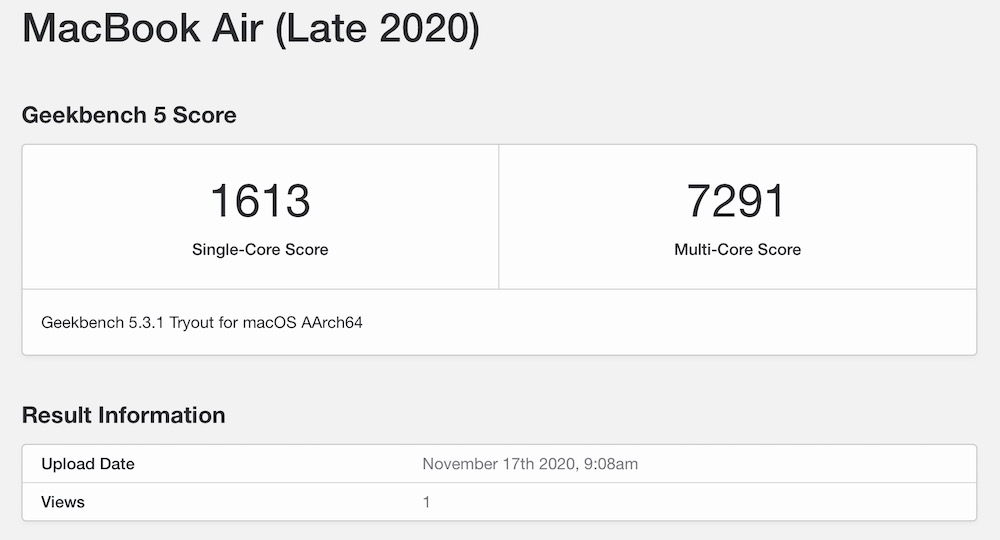 The fact it’s also an SoC means it is able to combine multiple discrete chips like CPU, GPU, security and memory – usually spread out on a motherboard – into a single tiny chip.

We could go into intricate detail about the key features of the M1 chip including its eight core CPU, its four-core high performance calls, its four high efficiency cores and it’s performance controller. 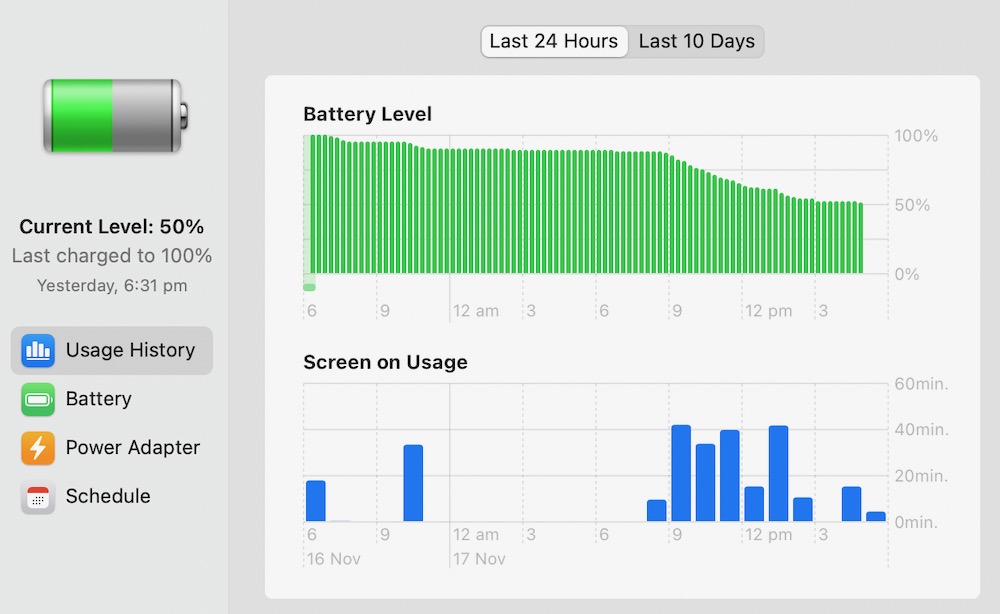 But at the end of the day for Tech Guide readers, it’s all about how the new MacBook Air and 13-inch MacBook Pro perform.

Suffice it to say that between the M1’s advanced machine learning, the neural engine that can compute up to an incredible 11 trillion operations per second and the unified memory architecture (which now replaces RAM) – you’ve got plenty of grunt when you need it.

Not everyone who buys a new car wants to know the intricacies of how the engine works. They just want to know the car will perform when they need it to and in the way it was described. The other thing that plays a major role in these knew Macs stunning performance is macOS Big Sur – the latest version of Apple’s desktop operating system – which works hand in glove to take full advantage of the power and capabilities of the M1 processor.

One thing we noticed right away was the instantaneous wake from sleep, apps launching instantaneously and the Safari browser is noticeably more responsive.

And just navigating the system was a lot smoother and snappier.

But when get behind the wheel of a Ferrari you want to take it somewhere so you can put your foot down. 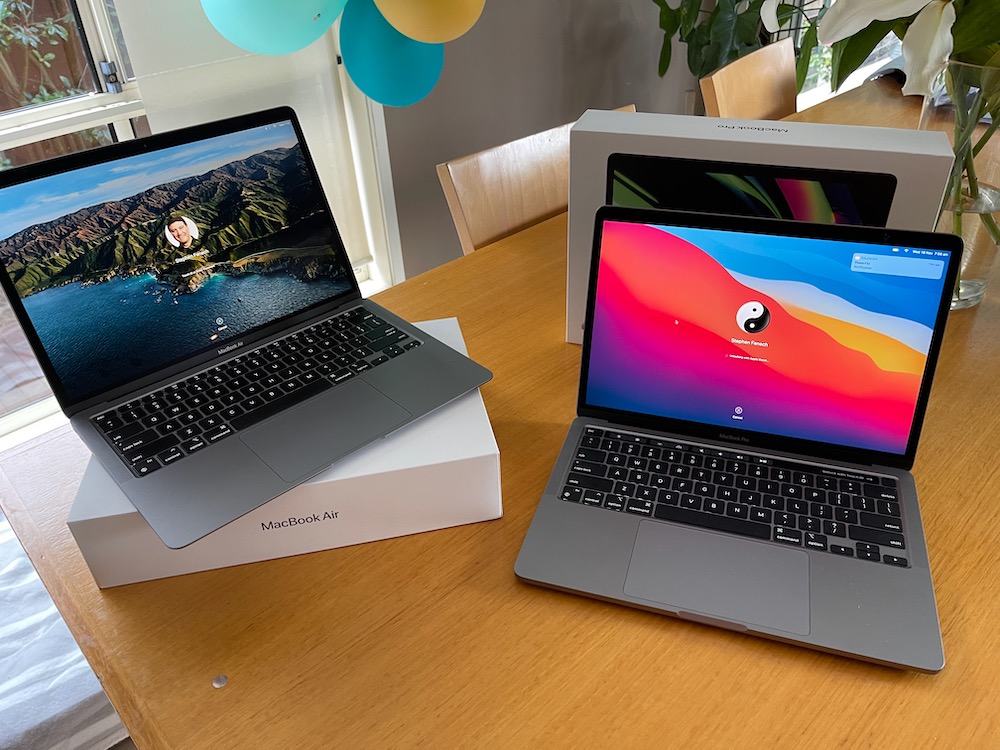 In the case of the MacBook Air and the 13-inch MacBook Pro – it was apps like Adobe Photoshop and Final Cut Pro.

With Photoshop you’re able to add and adjust effects and crop large images instantly as well as export images faster.

But we noticed a huge difference when using Final Cut Pro which we use to edit our review videos.

With the MacBook Air and the 13-inch MacBook Pro we noticed an improvement when adding titles and effects and even exporting the project as a file.

And these new Macs didn’t even raise a sweat. 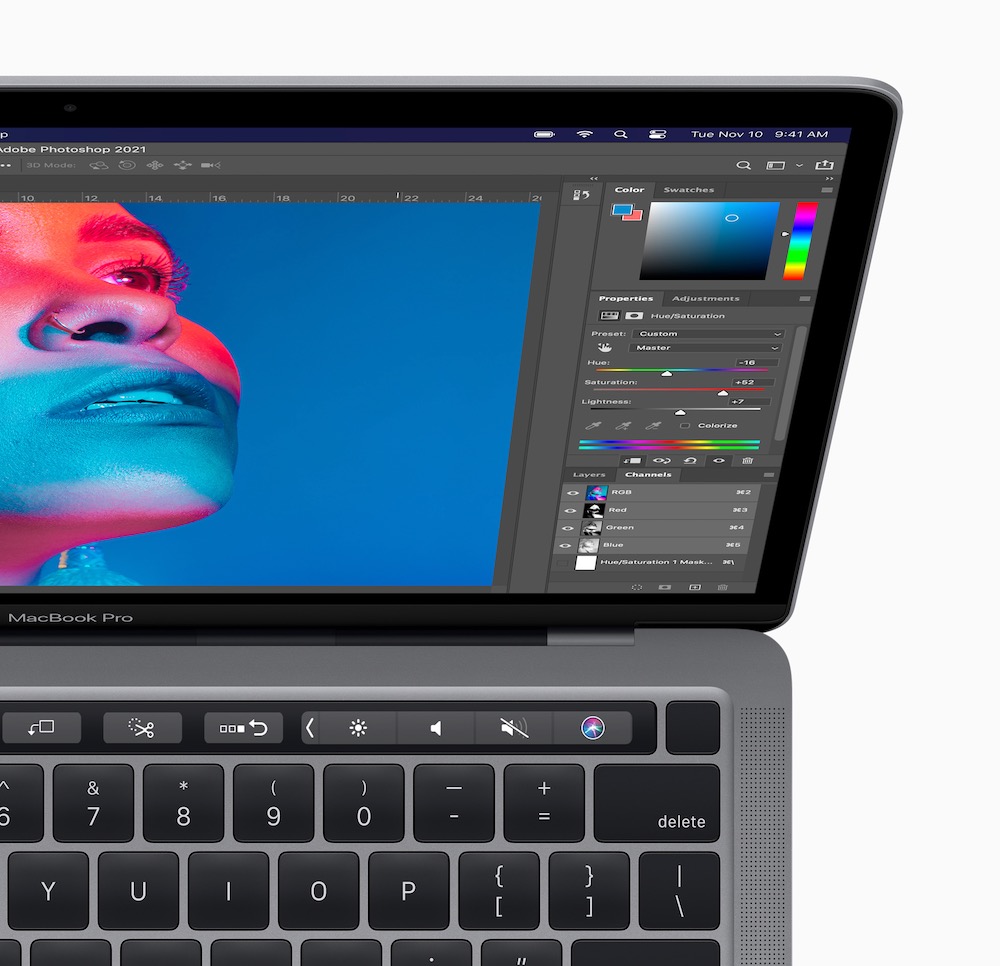 For those working with 4K and even 8K video will see how well these machines can handle that sort of load.

And playing games like Shadow of the Tomb Raider offers 3.1x faster graphics performance. What does this mean? It means the games looks smoother because it is able to be played at a higher frame rate. 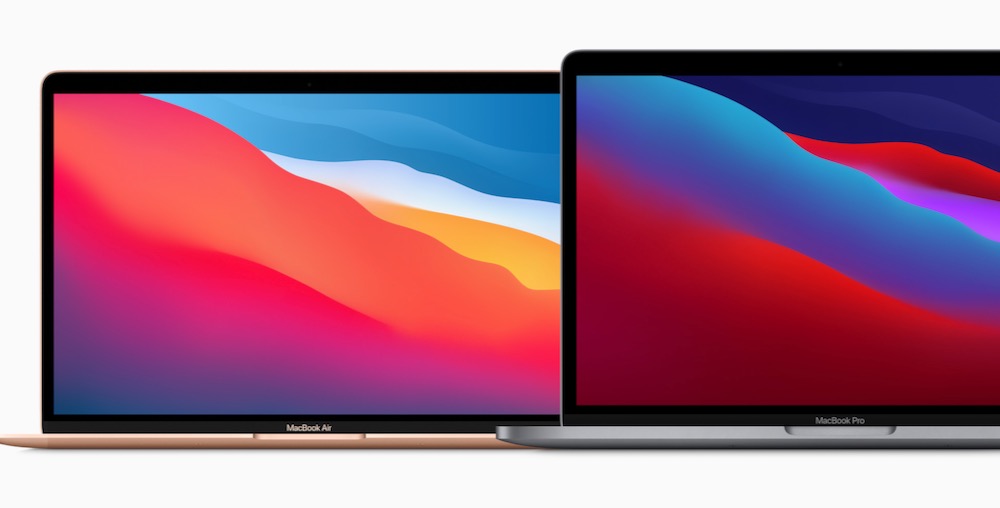 All the apps that come pre-loaded on an M1-powered Mac and all apps made by Apple are optimised for the new silicon.

It has a new Universal platform which app developer can utilise so their applications can still run well on Intel-based Macs and M1 Macs.

If the apps haven’t been transitioned to Universal versions, there’s also Rosetta 2 which is an Apple-made application that will allow them to run seamlessly on M1 Macs running macOS Big Sur.

It’s also possible to run your favourite apps that you use on iPhone and iPad on the M1 Macs as well.

Apps you bought on the iPhone and iPad can simply be downloaded to the Mac at no extra cost.

They both have a 13-inch Retina Display and two Thunderbolt/USB-C ports and also have Wi-Fi 6 compatibility for faster wireless performance.

The big difference is in the thermal performance with the 13-inch MacBook Pro able to perform at higher speeds for longer.

The MacBook Air, has a fanless design which means it’s silent but it has it has its limitations when the chip is powering through a task and the chip starts to heat. 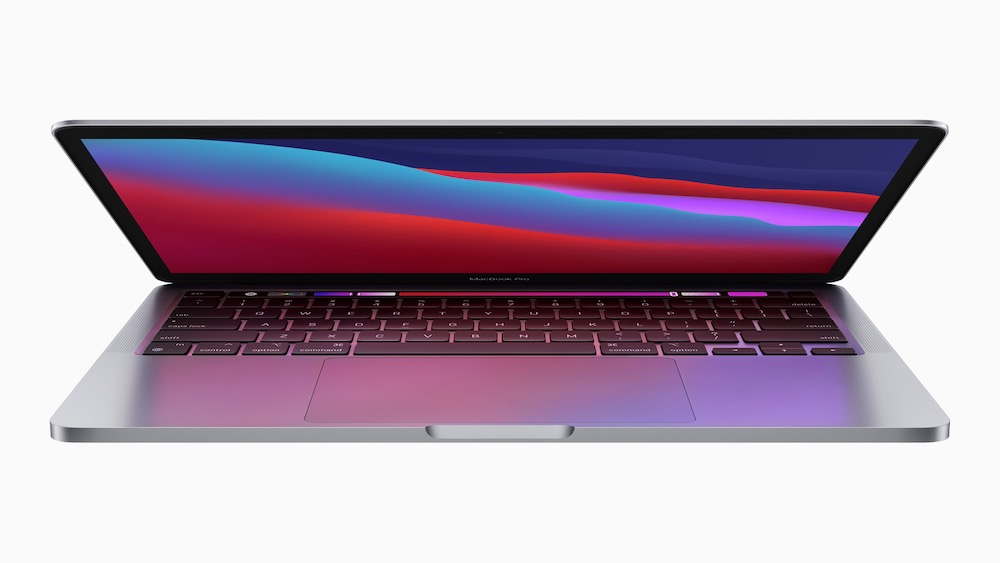 Rather than overload the system, the MacBook Air can throttle back to stay within its thermal limits.

The 13-inch MacBook Pro can go faster for longer thanks to its superior thermal performance and really churn through the work.

But we think probably the best result people are going to see with the new M1 MacBook and the 13-inch MacBook Pro is the battery life.

Having performance in the past with a laptop always came at a cost – and that was usually battery life. 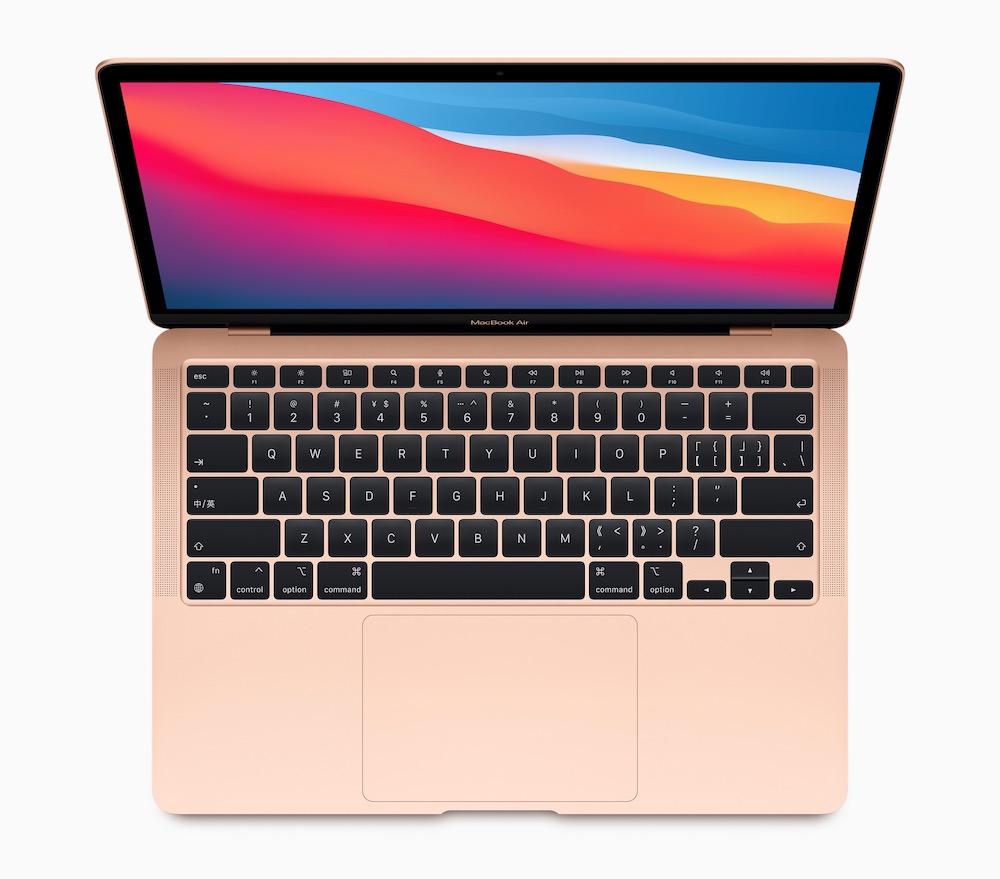 And that was with our workflow which is a whole lot less intensive than other mobile professionals.

They might not hit our level of battery life but they will be vastly better than what they got the previous MacBook Air and 13-inch MacBook Pro.

The M1-powered MacBook Air and MacBook Pro is a stunning improvement in both performance and battery life. We have not seen a bigger improvement from one generation to the next. It is a truly remarkable achievement.