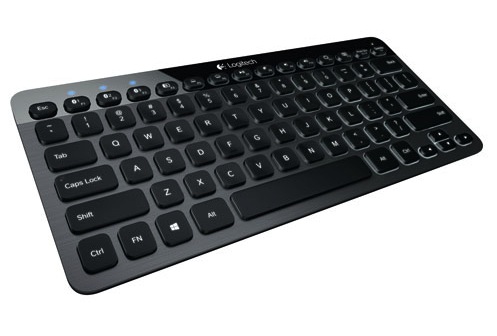 Many users just can’t do without a keyboard, especially for typing out those longer messages and documents, and that makes the Logitech K810 very handy.

The Logitech K810 Bluetooth Illuminated Keyboard can connect to a PC, a tablet or smartphone – or all three if necessary.

This is made possible by the three Bluetooth keys in the top row of the keyboard that lets you switch between paired devices at the press of a button.

Users can charge the K810’s keyboard using a microUSB cable attached to a computer or a power point.

The Logitech keyboard is quite thin and light so it’s no effort to take along with you to use on the go with your iPad, iPhone or Android device.

And it can even sit on the desktop to provide a wireless solution for your PC or Mac. The keyboard has been optimised for Windows 8 but will still work with an iMac or a MacBook laptop.

It is made of brushed metal with a black plastic strip at the top of the keyboard.

The keys are nicely spaced apart so users can type accurately and comfortably.

A built-in light sensor can also automatically activate the keyboard’s backlight so you can still see what you’re typing.

This is a particularly handy feature for power users who need to work in darker environments like the cabin of an aircraft mid-flight.

And only the characters on each key are illuminated so you’ll only see the keys and not be distracted by overly bright light.

The level of illumination will also adjust automatically to suit the conditions but it is still possible to control this manually.

There’s even a proximity sensor so the K810 can detect when you’re near and activate the keyboard and backlight if needed when you’re ready to work again.

This is a key energy-saving feature so the battery isn’t winding down while the device is unattended.

The Logitech K810 Bluetooth Illuminated Keyboard is available now and is priced at $149.95.