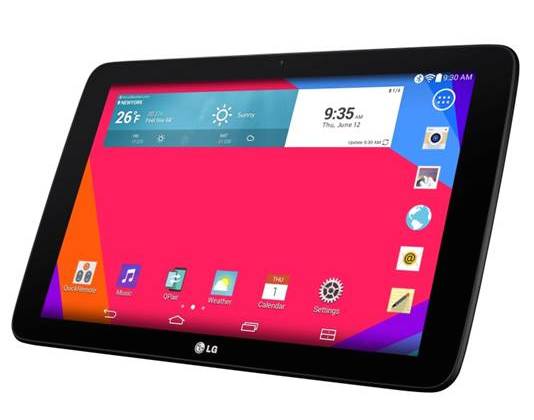 LG is set to shake up the tablet market in early August with a new competitively priced 10.1-inch device that includes a number of useful new features.

It looks like it’s going to be a busy month for LG with the company releasing the new G Watch, the G3 smartphone and the G Pad 10.1 within a few days of each other.

The LG G Pad 10.1 is the company’s first venture into the larger tablet space after releasing the impressive G Tab 8.3 last year.

Tech Guide had a brief hands-on with the LG G Pad 10.1 which has 16GB internal memory and a microSD card slot to expand the capacity further.

At $399 it’s going to attract customers who are looking for a value and feature-packed Android tablet.

Speaking of features, the G Pad 10.1 has inherited a few from the LG G3 smartphone including Knock On codes, Q Pair, Dual Windows, Touch and Shoot and a new way to shoot selfies.

Knock On allows users to set up their own code – a set of taps on the screen – to unlock the tablet and gives the same option to up to three other users of the device who can set up their own profiles.

This is a handy feature if the tablet shared with other family members at home.

Q Pair makes it possible to pair your Android smartphone to see who is calling or messaging. You can’t answer the call on the G Pad 10.1 but you can screen your calls and reject the ones you don’t want to answer.

Dual Windows means you can run two apps at the same time for true multitasking.

There is a 5-megapixel rear camera and a 1.3-megapixel front camera with Touch and Shoot that lets you focus and capture your image with one touch.

And if you’re a selfie fan the G Pad 10.1 makes it easier to capture yourself.

Simply hold up your flat palm to the camera until it recognises you and, when you’re ready to take the picture, simply make a fist and it starts a three-second timer.

There’s no need to twist your arm into an impossible angle to hit the capture button any more.

The device is running Android 4.4 KitKat and is powered by a quad core 1.2Ghz Qualcomm Snapdragon processor.

And with an 8000mAh battery onboard, usage has been listed to run for up to 8 hours on a full charge.

A separate cover is also available for $60 so users can place the G Pad 10.1 at a comfortable typing and viewing angle.

It will be available to buy from Harvey Norman, which will have an exclusive red model along with the regular black device, Betta Electrical, The Good Guys and Bing Lee.