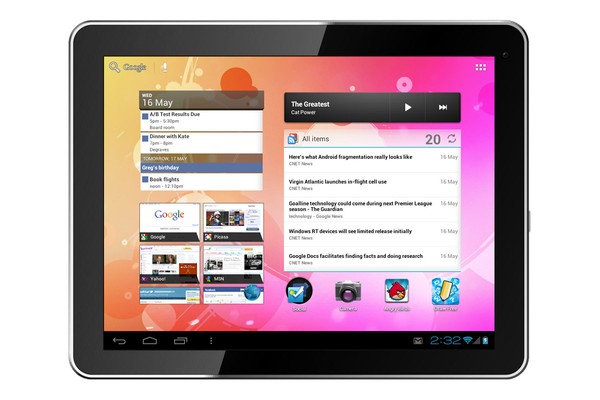 Kogan’s 10.1-inch Agora Android 4.0 tablet offers good value with a long list of features that comes with a sub-$200 price tag that will really grab your attention.

When the device was first announced along with the price, it sold out within hours. Even now the Kogan site is listing August 10 as the earliest dispatch date.

So just how good is a tablet that costs less than $200? At that price the Kogan Agora offers tremendous value.

The build quality isn’t quite in the Apple iPad ballpark but still quite acceptable.

The right side is packed with ports including micro USB to get files on and off the tablet, an HDMI Out port to watch the Agora’s screen on your TV, plus a microSD slot, headphone jack and, along the top edge, the volume up and down keys.

The button and port layout took a little while to grow accustomed to especially having the volume up and down keys (top edge) so far away from the one/off/lock key (bottom right edge). They’re usually together on similar devices.

Huge tick to Android 4.0 powered Kogan for including so many ports – none of which will be found on the iPad or the majority of Android tablets on the market.

For a device that is worth less than $200 – the Kogan Agora certainly punches above its weight.

Under the hood is a 1GB ARMv7 processor with 1GB RAM – less powerful than its competitors which is why you’ll notice a slight lag opening and running basic apps and loading web pages.

But that’s certainly not a deal breaker at this price.

The screen is easy to navigate without too much lag.

With the virtual keyboard, typing short phrases and web addresses was OK – there was a lag between hitting the key and the letter appearing on the screen.

It was a little frustrating trying to type longer documents which leads us to believe the device is a better content consumption device than a content creation device.

While browsing it took a little while to completely load the page so doing things like pinching to zoom weren’t always instant.

In fact using the device as a media player for your music and movies is probably the best use of the Kogan Agora’s abilities.

The Google Play Store is also front and centre to allow users to download apps optimised for the larger tablet screen.

There is a front facing 0.3 megapixel camera and a rear 2-megapixel camera which are nothing to write home about. But they come in handy to make video calls and if you can’t use your smartphone’s camera.

On the battery side, the device ran for just on five hours for us with heavy usage which is significantly shorter than the eight-hour battery life quoted in the specs.

The Kogan Agora 10.1-inch Android 4.0 tablet is good value in the features to price ratio.

For less than $200 – $179 for the 8GB model and $199 for the 16GB capacity model – it’s in the price range that will appeal to those looking to invest in their first tablet or an extra tablet or to give to one of the kids.

Listen in to the Two Blokes Talking Tech – episode 71