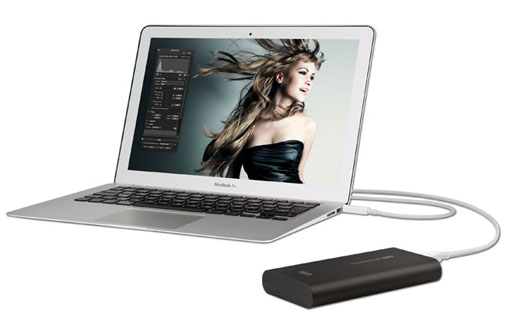 Elgato has released a portable solid state drive which, combined with the new superfast Thunderbolt connection, provides the fastest way to transfer data on and off your computer.

Available in 120GB and 240GB capacities, the Elgato Thunderbolt SSD portable can move your content at up to a blistering 270MB per second.

The device is relatively small – it’s slightly larger and thicker than an iPhone – and draws its power directly through the Thunderbolt port which means it doesn’t require a separate power cable making it truly portable.

With high speeds at your disposal, copying large files can now be completed in a few seconds instead of a few minutes.

This sort of speed will appeal to users who are dealing with large files – photographers, graphic designers and anyone working with video.

We tested the Elgato Thunderbolt SSD with a 15-inch MacBook Pro with Retina Display.

And these speeds work both ways whether you’re transferring data to or from the Elgato Thunderbolt SSD.

There are no moving parts aboard the Elgato Thunderbolt SSD so there’s no risk of damage when you’re on the move.

The Elgato Thunderbolt SSD’s all metal enclosure is another safeguard to keep your content protected.

The Elgato Thunderbolt SSD will win users over with its speed and portability but that comes at a price.

Unless you need these blistering copying speeds you might be better off with a regular, and much cheaper, portable external hard drive.