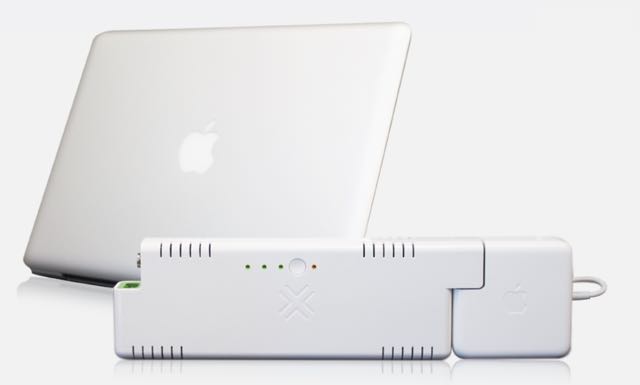 We’ve heard of portable batteries for your smartphone but now there’s one that can keep your MacBook laptop powered on the go. It’s called the ChugPlug.

The product is compatible with the MacBook Air and the 13-inch MacBook Pro and has been designed to work with your existing charger and cables.

ChugPlug can provide up to four hours of extra running time on your MacBook instead of searching for a power point.

The product is handy for anyone who uses their MacBook on the go like a photographer or a writer and whoever is on the move more often than they would be sitting behind a desk in an office.

Weighing less then half a kilo, ChugPlug can easily fit in your laptop bag and has LED indicators to show the remaining charge.

The device is designed to attach to your existing MacBook charger.

To charge the ChugPlug before you head out simply connect the Mac’s cable from the power point but instead of attaching it to the MacBook’s power brick it attaches to back of the ChugPlug.

It takes four hours to completely charge the device.

And when you’re out and about and ready to use the ChugPlug – instead of attaching the cable from the power point to the power brick of your MacBook, simply attach the other end of the ChugPlug.

Now when you attach the magnetic power adaptor to your MacBook it is drawing power from the ChugPlug instead of from the power point.

The ChugPlug will only work with 45W and 60W MacBooks – the MacBook Air and the 13-inch MacBook Pro.

It won’t work with the 15-inch MacBook Pro with Retina Display as it doesn’t provide enough power output.

ChugPlug is available in white to match the existing MacBook charger and cables.

It is available now through Harvey Norman stores and is priced at $199.95.