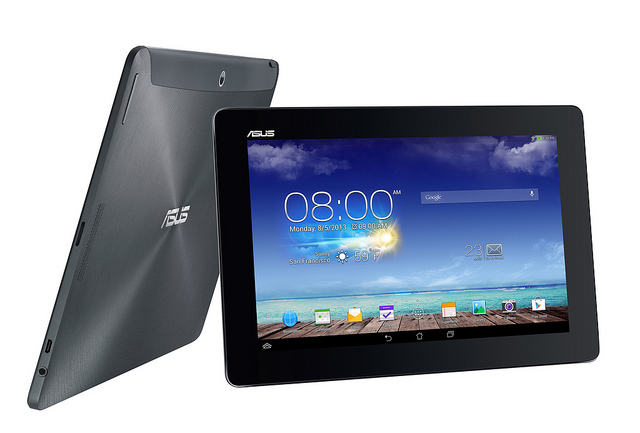 ASUS has introduced its latest Transformer Pad – the device that’s both a tablet and a laptop and large screen smartphone – the ASUS FonePad Note 6.

Unveiled for the first time at the IFA consumer technology tradeshow in Berlin, the Transformer Pad TF701 is a high-quality 10.1-inch Android tablet with a 2560 x 1600 IPS (In-Plane Switching) display that looks good from any angle.

The ASUS FonePad Note 6 is a 6-inch Android smartphone with a full high definition display that’s half smartphone and half tablet – in fact many will call it a phablet.

Powered by the quad core NVIDIA Tegra processor, the ASUS Transformer Pad TF701 is just 8.9mm thick and weighs in at 585g.

It also has Miracast compatibility so users can mirror its display on a compatible high definition TV.

Also onboard is a 1.2-megapixel front camera and a rear 5-megapixel camera which can shoot 1080p full high definition video and capture high resolution images simultaneously.

The dock also includes a USB 3.0 dock and a SD card slot to complement the microSD card slot on the tablet.

The dock also has its own battery to extend the battery life within the Transformer tablet for a combined total of up to 17 hours.

Designed for the user who wants the larger screen of a tablet but the convenience of a smartphone, the ASUS FonePad Note 6 plays in the same category as other recently announced devices like the Samsung Galaxy Note 3 and the Sony Xperia Z Ultra.

It has 10-point capacitive touch for smooth fingertip control along with a stylus that, when ejected, activates the Instant Page app to allow the user to take notes immediately.

The ASUS FonePad Note 6 will be available in black or white and in either a 16GB or 32GB capacity.

The Transformer Pad TF701 and FonePad Note 6 will both be available in Australia in the coming months.