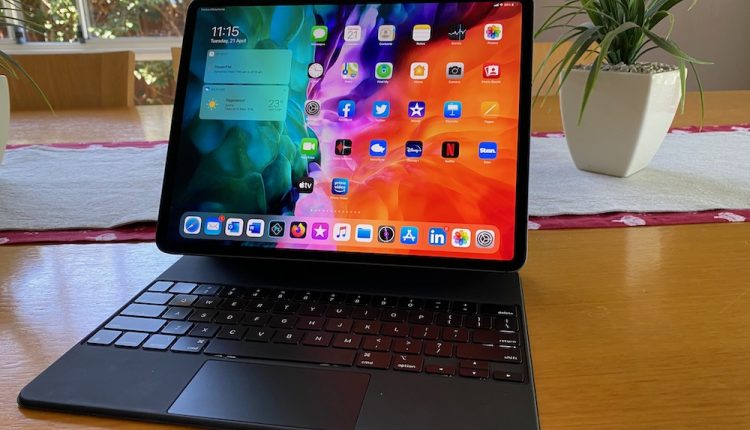 Apple’s Magic Keyboard enhances your experience with the iPad Pro and makes it an even more powerful and productive tool.

It makes the iPad Pro a lot more versatile than it already is  – and it will also work with last year’s iPad Pro as well.

The Magic Keyboard’s track pad and cursor make the iPad Pro more like a laptop than ever before.

The actual keyboard, which is now backlit, uses the same scissor mechanism you’ll find on a MacBook Pro and the MacBook Air and offers the same 1mm travel.

For this review we used the 12.9-inch version.

The Magic Keyboard is a significant accessory that not only has a great design and a full-fledged backlit keyboard and track pad but also has solid hinge and magnets that can support the weight of the iPad Pro and make the device hover above the keys.

Speaking about weight, the Magic Keyboard for the 12.9-inch iPad Pro weighs a tick over 700g – that’s actually heavier than the iPad Pro itself which tips the scales at 643g. 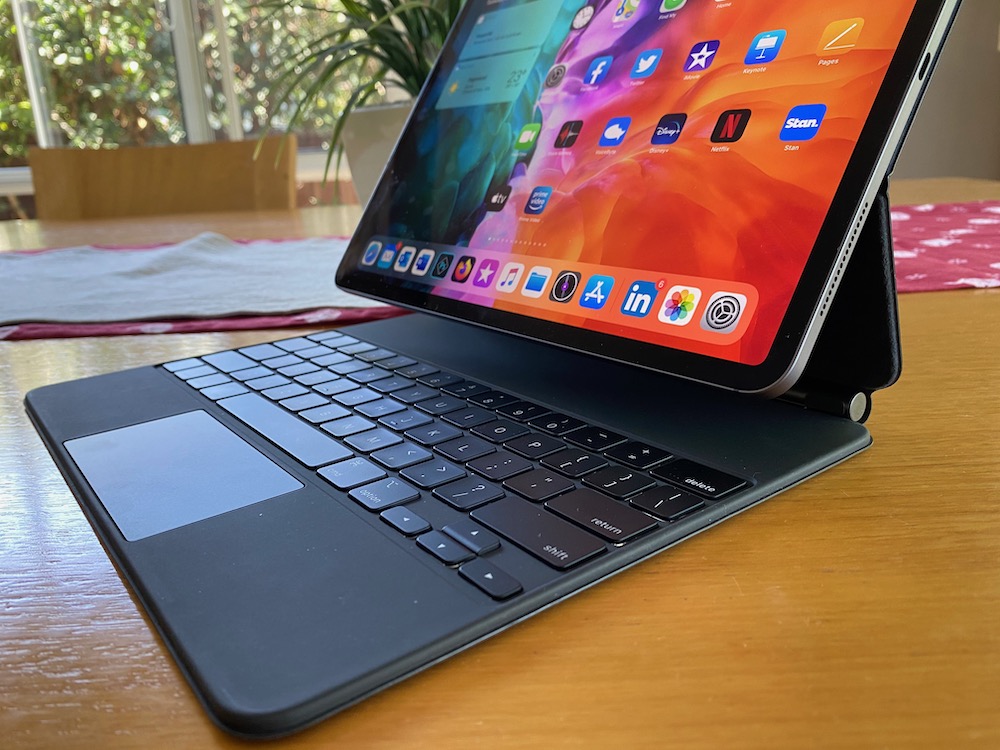 The weight distribution is the opposite of what you’ll find on a regular laptop which is bottom heavy with the circuitry and battery of the computer beneath the keyboard while the screen is thin and light and easy to open with one hand.

With Apple’s new Magic Keyboard and iPad Pro, it’s the opposite with the weight all up top.

This is fine when you’re using the keyboard but it does make it virtually impossible to open with one hand. 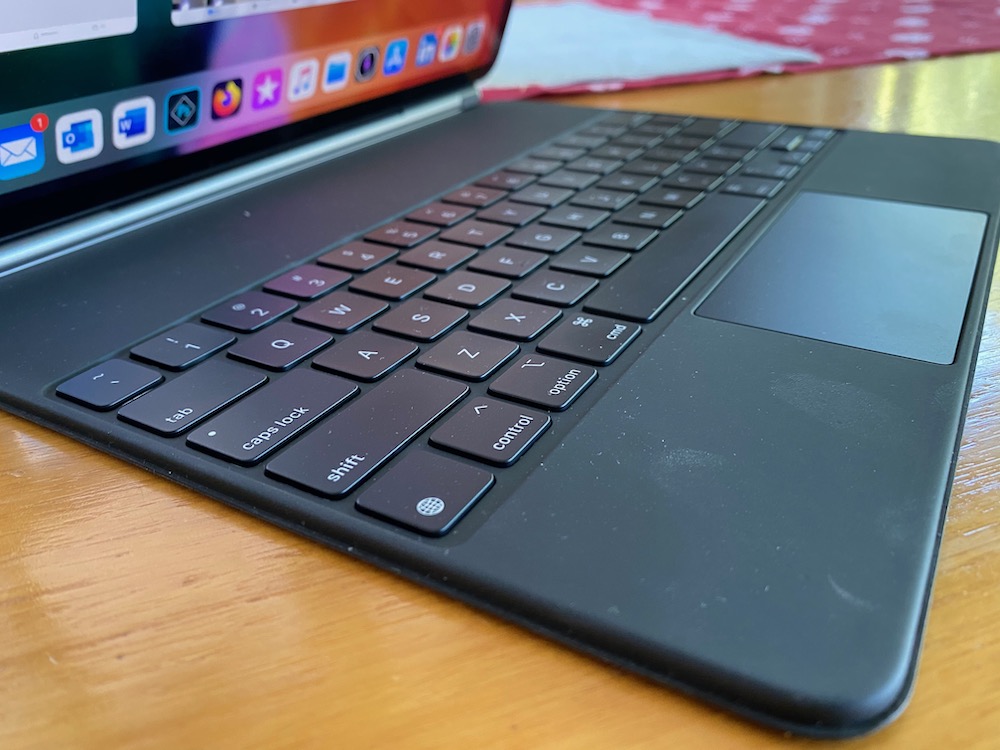 What makes up the main hinge to take the weight of the iPad Pro is metal bar that runs almost the length of the keyboard that also has at one end a USB-C port that can offer passthrough power.

This means the USB-C port on the iPad Pro can be used to connect a monitor, a camera or an external drive.

Typing on the Magic Keyboard is a huge improvement with a similar look and feel to the keyboard of a MacBook Pro or MacBook Air. 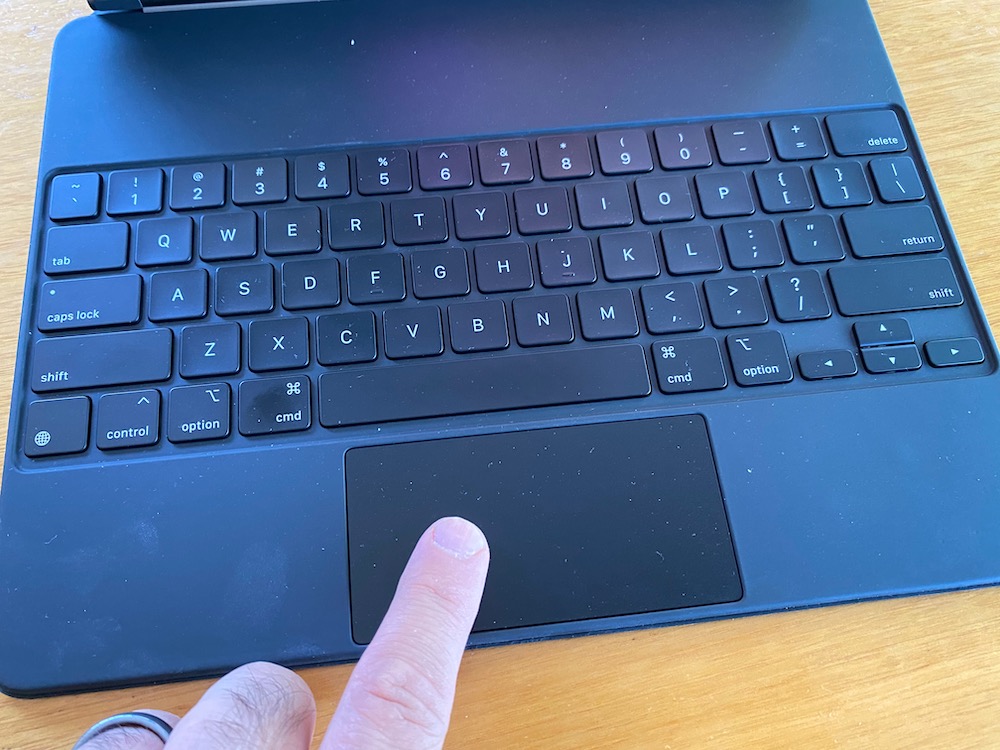 In fact, the Magic Keyboard is almost the same width as the recently released 13-inch MacBook Air.

The keyboard is comfortable and pretty quiet thanks to the same size and shape keys as those on the MacBook.

The iPad Pro hover quite close to the top row of keys and you can also swing the screen out closer to you. 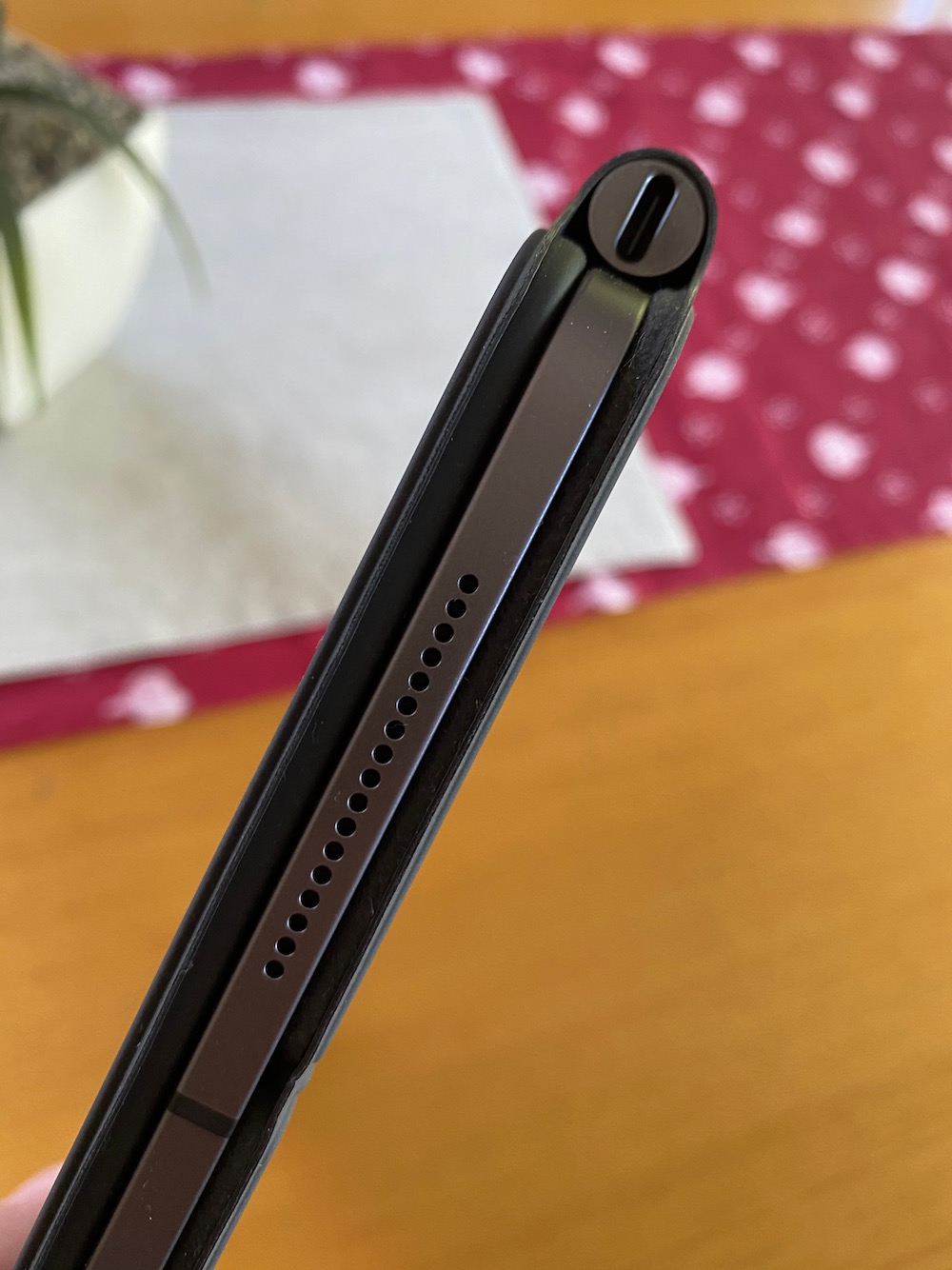 I don’t know whether I’m an overzealous typist (I am typing this on the Magic Keyboard right now) or have a weird style but I found myself hitting the bottom edge of the iPad Pro especially when I was reaching for the number keys in the top row.

This wasn’t an issue after I angled the screen back a little to make more room for my furious typing.

And then there’s the track pad which is a game changer for using the iPad Pro more like a laptop than ever before. 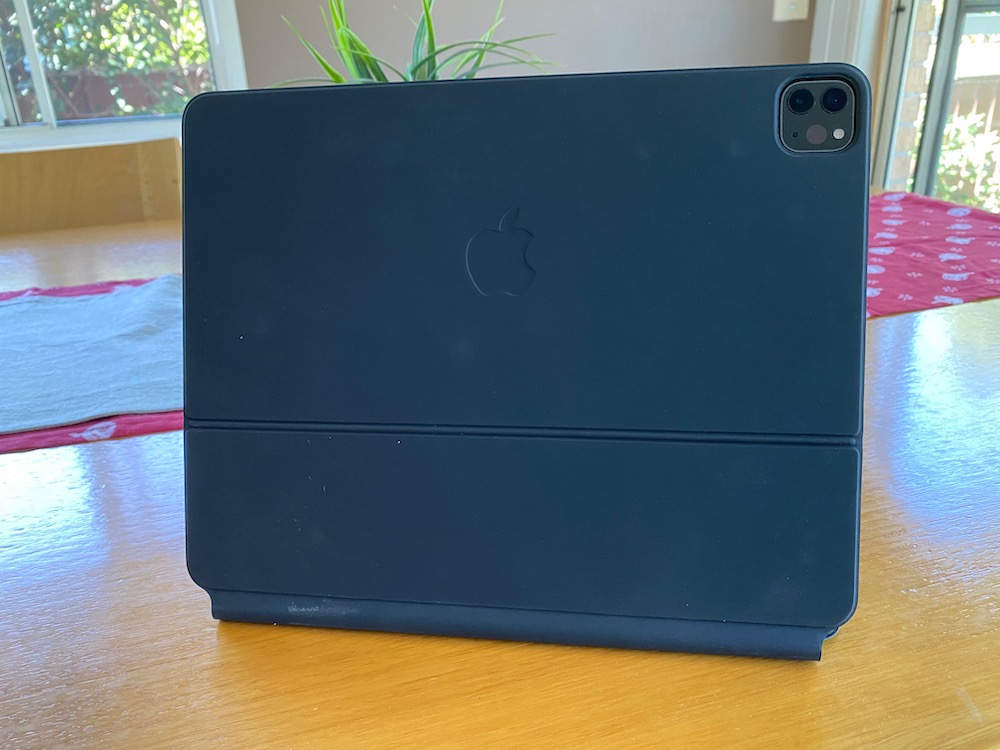 Now there’s a cursor on the screen you can pair a separate Apple Magic Track Pad or Bluetooth mouse even if you don’t have the Magic Keyboard.

The onboard track pad of the Magic Keyboard allows for easy navigation and it is clickable on any part of the surface.

The iPadOS works nicely with the cursor and highlights clickable icons when you hover over them. 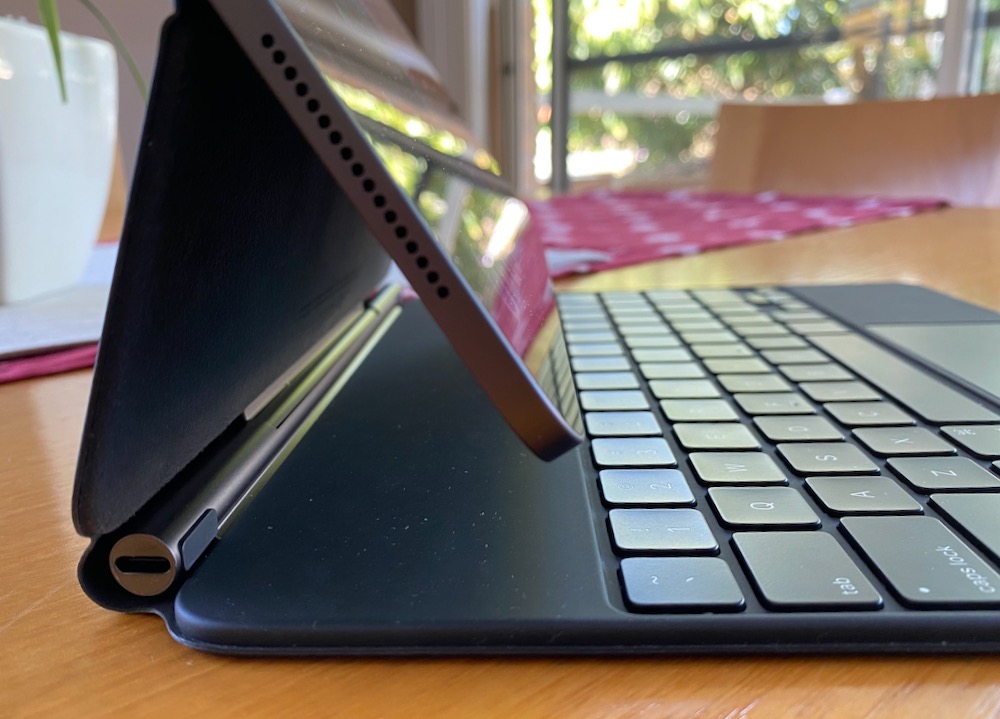 Working with the Magic Keyboard with the iPad Pro is as close to you’ll get to a laptop but there are still a number of differences and not all of the keyboard shortcuts are the same.

But here’s a little something we found if you want to learn the keyboard shortcuts for each particular application.

If you press and hold the command key you can see a list of all the shortcuts that work for that program. 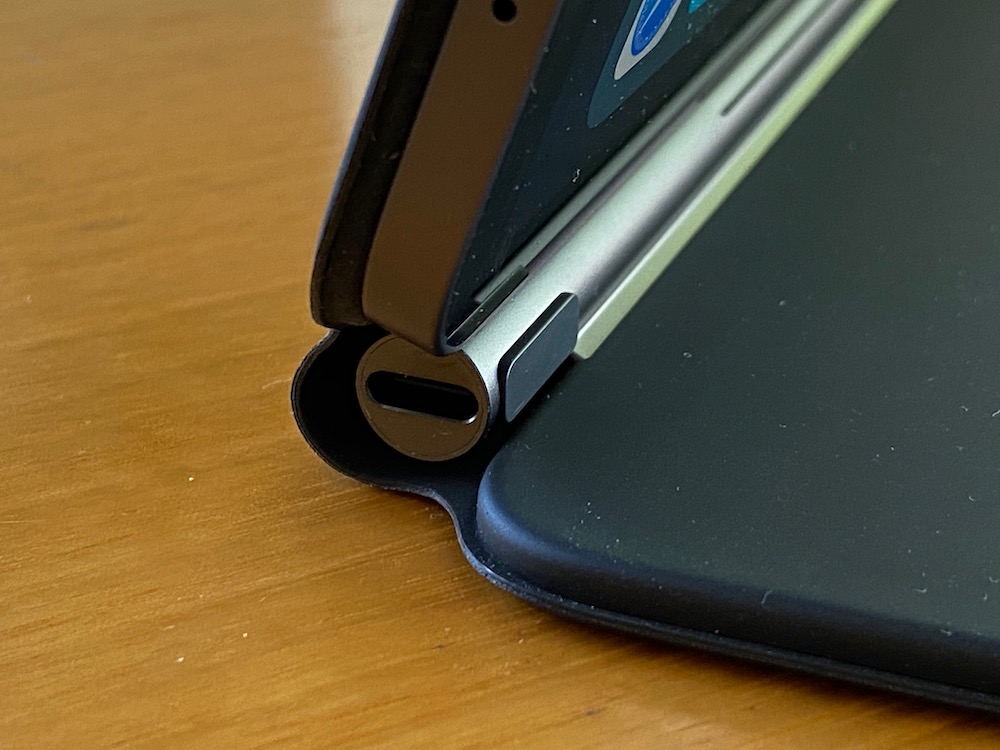 There are still plenty of occasions where you still need to touch the screen which works well because it’s an iPad Pro in front of you after all.

The bottom line is the Magic Keyboard does give the iPad Pro the ability to do almost everything you can do on a laptop.

You’re either a laptop person or a tablet/convertible person so there won’t be many who will be both.

If an iPad Pro user aims to enhance their performance and productivity by buying the Apple Magic Keyboard they will definitely achieve that goal. 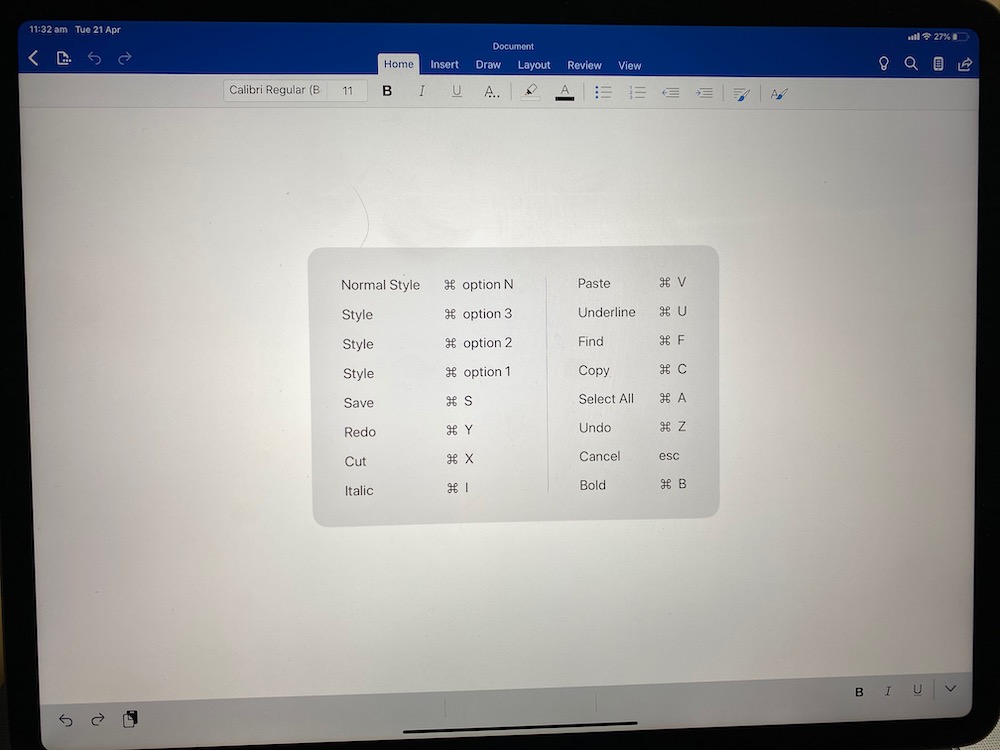 Now let’s talk about the price.

The Apple Magic Keyboard is expensive.

But when you break down exactly what you get – a quality accessory with a great design, that adds a backlit pro-level keyboard and trackpad along with a spare USB-C charge port. 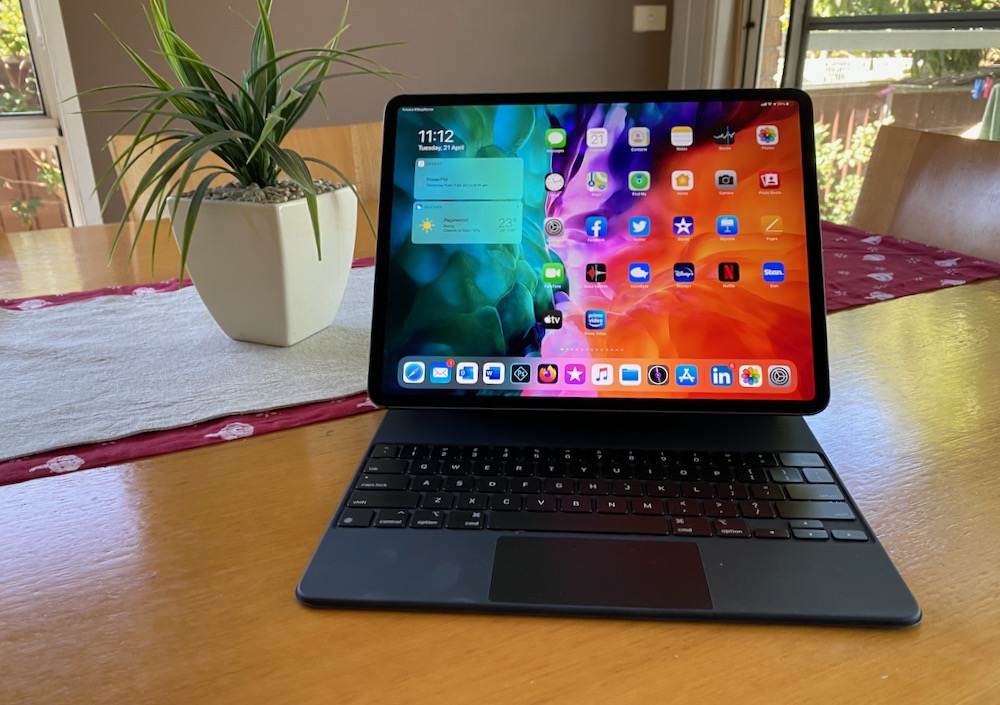 Plus it positions the iPad Pro well floating above the keyboard with some pretty strong magnets.

And it’s also powered by the iPad Pro so you don’t ever have to charge it.

This is without a doubt the best accessory Apple has ever produced and one that takes the product it was designed for to a whole new level.

Apple’s Magic Keyboard enhances your experience with the iPad Pro and makes it an even more powerful and productive tool.

Brighten up your Zoom meetings with some free backgrounds