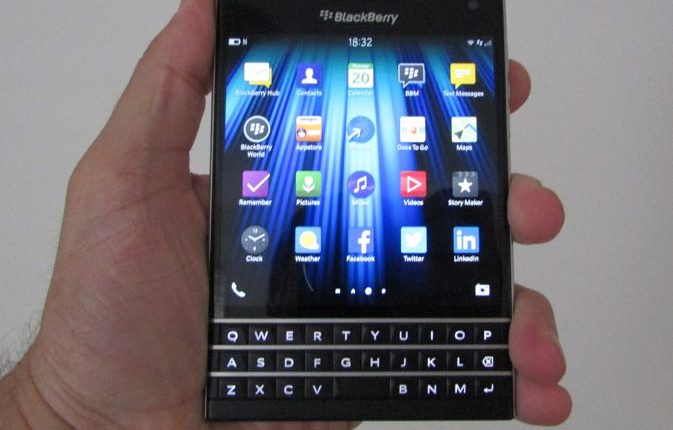 BlackBerry’s main customers today are the ones that stayed loyal or are locked in with a corporate device and the new BlackBerry Passport isn’t going to change that.

The Passport gets its name because it is the same shape as the travel document we carry on overseas trips. It’s also a name that suggests mobility.

But the shape is not what we’ve grown used to in the smartphone market and also nothing like any other BlackBerry that we’ve ever seen before.

It has a 4.5-inch square touchscreen with a 1400 x 1400 resolution and a three row physical keyboard that runs the entire width of the product.

The Passport’s screen is 30 per cent wider than the screen of a regular smartphone so it offers a wider view of websites, maps and other contacts.

It’s also handy for viewing documents on the move – something a corporate mobile user will take advantage of.

The device is 12.8cm long, 9cm wide and 9.3mm thick so if you’ve got small hands you’ll struggle to hold it.

Making calls on the device felt like we were holding a CD case. It certainly took some time to get used to it.

The top portion of the rear panel has a removable door so you can insert a microSD card and the nano SIM card. It also has a 13-megapixel camera.

One of the things that kept users loyal to the BlackBerry brand is the physical qwerty keyboard and the Passport delivers that once again.

It is slightly wider than usual and doesn’t have the usual subtle curve but it’s still quite fast to type with two thumbs. It also has an impressive predictive text system to make your typing even faster.

But the keyboard also has another function – it is also a giant trackpad to navigate your messages and the menus when you don’t want to use the touchscreen.

It also has Voice Control as part of the new BlackBerry Assistant. You can have your emails read out to you, reply back using your voice and set reminders as well.

BlackBerry Blend is a feature that allows you to connect the Passport to computer or tablet over wi-fi so you can view and respond to messages on the larger screen.

And everything you do on your computer or tablet is reflected on the BlackBerry device as well.

After you disconnect there is no remnants left on the device so your messages are still private and secure.

One advantage of having a larger squarer screen is the ability to browse the web in a larger window so the site displays in a way that’s easy to read.

And because it is square, the display can be held sideways and the keyboard’s trackpad capability can be used to scroll the site.

BBM (BlackBerry Messenger) – the direct messaging service that’s now available on other platforms like Android, iOS and Windows Phone is also part of the new Passport so you can share direct messages with end-to-end encryption.

On the app front there are far less options compared to other platforms but all the major offerings are there.

The BlackBerry Passport is a strange looking device that, while boasting a range of useful features, will not be everyone’s cup of tea.

Even the most active enterprise user may find the device too much of a leap away from what they are used to.

BlackBerry was once a dominant brand that kicked off the smartphone movement but since the iPhone and Android changed the landscape, it is hanging on to its shrinking market as best it can.

Retaining and hopefully winning new customers with such a radically different device might be a challenge – even with the most interesting feature onboard.

Mobile Cloth wipes fingerprints and germs from your device’s screen