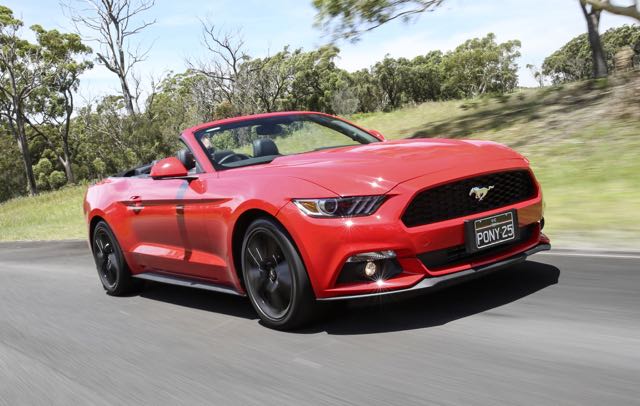 Driving a car like the iconic Ford Mustang certainly turns a lot of heads. And when it’s race red and also a convertible we found out it stands out on the road even more.

In fact, after a lunch I was walking back to the car where it was parked in The Rocks and, as I approached, I saw a woman taking a selfie with the car.

When I unlocked the car with the remote from a distance, she was startled and ran off.

That is just part of the life of being a Mustang owner.

The legendary American pony car has a cool vibe and a certain romance to it which appeals to both men and women. 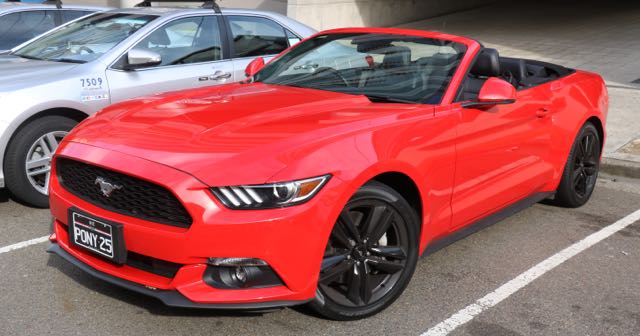 It is a streamlined car with an aggressive stance with that galloping Mustang on the front and back that is instantly recognizable.

The alloy wheels were also black and always looked because you couldn’t see the brake dust.

And while the Mustang certainly ticks the boxes in the looks department, it also has it where it counts under the hood and with the built-in technology. 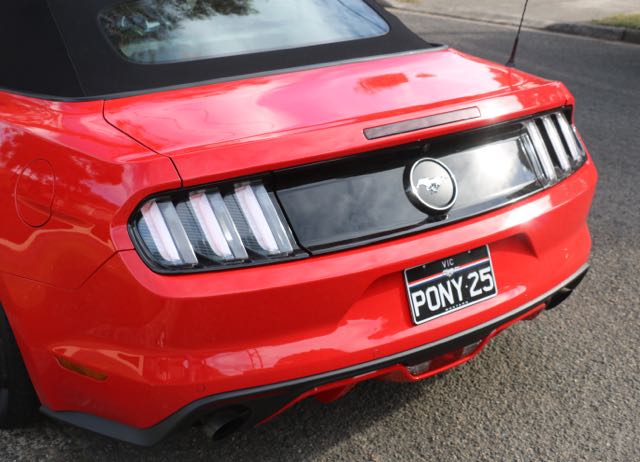 Our convertible 6-speed automatic Mustang had the twin-scroll turbocharged 2.3L EcoBoost engine which delivers 233kW of power and 432Nm of torque.

We drove the Mustang in the city and also in the country and it certainly had plenty of power when we needed it.

It also has a satisfying growl when you start the engine as well as a very pleasing idle. 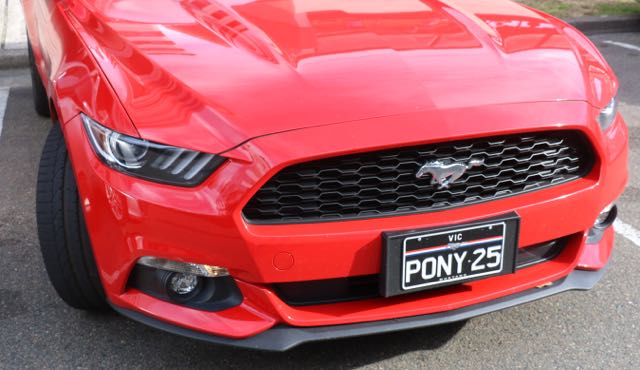 You also get an advanced braking system that prevents the wheels from locking in the event of a sudden stop.

And it handles well too. The sure-footedness is the result of Dynamic Stability Control and the Traction Control System so you can drive with confidence on all sort of road conditions.

We drove the car on highways, country roads and along dirt tracks and the Mustang handled all with ease. 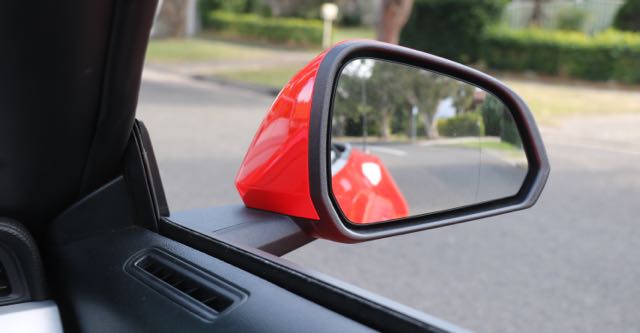 The suspension system, which incorporates a double-ball-joint configuration up front, literally does most of the heavy lifting here.

Inside, the car is nicely finished with more of a masculine finish and with larger switches and buttons

The SelectShift gearstick gives the car the feel of driving a manual and, if you want to change gears on your own, you can do that with the race-car style paddles on the back of the steering wheel. 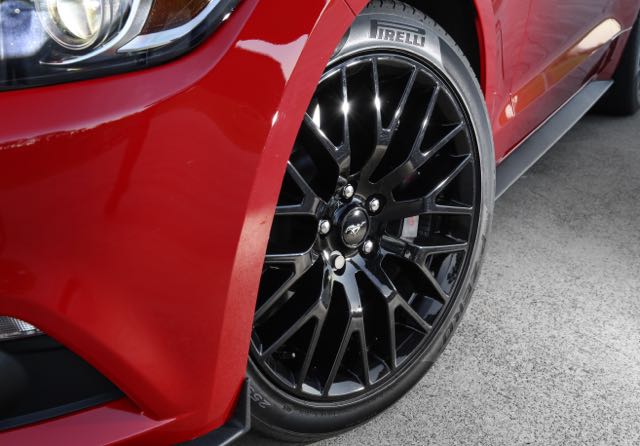 The technology starts with the selectable Drive modes – Normal, Sport+, Track and Snow/Wet and you can even select the type of power steering you want – standard, sport and comfort.

The Sync 3 system looks after your audio, navigation, climate control and the connection to your smartphone.

It’s a touchscreen system that’s easy to navigate but on some screens the buttons were a little small which meant we didn’t get it right with the first press especially while we were driving.

Another downside was the fingerprints on the screen that, when you’re in convertible mode and with sunlight streaming in, makes the screen unreadable by the driver.

There are short cuts on the steering wheel to control your volume and to answer your phone. 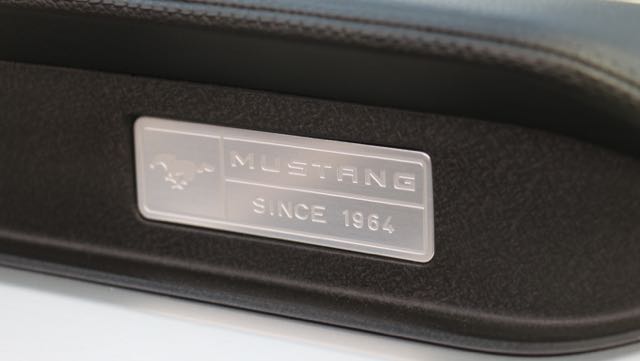 We connected two smartphones to the car – one via Bluetooth and another with a USB cable so we could stream content or listen directly through the cable.

But we did have issues. On two occasions our review vehicle’s speakers wouldn’t work after we started the car.

We tried resetting the system and checking the mute button wasn’t on. Nothing.
We were told to try and disconnecting the battery for minute and technically rebooting the Mustang. This solved the issue. 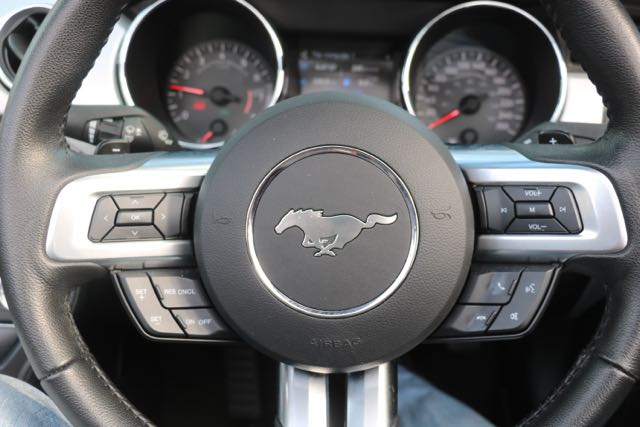 The second time it happened – at least we knew what we had to do. And that meant opening the bonnet, unclipping the plastic cover over the battery and loosening the battery contacts with a spanner.

When the speakers were working, the quality was also impressive with a high level of clarity even when we driving with the top down.

Speaking of convertible driving, we spend most of the time with the roof down despite being the middle of winter.

You can’t retract the roof up or down unless you’ve come to a complete stop – it takes about 10 seconds from the time the roof is manually unlocked and you hold down the button. 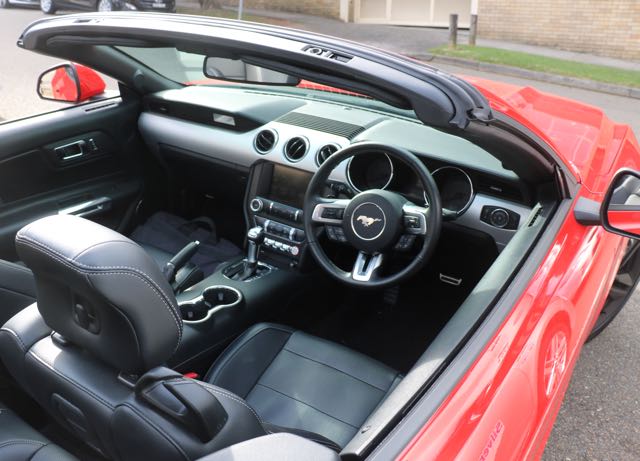 It folds back into a small section behind the rear seats but you then have to clip the plastic inserts on either side to give the car a smoother finish.

Most of the time we didn’t bother with these covers (which have to be stored in the boot) but the car still looked great and it also meant we didn’t have to get out of the car to add or remove the inserts if we wanted to put the roof up for down.

While driving wind swept over the windscreen and left the driver and front seat passengers almost untouched. 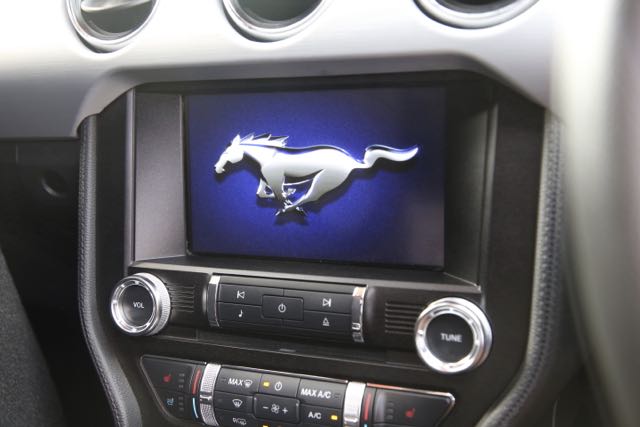 The rear passengers, if they can fit into the really tight back seats, will cop the brunt of the wind.

It’s also pretty noisy as well driving with the top down and that was reduced when the electric windows were up.

But we could still clearly hear our music and all of our phone calls.
There are also some other nice features that will surprise and delight owners.

One is the projection of a mustang on the ground on each side of the car when you unlock it.

The Mustang 2.3L EcoBoost convertible starts at $54,990 plus additional features and like prestige paint and on-road costs.

The Ford Mustang is a fun car to drive and it will certainly attract plenty of looks if you enjoy that kind of attention.

But the vehicle is not for everyone, there is pretty limited space in the back seat and would obviously not suit a driver looking for their next family car.

If you’re after a car that looks great and is a thrill every time you drive it, the Ford Mustang could be just for you.