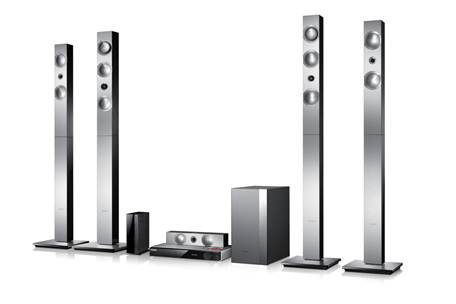 Samsung has taken another significant step forward with its home theatre speaker systems following the introduction of the Series 9 HT-F9750W.

It also has Smart Hub and connectivity that will give you access to content, apps and the web even if you don’t have a smart TV.

The home-theatre-in-a-box offers both quality and value and is made up of two front speakers, two rear speakers, a centre speakers and a subwoofer.

Also included is a pre-amplifier with a built-in 3D Blu-ray Disc player. The pre-amplifier also has vacuum tubes under the hood for a richer, warmer audio output.

You can actually see them glowing through the clear circular panel on the top panel so they are actually a functional decorative feature.

The Samsung 7.1 system’s speakers, which have a combined power of 1,330W, have swivel tweeters which means they can be aimed more accurately towards the viewing position to give users a true surround sound experience.

The rear speakers connect wirelessly to the pre-amplifier via a transmitter that sits in the back of the room so there are no cables to trip over in the main viewing area.

And the audio quality is stunning and has more body and range than you’d expect from an out-of-the-box system.

We watched the latest James Bond film Skyfall on the Samsung Series HT-F9750W and were impressed by the detailed sound from the surround speakers and the authority of the subwoofer.

Together they combined to create a true cinema-like experience that helps to immerse you even further into the action.

And it wasn’t just the conventional surround sound that impressed us. The HT-F9750W can playback 3D movies but also supply 3D sound.

The 3D sound added another layer to the audio which sounded like it was coming to use from above our heads especially during the action scenes.

And the system also brings with it all the smarts you’d expect from a smart TV so it can turn your existing TV into a connected device that will be able to access all kinds of content, catch-up services, apps and browse the web.

The system is let down a little by the remote control which could have been bigger and with a better key layout.

Navigating the Smart Hub was a little clumsy with the directional keys and browsing the web was also a chore.

But that’s hardly a deal breaker when it comes to the value and experience users will enjoy when they are surrounded by Samsung’s Series 9 HT-F9750W home theatre system.

If you’re looking to create a high-quality cinema experience at home then the HT-F9750W easily fits the bills.

It certainly punches above its weight with an audio quality that will be hard to believe it’s coming from a complete system that costs less than $1500.