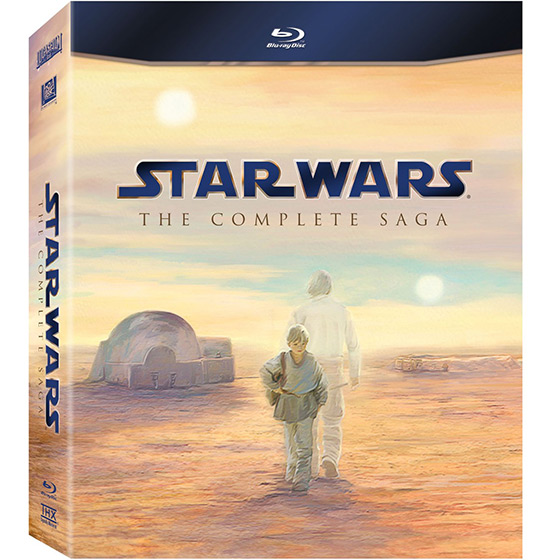 The Star Wars films have all been released on Blu-ray and there’s no denying they look amazing and sound incredible.

For true fans who’ve watching these films for years, viewing them in full high definition was almost like seeing them again for the first time.

But we couldn’t review these iconic films without mentioning the changes which have once again been made.

The versions of the original trilogy Episode IV, V and Vi in this exciting Blu-ray box set are the Special Editions of the films released in 1997 and have also inherited all the changes which were made in the DVD release in 2003.

There have been even more changes made to the versions included in this Blu-ray edition. Some of the changes make the movies better, some do nothing to improve the films and a couple make them worse.

The original trilogy – Star Wars (A New Hope), The Empire Strikes Back and Return of the Jedi – are all still landmark films but, with the changes, feel like a home we’ve lived in all our lives that have undergone some renovations.

Creator George Lucas has taken every opportunity to fine tune and tweak the films. His original film – released as Star Wars in 1977 and renamed Episode IV : A New Hope in 1981 – has undergone the most updates and changes.

To many these alterations are like painting a moustache on the Mona Lisa.

The prequel trilogy – Episodes I, II and III – being more recent, have undergone hardly any changes and, because of their digital production within the last 12 years, look incredible on Blu-ray.

What hasn’t been improved on the prequels are some of the flatly delivered lines and cheesy dialogue but they are still enjoyable to watch in high definition on Blu-ray.

This is the first time all six of the Star Wars movies were available together for the first time. We decided to watch them from Episode I to IV and many of the events of the prequels slightly changed the way we viewed the original trilogy now that we knew the path the characters had taken.

Obviously some of the biggest revelation of the films – “I am your father” and Yoda’s introduction on Dagobah, both from Episode V: The Empire Strikes Back – lose their punch when watched in this order for a first time viewer.

I’d suggest anyone watching these films for the first time should watch them in the order they were made – Episode IV, V and VI and then Episodes I, II and III. This way those tent pole moments we just mentioned will maintain their impact before going back to where it all began.

Here’s a look at each of the Star Wars films on Blu-ray:

Episode I: The Phantom Menace

From the opening frames the picture quality is eye popping and the 6.1 channel sound track aggressively spreads the workload to all of the speakers in your surround sound system with particular attention paid to the subwoofer for all of those delightful rumbles of engines, laser blasts and explosions.

Love him or hate him, Jar Jar Binks looks more detailed than ever and the texture of his virtual skin is clearly visible. Unfortunately his voice is still annoyingly clear.

Yoda, originally filmed as a puppet for Episode I, is now completely CGI like he is in Episodes II and III. This is a change we applauded because it not only gave Yoda consistency in the prequels – we weren’t a big fan of the puppet because it looked nothing like the Yoda we knew from the original trilogy.

Whether it’s the rich, colourful Naboo to the bright, arid Tatooine and the gleaming megatropolis of Coruscant – there is more detail and background activity than ever to enjoy.

The highlights of the film in terms of head-turning visuals and rich, authoritative audio are without a doubt the Tatooine podrace and the final battle on and above Naboo.

Episode II: Attack of the Clones

This was a digital production from start to finish so it’s no wonder the high definition transfer looks fantastic.

The wide variety of sounds are also showcased nicely on this Blu-ray whether it’s a speeder above the skyscrapers of Coruscant or the battle on the plains of Geonosis.

Referred to by George Lucas as the love story of the prequel trilogy, Attack of the Clones has plenty of action and battle sequences but Anakins’s painful scenes where he’s professing his love to Padme are still hardly bearable.

The battle within the Geonosis and the opening salvos of the Clone Wars rock your speakers pretty heavily and sends the subwoofer into overdrive.

Episode III: Revenge of the Sith

The darkest and best of the prequel films, Revenge of the Sith is a jaw dropper in both sound and vision from the opening scenes.

The vastly different environments and wide-range of characters populate this colourful film well with textures and detail that can truly be appreciated in full high definition on Blu-ray.

Again the audio has real punch and the visuals are so sharp they should carry around band-aids for safety.

Watch out for the opening space battle above Coruscant, our first and only glimpse of the wookie planet Kashyyyk, the sinkholes of Utapau and lava planet of Mustafar where the climactic confrontation between Obi-Wan and Anakin – the master the headstrong pupil – takes place.

Darth Vader’s appearance for the first time near the end of the film can really be appreciated in full high definition on Blu-ray.

Seeing the iconic black suit and knowing who was inside and how he got there set a different a slightly different tone for the original trilogy films that unfold in the Star Wars timeline.

This is the original and best of the films on Blu-ray. Despite being the oldest film it looks like it was made last year.

The high definition restoration – which has been sitting on a shelf at Lucasfilm since the DVD release in 2003 – needs to be seen to be believed.

This is a film we’ve watched countless times and right from the opening scenes were marvelling at the detail that was lost even on DVD.

We didn’t realise there were so many scratches and markings on C3P0 and R2D2 and the streets of Tatooine have never looked so vibrant as they are on Blu-ray.

This film has undergone many changes over the years as it has been re-released in cinemas and for each new video format.

There are even more for the Blu-ray.

One of the biggest changes is the “Krayyt Dragon” cry from Obi-Wan Kenobi to scare off the Tusken Raiders who have just attacked Luke Skywalker. This adds nothing and is a change made for the sake of it. We liked it the way it was.

This scene has also been digitally altered with the hiding R2D2 now partially covered by some virtual rocks. Completely unnecessary and adds nothing to the movie.

It’s puzzling to work out why George Lucas goes to the trouble of making changes which to many appear random while leaving some other shots where characters and vehicles clearly appear to be placed on a backdrop or matte painting.

Nonetheless the film still retains its character and seeing Tatooine, the Death Star and the climactic final Death Star attack in high definition were clearer than we can ever remember them.

This is also probably the best sounding film in the box set even though, ironically, it is the oldest of the series.

A lot of work went into the audio quality of this film with sound engineers going back to the original set recordings for dialogue while the soundtrack was enhanced to match the 6.1 channel soundtrack of the prequels.

The result is a feast for the eyes and ears.

Episode V: The Empire Strikes Back

This is considered by many fans to be the best Star Wars film of the series and that love will only improve when viewing it in full high definition on Blu-ray.

The ice planet of Hoth from the opening scenes really popped in our high definition screen.

The iconic AT-AT Walker surface attack sequence looked better than ever before and, again, the audio delivers through every speaker.

With the clearer images Blu-ray provides, the sequence with the Millennium Falcon weaving in and out of the asteroid field is a lot clearer with far more definition of the background asteroid belt and the ships as well.

The dark scene where the Falcon is hiding in what it thinks is a cave inside an Asteroid is also a lot more detailed in HD.

In terms of audio quality the scene where Luke Skywalker confronts Vader and eventually discovers his heritage is so rich with sound and atmosphere it’s worth repeating the scenes on the spot and watching them all over again.

Empire Strikes Back has been relatively untouched without any major changes.

Yoda is still a puppet but the performance and realism holds up to this day. No replacing this one with a CGI version.

One change we’re still not comfortable with and is still present on the Blu-ray edition is the Kiwi accent that been given to deadly bounty hunter Boba Fett.

This occurred back on the DVD release which was released during the production of the prequels which saw New Zealand actor Temuera Morrison play Boba Fett’s father Jango.

It’s unfortunate the prequels have forced George Lucas to make changes to the original trilogy. It should have been the other way around with the original films providing the template for the prequels.

Episode VI: Return of the Jedi

There were so many things we picked up in Return if the Jedi watching it on Blu-ray despite watching it for years on VHS and later on DVD.

And it’s apparent from the start of the film which takes place in the dark passages of Jabba The Hutt’s palace.

The improved black levels and the detail within the darker areas of the screen revealed objects, characters and backdrops we hadn’t noticed before.

There are some changes made to this film as well. One of the biggest changes has been made to the Ewoks. Now their previously lifeless eyes now blink.

We liked this change as it gave the Ewoks more emotion and made them more lifelike.

But perhaps the most talked about change is the audio change made to the climactic scene with the Emporer attacking Luke Skywalker after refusing to the turn to the dark side as Darth Vader looks on.

In this Blu-ray version Vader now shouts “Noooo” as he picks up the Emperor and throws him to his death. He actually says “no” twice. Once before he makes his move and then again louder when he makes his move.

Many fans, and with good reason, have been against this addition.

We actually don’t mind it because it give it symmetry with the “Noooo” from Episode III when he was lamenting this loss of his wife. This time around the “Noooo” was Vader taking back control and saving his son.

Thanks to the full high definition transfer we noticed, for the first time, the tears streaming down Luke’s face in the medium shot where he has just removed his father Darth Vader’s helmet and watches him die.

This is a must have collection for any Star Wars fan who wants to enjoy them in the highest quality.

First time viewers will enjoy the video and audio quality as well as the amazing story which spans generations.

For die-hard Star Wars fans, like us, who have been watching these films for years it is a chance to pick up things we haven’t noticed before.

The changes are not too grating and thankfully the spirit of the films have been maintained.

How to protect your identity from cyber criminals