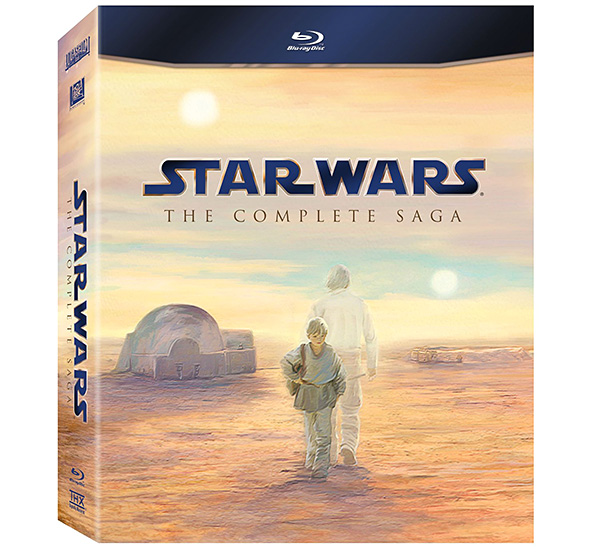 The Star Wars films have just been released on Blu-ray Disc in different sets that include the original and prequel trilogies and one that features the complete saga.

Now if it’s special features and extras you’re after, then the only choice is the complete saga box set which contains nine discs.

Three of these discs are packed with more than 40 hours of deleted scenes, interviews, behind-the-scenes docos and concept drawings. We took a look at them.

Lucasfilm has done an amazing job assembling these extra features which span more than 35 years of Star Wars film production.

The discs are divided into the prequel trilogy, the original trilogy and a collection of documentaries and spoofs.

And the good news is that, even for the more recently released prequel trilogy, there are no features on the Blu-ray set that we’ve seen before.

This Blu-ray set presents the films in full high definition but also a host of rare and some never-before-seen extras that for die-hard Star Wars are worth the price of the box set alone.

The features are arranged movie by movie and location by location.

For example the extras for Episode IV: A New Hope are split into Tatooine, Aboard The Death Star and The Battle of Yavin. And each of these is divided into deleted scenes, overview, interviews, props and concept art.

The deleted and alternate scenes which really got our attention were the ones which were left out of the original trilogy.

In Episode IV (A New Hope) we see Luke Skywalker hanging out with his friends at Tosche Station (where he whined in the film was the place he wanted to pick up some power converters) and runs into his friend Biggs who has just returned from the Academy.

A scene cut from the start of the film shows Luke Skywalker gazing skyward with binoculars at the Imperial Star Destroyer in orbit above the planet which would have been intercut into the famous opening scene where Princess Leia’s blockade runner ship is overtaken.

There’s also a rough cut of the Cantina sequence that shows the menagerie of characters shot in black and white and all speaking with English accents. Part of this sequence shows the infamous confrontation with Han Solo and Greedo and the good news is that in this version – Han still shoots first.

One of the best deleted scenes is from Episode V: The Empire Strikes Back which shows the Wampa creatures invading the Rebel’s base on the ice planet Hoth.

It was easy to see why this scene was left out of the finished film but enjoyable to view nonetheless and see where it would have fit into the story.

Return of the Jedi’s standout deleted scene shows Luke Skywalker putting the finishing touches to his light sabre before setting off to rescue Han Solo from Jabba the Hutt’s palace.

From the prequels the deleted and extended scenes are mainly animatics to give the viewer the idea of the scene.

The DVD versions of the prequels actually have a better collection of deleted scenes which were fully completed for the DVD release.

There is a fascinating collection of interviews taken from the time of production and some recently shot retrospectives.

These interviews are with George Lucas, the cast and crew with many more from special effects wizards Dennis Muren and Phil Tippett.

These segments are presented as part of the overviews of each location of the film.

It is hard to believe that one of the earliest designs for Yoda pictured him to look more like a midget Santa Claus than the lovable green creature we know and love.

The vast collection of concept paintings and drawings present an interesting insight into the design process that went onto each film.

Another great example from the original Star Wars film was the design of the Millennium Falcon which was original long and narrow.

This design was later handed off to become the Blockade Runner seen in the first shot of the original film.

Another fact which emerged was that the original Falcon design was too close to the Eagle spacecraft in the Space 1999 series which was on air during the Star Wars pre-production period.

After this setback George Lucas’s advice to the designers and models makers for the Millennium Falcon was “make it look more like a hamburger”.

This is an excellent part of the extra features because it gives fans a view of all the significant props, costumes and matte paintings used in all six films.

Viewers can then choose between detailed close-up views of the various aspects of the item or a 360 degree look.

Included with may of the objects are short video commentaries which describe the story behind the piece, the work that went into creating it and the way it fit into the story or scene.

The third bonus disc has out together for the first time the collection of making of videos from the original trilogy of films.

There’s also a 90-minute collection of Star Wars spoofs and parodies created over the last 30 years and include clips from The Simpsons, Family Guy and other TV shows and films.

The extra features on the The Complete Star Wars Saga Blu-ray box set will provide literally hours of enjoyment for true fans.

They will take viewers behind the scenes and give them a real appreciation for the skills and passion that went into making the movies and remind them all over again why they like Star Wars so much.

For die-hard Star Wars this collection of extras is worth the price of the box set alone.