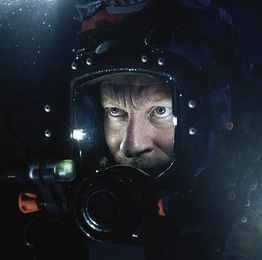 If you’re claustrophobic or aquaphobic (that’s a fear of drowning) then DO NOT watch the James Cameron-produced film Sanctum.

Based on a true story, Sanctum tells the story about a group of cave divers who explore the world’s largest unexplored cave system in the world.

When a severe tropical storm floods the caves the only way out is down – through the as yet undiscovered passage to the sea.

Sanctum was released in 3D in cinemas and has just been released on Blu-ray in both 3D and 2D versions as well as on 2D on DVD.

James Cameron’s involvement began years ago when Andrew Wight – Cameron’s friend and fellow diving enthusiast – was trapped in a cave on the Nullabor Plains for two days before being rescued.

Cameron thought the incident would make a good film and Wight came on as co-writer and the result was Sanctum.

The film does well to capture the dangers and exhilaration that goes hand in hand with cave diving.

The tension between Josh (Wakefield) and his cave-diving obsessed father Frank (Roxburgh) – at times a little overdone – adds another layer of difficulty to the  many obstacles that stand between the divers and safety.

The first major obstacle is the massive tropical storm which turns the cave system into a “blocked dunny”.

From here it’s a matter of survival – squeezing through tight spaces and sharing oxygen masks to make it to the other side.

But it’s also about surviving each other as the desperate divers fear they will never see daylight again.

The Blu-ray edition of Sanctum has deleted scenes and a fascinating behind–the-scenes documentary that shows how the real-life incident inspired the story and how they brought this difficult production to the screen.