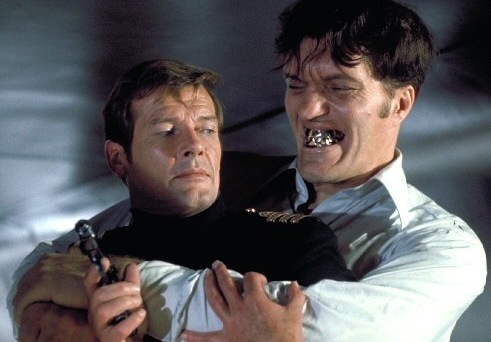 It’s been 50 years since the first Bond film hit the big screen and to celebrate 20th Century Fox has today released Bond 50 – a collector’s Blu-ray Disc box set with all 22-films digitally remastered.

Bond 50 brings the entire James Bond collection – from Dr No to Quantum of Solace – together for the first time in full high definition on Blu-ray Disc.

The box set is beautifully presented in what looks like two books with two films presented on each page with glossy images from each corresponding movie.

There is also a placeholder for the latest Bond film Skyfall when it is available on Blu-ray Disc in 2013.

Also included is a bonus disc with more than 120 hours of extra features including interviews, behind the scenes features and other documentaries.

To celebrate the box set’s release, Tech Guide was given the chance to speak to one of the Bond series most iconic villains – the metal-mouthed Jaws played by 2.17m tall actor Richard Keil.

The Jaws character, complete with his shiny, yet deadly metallic smile, was first seen in The Spy Who Loved Me and was so popular he was recalled for another Bond adventure Moonraker.

In fact Jaws is the only villain played by the same actor to feature in two Bond films.

Keil, who had already made a name for himself in Hollywood talks about how he first entered the world of James Bond, his friendship with Roger Moore and how he was nearly cast in Star Wars.

Here’s Tech Guide’s one on one interview:

TG: How did you come to be offered the role as Jaws?

I was working on a film called the Silver Streak at 20th Century Fox and my agent called and he said Cubby Broccoli wanted to have lunch with me tomorrow but I didn’t know who that was. I knew the Bond films but I didn’t know the name of the producer. The next day I met with him for lunch at the Polo Lounge at the Beverly Hills Hotel. He told me about the part and I had some ideas on how I’d like to play it. He liked my ideas a lot and asked if I could join him and his wife and family and the writer for dinner that night at his house. So I did and the next thing I knew I was on a plane heading for London.

TG: The character of Jaws has an unmistakable set of metallic teeth. How did they manage that look?

They had a dental technician to make special teeth to go over my own teeth. They were made out of chromium steel – the kind of stuff they’d make braces out of and they used a ton of it. In fact the dental technician had trouble forging that amount of chromium steel. They wanted to make half a dozen sets but he said he could only do one set – that was it. So every night it went into a safe.

TG: What was it like wearing the metal teeth on the set? Were they uncomfortable?

They were like a boxer’s mouthpiece and the fact they went right up into the roof of your mouth, they were quite gagging and really made you nauseous. Sometimes I felt like I was throwing up so they could only stay in for a minute or two at the most. There was a lady with a Tupperware container who I would hand them to so she could rinse them off with mouthwash and be ready to go for the next take.

TG: Jaws proved to be very popular – they asked you back for another Bond film.

It was so popular. I got a lot of fan mail and people wanted to see more of Jaws. I wasn’t totally surprised because they shot an alternate ending (for Spy Who Loved Me) where I kill a shark. I saw the film at screening at MGM Studios and they stuck me in the back so nobody knew I was there – when Jaws popped out of the water and survived the audience screamed and cheered. I thought, my goodness, I’ve made it big in a movie.

TG: Being such an iconic and popular role, were you worried it was something you’d always be associated with?

I have been very fortunate. I’ve made a great variety of films so I haven’t been pigeon holed as Jaws at all. I was offered the Austin Powers movie to play a similar character to Jaws. If you don’t want to be typecast then you need to be able to say no and I did.

TG: What was it like working with the Bond on those films – Roger Moore?

Roger was a sweetheart. He was a guy who had a bigger heart than ego. He saw that Jaws was going to be very entertaining and maybe steal some scenes but he didn’t care – he liked the fact that Jaws was entertaining and he pointed to it which made it even better. I love the way Roger Moore’s sense of humour came through.

TG: We understand you were offered the role of Darth Vader in Star Wars – is that true?

No, I was offered the role of Chewbacca. It (Star Wars) was a low budget film at the time and they only wanted to pay scale. From the first job I had in the movie industry I always made much more than scale. I need more – my clothes are more, I’ve got bigger cars, bigger bed so I didn’t want to start going backwards. But I looked at the storyboards for Star Wars and I knew it was going to be a huge hit. They said George (Lucas) has a tendency to pay points (a percentage of the profits) so if I knew I was going to get points and if the thing is the success I think it will be, I’d be happy to do it for scale and a percentage of the profits. But they said we can’t guarantee it and I said if you can’t guarantee it then I can’t do it. No one else – the guy who played Darth Vader and the man who played Chewbacca – to my knowledge ever got a percentage of the profits.

Bond 50: The Complete Blu-ray Collection – all 22 Bond films available together for the first time on high-definition Blu-ray. Includes all-new bonus disc and over 120 hours of extras. Out now.