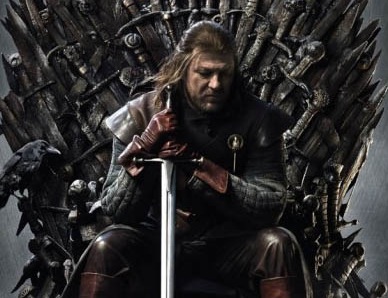 It’s been described as The Sopranos with swords – the epic first season of Game of Thrones has just been released on DVD and Blu-ray Disc.

Based on George R R Martin’s popular Song of Ice and Fire book series, Game of Thrones has been meticulously and faithfully adapted to the screen drawing together the numerous characters and the complex relationships that exist between them.

Each family – or House – is located in one of the seven kingdoms of Westeros – the medieval location of the Game of Thrones universe.

Eddard Stark (Sean Bean), ruler of Winterfell in the north is asked by King Robert Baratheon (Mark Addy) of Kings Landing to serve as the Hand of the King after the suspicious death of the previous Hand Jon Arryn.

Baratheon and Stark are like brothers with Baratheon still mourning the loss of Stark’s sister Lyanna whom he loved deeply.

Now married to the Cersei Lannister, Baratheon still desires to link the Stark and Baratheon houses with a match between Stark’s eldest daughter Sansa and Prince Joffrey Baratheon.

Meanwhile, across the Narrow Sea, Daenerys Targaryen is offered by her brother Viserys the Third as a bride to Khal Drogo, leader of the warrior Dothraki clan.

Viserys the Third longs to reclaim the Iron Throne with the help of the powerful Dothraki after his father, also known as the Mad King, was murdered.

And so begins this excellent series.

Readers of the popular book series will have enough background and learn much of the characters complex back stories in those pages.

Those approaching the series without having read the first of the Song of Ice and Fire Novels – Game of Thrones – may struggle to keep track of the highly populated world and not see the many connections between the various Houses and the relationships, treachery, incest and betrayals that exist between them.

To help these viewers the Game of Thrones Season One box set includes a detailed episode guide and an interactive compendium to learn more about each House and characters within them.

Each episode can also be played with an in-feature resource to easily access background information about each onscreen character and location along with all the relevant histories.

Included in the set is a fold out map of Westeros along with family trees for Houses Stark, Lannister, Baratheon, Arryn and Targaryen.

A note to viewers watching Game of Thrones for the first time – it is R-Rated for a reason – there is lots of swordplay and violence not to mention a fair amount of nudity so best keep this one away from the kids.

With Season Two going to air in the US in April, the release of Game of Thrones Season One couldn’t have been timed better.

Fans of the show can recap the event of Westeros before sinking their teeth into Season Two.

The set also give those new to the show a chance to see what all the fuss is about and lose themselves in this fascinating world filled with characters you can’t take your eyes off.

Game of Thrones Season One