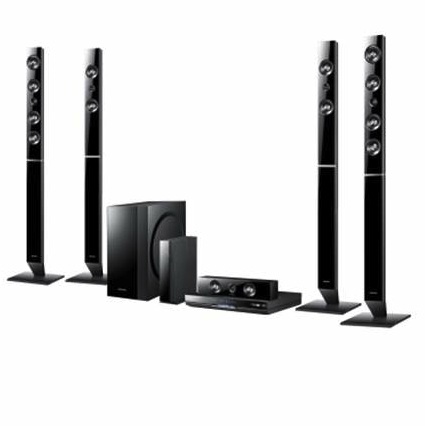 If you’ve got a  flatscreen TV and want to add a home theatre speaker system, an all-in-one solution is a popular choice.

Samsung’s new HT-DT6750W Series 6 home entertainment system will not only surround you with speakers, it will also provide 3D video from the included Blu-ray Disc player.

And on top of the 7.1 channel surround sound the Samsung system also introduces 3D Depth Sound which brings in audio horizontally and vertically.

All you need to add to the Samsung HT-DT6750W is a 3D television to enjoy everything it has to offer.

The system comes in a pretty big box but don’t let that phase you.

It is surprisingly easy to set up with clear instructions and colour coded inputs and matching cables to make sure everything’s all plugged in the right way.

Once you’ve snapped them together, the main four speakers – front left and right and rear left and right stand 1.3m tall. They are all slim and smartly styled.

The rear speakers connect wirelessly to the receiver via small wi-fi module that sits at the back of the room. So there’s no cable that runs from the front of the room to the back and therefore nothing to trip over.

Also included is a centre speaker which is placed directly under the screen so the actors voices appear to be coming from the television.

To complete the speaker set there’s the 6.5-inch subwoofer with 10-inch radiator to add that extra thumping bass to the soundtrack.

The 3D Blu-ray player also doubles as the receiver so there’s no need to worry about overcrowding your entertainment unit or needing a larger one.

The unit itself has a slot loading Blu-ray player along with touch sensitive controls.

A small wi-fi receiver that looks like an oversized memory card slots into the rear panel of the player/receiver and provides wireless connectivity to not only the rear speakers but also to your home network.

Another exciting new feature to be enjoyed with the Samsung system is the Smart Hub which was introduced earlier this year on the company’s range of Smart TVs.

And with the wi-fi connectivity of the system there’s no need to connect the system to your broadband connection with a cable.

On the 3D side the system can play 3D Blu-ray discs on your 3D panel. Users can even use the system to convert 2D content to 3D as well.

But how does it sound?

The answer is excellent. The level of audio that comes out of these relatively small speakers is impressive and at the level you’d expect to hear from larger and more expensive speakers.

We were pleased with the level of detail the system provided whether it was the tinkling of glass, the sudden report of a gun or an explosion.

Voices were loud and clear from the centre speaker while the subwoofer was adequate but could have offered a little more authority.

Another surprise was the 3D sound. With views of Avatar, Pirates of the Caribbean 3 and Harry Potter films on Blu-ray the soundscape had it usual horizontal direction but was also joined by sounds that, to our ears, were dropping down to use and hovering above our heads.

Even as a music player the Samsung system has it where it counts. It comes with a iPod dock so users can enjoy their music right off the device and even control it with the included remote control.

And being backwards compatible it can not only handle Blu-ray Discs but also DVD and audio CDs as well.

With the addition of 3D playback and 3D sound the system is a real standout and suitable to those who want to create an enjoyable home theatre experience without breaking the bank.

Come on, get Happy with new Acer Aspire netbook