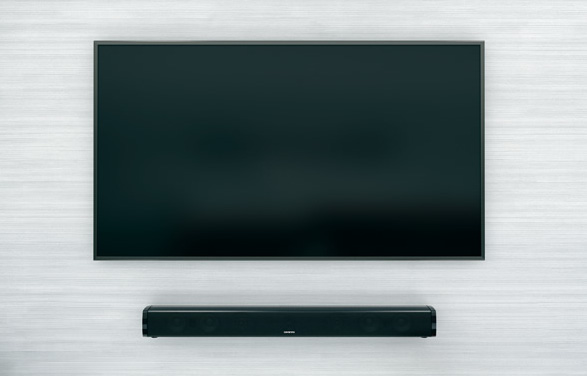 Onkyo knows a thing or two about producing quality sound and the company has just released a new range of speakers and soundbars for your television.

The Envision Cinema range is aimed at the discerning television viewer who wants a little more out of the audio side of their entertainment experience.

There are three new products in the line-up – the LS-T10 TV speaker system and the LS-B40 and LS-B50 soundbar system.

While TVs are getting bigger and thinner, some of the onboard speaker systems are not improvong in line with the picture quality and connectivity options which is demand for products like Onkyo’s TV speakers are in huge demand.

Each Onkyo system incorporates Bluetooth to allow for audio streaming from devices like smartphones, tablets and laptops.

Also on board is a USB port and a 3.5mm input to access other digital audio content and to connect other devices.

And for added convenience, each of the speakers can also be controlled with your TV’s remote control without the need to program or learn codes.

This means they turn on automatically with the TV and can respond to the volume controls of the TV.

These products have been designed to not take up too much space but to still deliver impressive surround sound.

The soundbars can be placed either in front of the TV if it positioned on an entertainment unit or below it on the wall if the screen is wall-mounted.

The LS-T10 actually sits underneath the TV’s table top stand and can support 55-inch TVs that weigh up to 35kg.

The LS-T10 sits squarely underneath the TV’s stand so it’s not going to take up any more room that you’re not already giving up for the screen.

The device has six powerful 7cm full range drivers built-in and a 12cm down-firing subwoofer with a discrete digital amplifier.

Also on board is six-channel digital amplification and Dolby Digital decoding from Blu-ray and DVD discs.

There are also three different sound modes to suit the content you’re watching and listening to – news, music and movies.

The onboard DSP (digital signal processing) produced the AuraSphere 3D surround effect which will have viewers hearing sounds coming from parts of the room where there are no speakers.

And best of all there is just a single cable connection between the speakers and your TV.

These soundbars are suited to larger TVs 40-inches and above and also feature the same single cable connection as the LS-T10 along with the three sound modes: news, music and movies.

And both also offer the same AuraSphere 3D surround sound output will immerse viewers into the on-screen action.

The LS-B40 has a three-way speaker system with eight precision drivers for excellent digital amplification.

The LS-B50 has a two-way speaker system and also has those eight precision drivers under the hood but also comes with a separate wireless 16cm down-firing subwoofer.

Most Australian travellers in fear of high mobile roaming costs