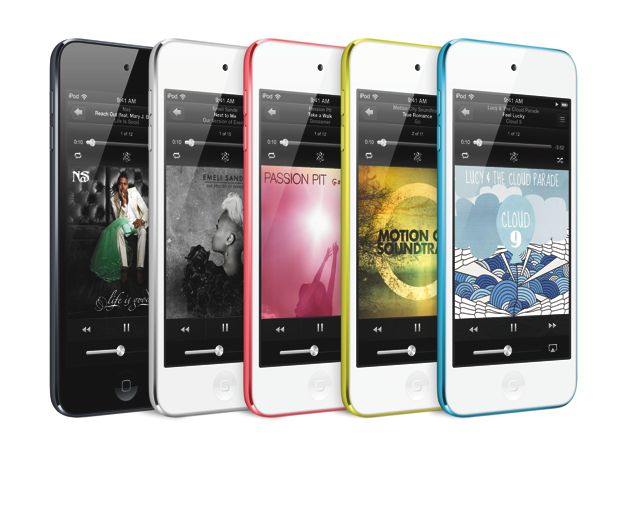 Apple’s new iPod Touch and iPod Nano are a leap forward in terms of design and quality that can only be truly appreciated when you get it in your hand.

These products were unveiled alongside the iPhone 5 last month and have only just been released in stores.

The iPod Touch inherits the iPhone 5’s 4-inch Retina Display while the iPod Nano has been completely redesigned.

Thin and light has been taken to the next level with the new iPod Touch.

At just 6.1mm thick and weighing in at 88g, the iPod Touch feels great in your hand. The slender dimensions can only be truly appreciated when you’re holding it.

The screen is identical to the 4-inch Retina Display found on the new iPhone 5 so allows for that extra row of apps and 16:9 aspect ratio so you can watch your movies and videos full screen.

The rear panel of the iPod Touch is made of the same anodised aluminium used in Apple MacBooks.

And for the first time the iPod Touch is available in six different colours but these colours aren’t just painted on the surface, it’s actually bonded to the aluminium.

Also on the back of the device is a small button on the bottom left.

This button has no other function but to pop in and out to allow users to attach an iPod Touch loop wrist strap so it’s literally always on hand.

The loop can be easily taken on and off as the user pleases and, of course, the loop matches the colour of the iPod Touch.

The built iSight camera has 5 megapixel resolution and includes features like panorama, tap to focus, face detection and is also has an LED flash.

And the new and improved Siri is also available on the iPod Touch for the first time so you can find information and open apps just using by using your voice.

Siri’s knowledge bank can now extend to movies and restaurants and you can ask for all kinds of recommendations and suggestions.

Under the hood, iPod Touch is powered by the dual-core A5 processor with up to twice the processing speed and seven times faster graphics performance for better game play and movie viewing.

Also included with the new iPod Touch is Apple’s new EarPods which offer an huge improvement in sound quality over the previous version of the iPod earphones.

But one thing you won’t get with the EarPods included with the iPod Touch is the inline remote.

The version with the inline remote is included with the iPhone and on the EarPods which can be purchased on their own for $34.95.

The new iPod Touch also includes the smaller Lightning connector to sync and charge the device.

Why buy an iPod Touch when you can just get an iPhone? Well for one you don’t get a monthly bill with the iPod Touch and you’re not going to be annoyed by incoming calls.

And because there’s no need to power a cellular antenna to make and receive calls, the iPod Touch’s battery lasts almost twice as long as the iPhone.

And while there are still many ways to communicate with the iPod Touch, the emphasis of the product is fun. And that’s exactly what it is.

The new iPod Nano has gone through a number of redesigns in the past and the latest is quite a dramatic makeover.

The device is just 5.4mm thick, has 16GB internal memory and now features a 2.5-inch touchscreen – the largest screen to be featured on an iPod Nano.

The new smaller Lightning connector is also on board the device and it’s just as well as because the old 30-pin connector alone would have been thicker than the Nano itself.

Other firsts for the product is a home button and Bluetooth 4.0 for wireless connection to your music.

On the design side the iPod Nano is smaller than a credit card and, because it’s so thin, it can easily fit in your pocket.

The 2.5-inch screen on the latest Nano is almost twice as large as the screen on the previous model so there’s more room to view your photos and watch videos.

The iPod Nano is not running iOS so you can’t install any new apps but content like pictures, music, videos and podcasts can be synced through your computer.

Being so small and light the iPod Nano is ideal for users who want to hear their music on the go or while they’re exercising without the interruption of a call or message.

And what makes it even easier is the Bluetooth connectivity which means users can pair the device a wireless pair of headphones, speakers and in-car kits to enjoy all your tunes without cables.

The screen is also the same 16:9 aspect ratio as the iPhone and iPod Touch so for watching movies on the device fills the entire screen.

The new EarPods are also included with the iPod Nano but it doesn’t have the inline remote and volume controller.

But what users will find is that remote found on the earphones has been incorporated into the left side of the device.

So instead of just having volume up and down, there’s also a middle button to pause and navigate your music as you would with the headphones remote.

The iPod Nano is available in eight different colours and your chosen colour is matched with the screen’s wallpaper.

This is easily the best iPod Nano Apple has produced and a handy way to stay close to your favourite content in a small, sleek package.

WD’s My Passport for Mac portable drive for easy, secure back up