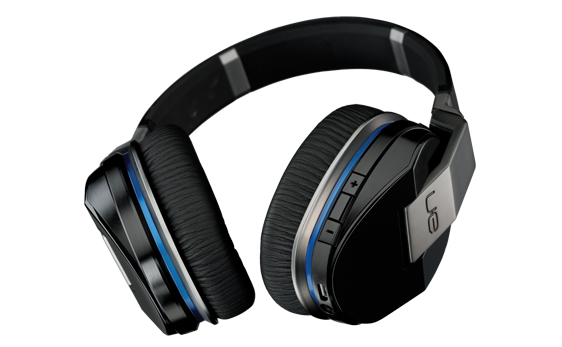 Logitech has released the UE 9000 headphones which packs high quality audio, noise cancellation and wireless Bluetooth connectivity all in the in one product.

Listeners can get rid of the cables along with the ambient noise while still enjoying their music in all its glory.

The UE 9000 headphones have a distinct look as well as a distinct sound.

Logitech UE 9000 headphones exude quality with articulated joints with metal alloy hinges on each ear cup that also include memory foam cushions for a comfortable fit.

The headband is also padded on the inside to ensure even lengthy listening sessions won’t cause any discomfort.

There are controls on each ear cup. On the right are volume and navigation buttons so you can control your music along with the on/off and Bluetooth pairing switch.

On the left ear cup is a listen through button which can mute the music so you can hear what’s going on around you.

The UE 9000 headphones can fold flat when not in use and can be stored securely in the supplied carry case.

Included with the headphones is a USB charging cable and AC adaptor along with an audio cable so users can opt for a cable connection to their audio source instead of wirelessly through Bluetooth.

Apart from its good looks, the Logitech UE 9000 headphones most attractive feature is its Bluetooth wireless connectivity.

The headphones will link to any compatible Bluetooth device like smartphones, tablets, desktop and laptop computers, MP3 players and the iPod Touch and the latest iPod Nano.

There is also active noise cancellation on board so the headphones can filter and reduce the ambient noise so all you hear is your music.

That, in combination with the over-the-ear design, means you’ll be immersed in your own sounds and hear every note.

When it comes to audio, the UE 9000 has to not only deliver great sound, but it also has to deliver that sound wirelessly.

Onboard the device are laser-tuned drivers to provide a wide soundstage and, on the wireless side, advanced digital signal processing and Bluetooth for a consistent connection.

Linking to a device wirelessly using Bluetooth is quick and easy. If you’re wearing the headphones during the pairing process you’ll hear a sound while it’s searching for the device and then another sound to indicate a successful connection.

Once that connection is established you can put your device away as long as you stay within a 10-metre range.

For my testing I connected the UE 9000 to the new iPod Nano, which now has Bluetooth on board, and I was able to walk around my office and other rooms in the house and still be able to hear my music.

There were no cables and no need to carry the iPod Nano with me.

And if I wanted to move to the next or previous song, play a song again, pause a song or adjust the volume I could do all of that using the controls on the right ear cup.

And what about the audio quality? The UE 9000 sound is impressive with good representation across the entire sound range. Bass could have been a touch stronger but it certainly didn’t impact the entire listening experience.

When we attached the cable and physically connected to the iPod Nano, the sound quality went up another gear and even the bass improved.

Another advantage of having the cable attached is the inline microphone and remote so it could be used to answer calls if you’re connected to your smartphone.

The battery on board can be recharged using the supplied USB cable when it’s connected to either your computer or to the supplied AC power adaptor.

It takes about three hours for a full charge when connected to the AC adaptor to get about 10 hours of use.

And if the battery dies on you, the music doesn’t have to end there as long as you have the cable handy.

Speaking of noise cancellation the UE 9000 does block out a fair amount of ambient noise but it’s not in the same class as other products from Bose, Sony and Dr Dre.

But what the Logitech UE 9000 brings to the table that these other noise-cancelling models don’t is the wireless connectivity which will be the main attraction for most users.

The Logitech UE 9000 headphones are a standout product that manages to combine quality and convenience features in a single unit.

On the quality side it makes your music sound great and in terms of convenience you can kiss those cables goodbye.

And, thanks to the excellent design, you can look good doing it.