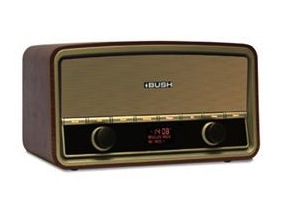 Bush has released an impressive redesign of its signature 1950’s style digital radio – the Heritage – which offers retro looks and the latest technology.

The Bush Heritage is available in two finishes – real woodgrain or high-gloss piano white – but have the same design with a large metal grill above two large control knobs and a digital display.

But under the hood, despite having the old looks on the outside, there is the latest DAB+ digital radio technology with crystal clear sound and extra stations.

On the audio side there are two 10-watt stereo speakers so the Bush Heritage can easily provide the background music or the foreground music in any room.

Also included with the Bush Heritage is Bluetooth so you can utilise its powerful speakers to stream music from other devices like smartphones, tablets and computers.

The high contrast display makes it easy for listeners to see information from the station they are tuned into including song and artist listings and even talkback radio numbers.