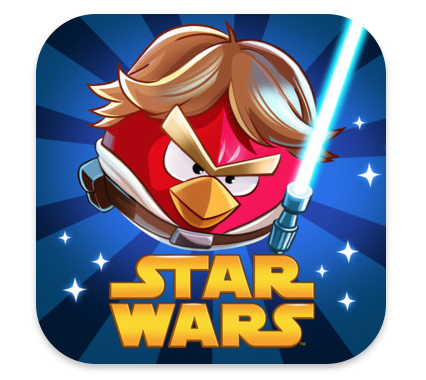 The popular Angry Birds characters have entered the Star Wars universe with the release of the brand new game for mobiles and tablets.

And their pig enemies are disguised as a number of Star Wars enemies including tusken raiders, stormtroopers and even Darth Pig himself which is actually two pigs standing on top of two other pigs and wearing the familiar black mask.

Each level is a different planet from Star Wars starting off with Tatooine and moving on to Dagobah and eventually the Death Star.

Each of the Angry Birds Star Wars characters have their own abilities. Luke Skywalker wields a light sabre, Han Solo brandishes a blaster, Obi-wan Kenobi used a Force push and Chewbacca just crushes everything in his path.

Between levels there are several storyboards which replicate scenes from the original film but with an added bird and pig flavour with even the well-known Star Wars vehicles taking on a whole new look.

If you’re a fan of Angry Birds and a fan of Star Wars then you’ll find this already addictive game even more appealing.

Australian seniors show they are tech and socially savvy