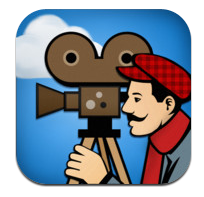 After the huge success of the Oscar-winning silent film The Artist there is a new app which can turn your own videos into a vintage film.

You can also choose your music which, because the film has no-one speaking, can really determine the mood of your film.

The lower the resolution the smaller the file and the easier it is to share.

Other choices include opting to include noise and scratches to the video to give it that aged look as well.

There is also an option within the app to upgrade to the pro version for an additional 99 cents that adds title cards with different fonts, film transitions and ability to add pictures and mix different video clips.

Once the film is complete the Silent Film Director app then processes the video which can take a little depending on the quality and length of the film.

And of course the whole point of making this kind of movie is sharing the results with your family and friends.

So if you’re a frustrated director who wants to return to Hollywood yesteryear then Silent Film Director is the app for you.

In fact it is possible to submit your film to the International Silent Film Contest through the app.

It is available now from the iTunes App Store for $1.99. The in-app purchase to upgrade to the Pro version is 99 cents.