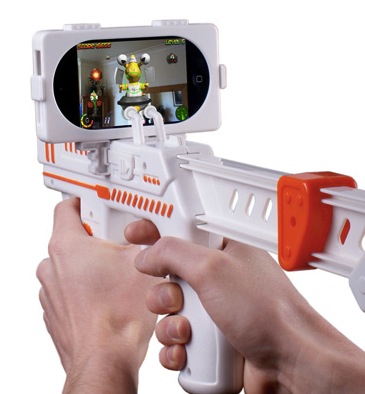 We’ve seen some amazing apps and some equally amazing accessories to use with those apps.

One of the latest is the AppToyz AppBlaster, distributed by Gadget King, which can be used with three augmented reality shooting game apps.

Players clip their iPhone or iPod Touch into the AppToyz AppBlaster and the apps overlay the virtual targets into your surroundings.

The AppBlaster has two handles and two triggers and is light enough for anyone to use including kids.

The apps use the iPhone or iPod Touch’s camera so you can see your environment on the screen and, at the same time, places virtual targets on the screen whether they are alien attackers, tin cans or clay discs.

With the accelerometer on board the app becomes a 360 degree game with the possibility of targets appearing all around you so players need to keep moving.

The twin triggers activate small foam pads that gently provide the conductive feedback to the iPhone or iPod Touch screen.

Two others – Overkill and Marine Sharpshooter – are due for release in the near future.

The AppToyz AppBlaster turns a touch screen game into a first person shooter game with players able to shoot bullets, lasers and grenades at the enemy or the targets on their screen.

Each game has multiple levels, numerous targets and enemies and the ability to upgrade your weapon’s strengths and abilities.

To reload players tilt the AppBlaster up 90 degrees.

The AppBlaster can be used on its own or with the included shoulder stock extension.

It’s compatible with the iPhone 3GS, the iPhone 4 and the iPod Touch 4th generation. An included insert makes the thinner iPod Touch fit perfectly inside the holder.

The AppToyz AppBlaster is priced at $49.95 and is available from Kmart, Australian Geographic, Myer and other major retailers.