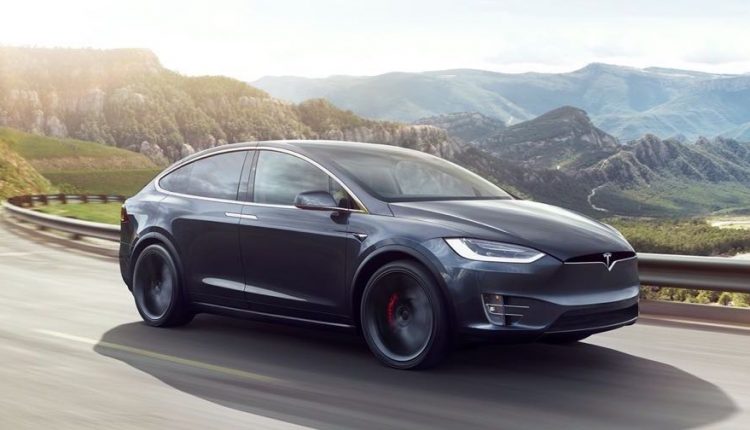 This was our challenge when we drove the Tesla Model X to the Hunter Valley to attend the Midnight Oil concert at Hope Estate.

We decided to make a weekend of it so we packed up the Model X and headed off.

The Tesla Model X P100D has the same wheelbase and motors as the Model S P100D that we drove a few months ago.

You still get the instant torque Tesla is famous for so you can go from 0 to 100 km/h in just 3.1 seconds.

Let’s just say that sort of performance really pushes you back in your seat. Something all the men on our trip wanted to experience for themselves.

The Model X is also a seven seater but for our trip we folded down the three rear seats to make more room for our bags and our golf clubs. 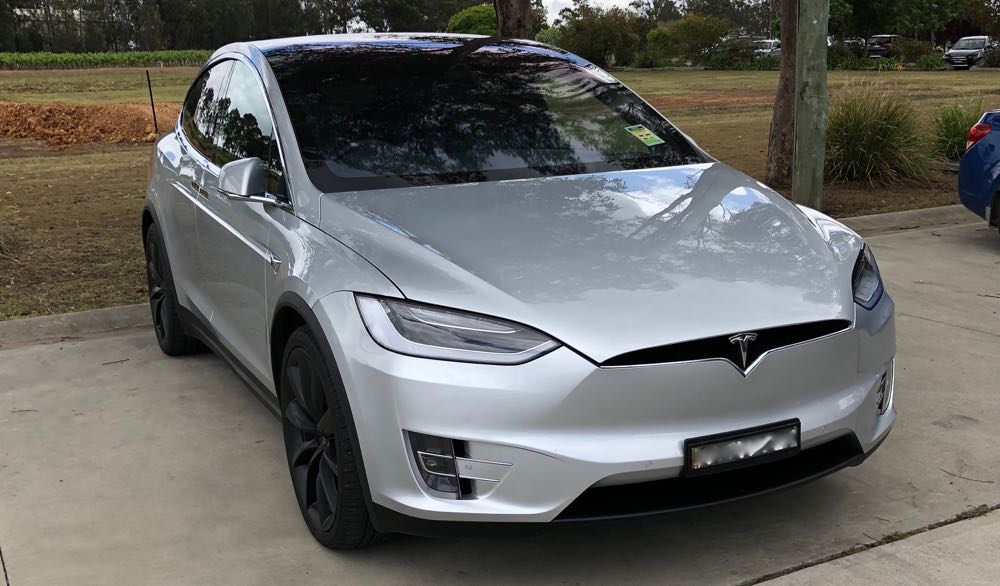 The two rear doors open up gullwing style just like the DeLorean in Back to the Future.

That certainly made us the centre of attention when we were picking up people in the car.

The car’s key is shaped like the vehicle and gives you complete control to open the doors as well as the front and rear trunks with the press of a button.

Even when you approach the car with the key, the Tesla Model X unlocks and pops open the driver’s door.

All the doors can be opened and closed from within the vehicle as well which makes pickups and drop-offs a little bit faster and easier.

And, of course, this is an electric car so you do need to keep an eye on the battery as you would your fuel gauge on a regular car.

We had four people in the car for the drive to the Hunter Valley which usually takes just over two hours.

When we set off we had a battery level of 97 per cent. 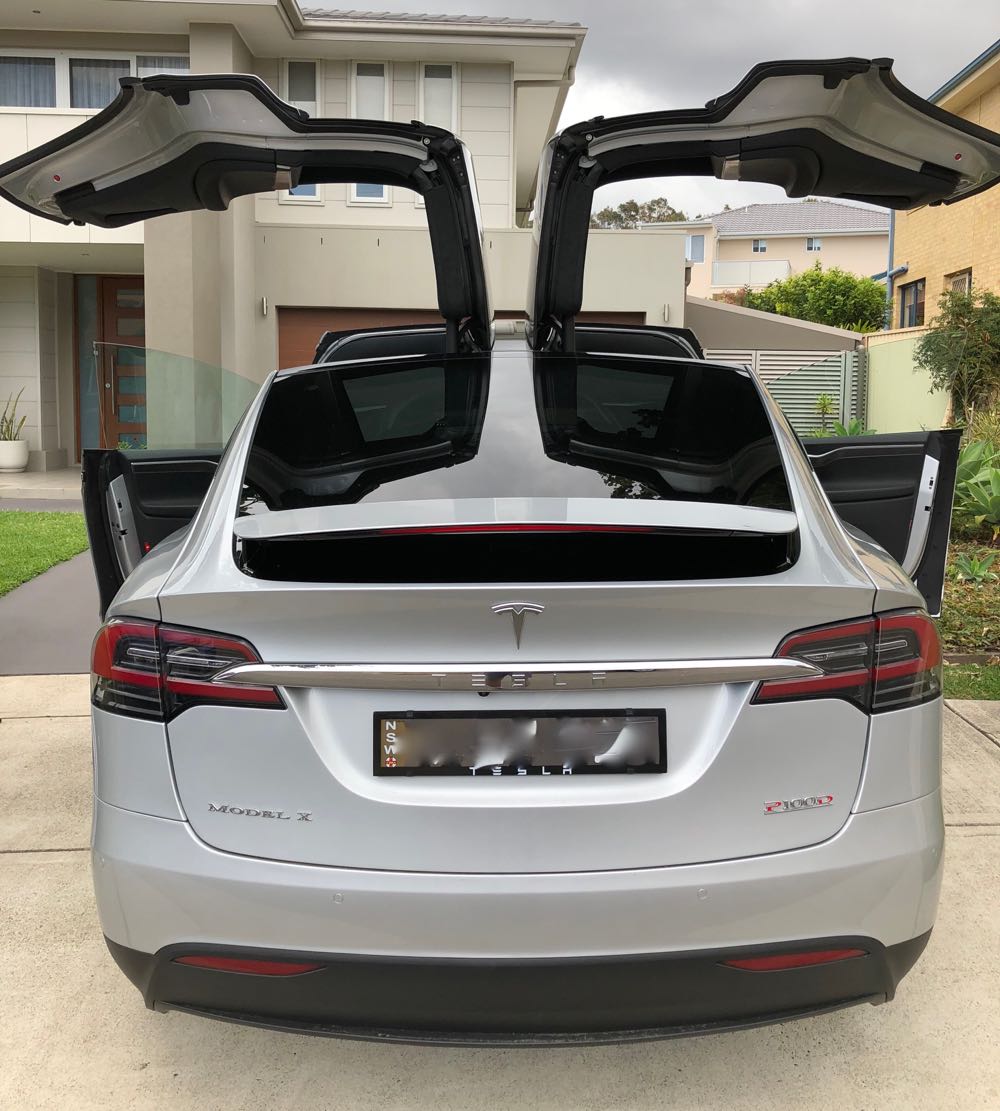 We set the GPS destination and the great thing about that was the system worked out what our battery level would be when we arrived.

It estimated 38 per cent. When we arrived it was 39 per cent. The Tesla Model X has got your back when it comes to the battery.

If we’d entered an address outside the car’s range, it would have told us it was beyond the charge level of the battery and planned a stop at the nearest charger along the way.

Tesla has been installing charge points up and down the east coast of Australia to allow Tesla drivers to take their cars out of the city and know there are plenty of places where they can top up the battery to make it back home.

We didn’t have this problem for our trip to the Hunter Valley.

When we arrived at the place we rented for the weekend I parked the car close to an outdoor power point and connected the car’s charging cable and left it charging overnight.

The next morning, we had an extra 16 per cent charge.

We’d booked a round of golf for four of us on the Saturday morning at the Crowne Plaza Hunter Valley (there was plenty of room in the car for all of our golf clubs) and I found, through a handy app called PlugShare, that there was a charger at the hotel. 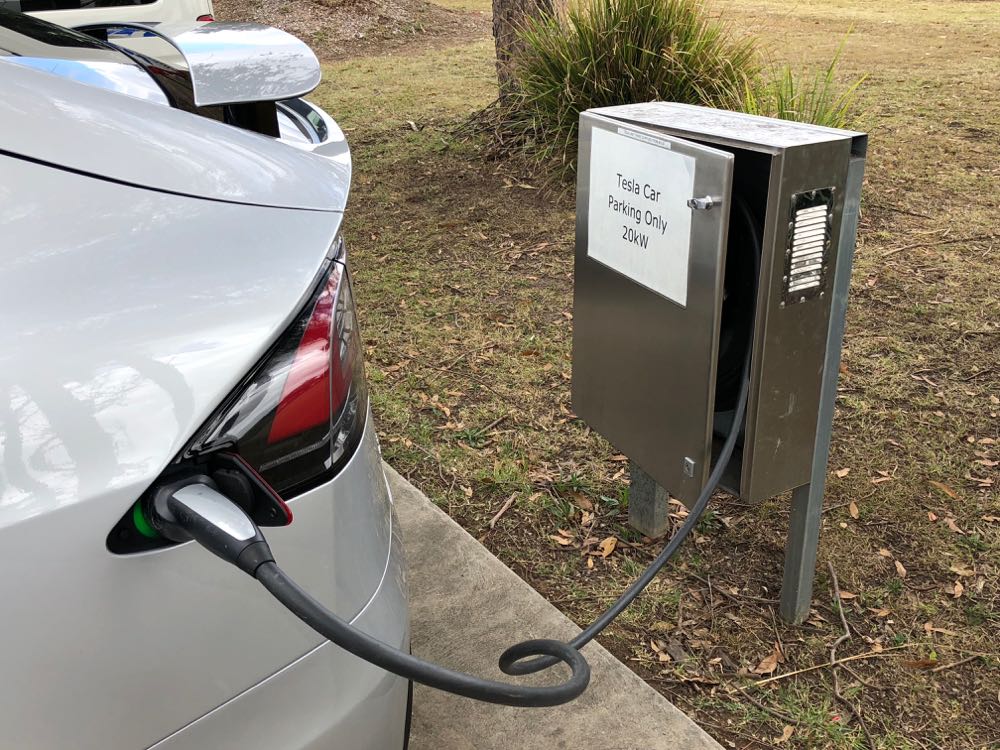 I found the plug and backed the Tesla Model X into place. This was going to work out great, I thought, because I could charge the car whilst playing golf for a couple of hours.

But the charging station belonged to Charge Point and I needed a membership card to unlock the charger.

I didn’t have a card so I couldn’t use the charger. I asked hotel reception and they couldn’t do anything about it despite my offer to pay to use it.

I needed the Charge Point card to access it. I didn’t have one so that was a no-go.

So, I parked the car in a regular spot and played my round of golf with my three buddies.

We played our nine holes and, after checking the PlugShare app, I noticed there was not one, but three, charging stations at the nearby Petersons Winery.

I left my three friends at the hotel’s brewery to drive up the road to Petersons. Not surprisingly, they were happy to stay and have a drink for an hour or so while I topped up the Tesla Model X.

I pulled in to the Petersons Winery car park and found the chargers right away. They were reserved for Tesla electric vehicles and all three spots were empty.

I backed into the spot which had the faster 20kW charger (the other two were 7kW) and plugged it into the car.

By now, the car’s charge was 48 per cent and it said it would require two hours and 45 minutes to reach 100 per cent. 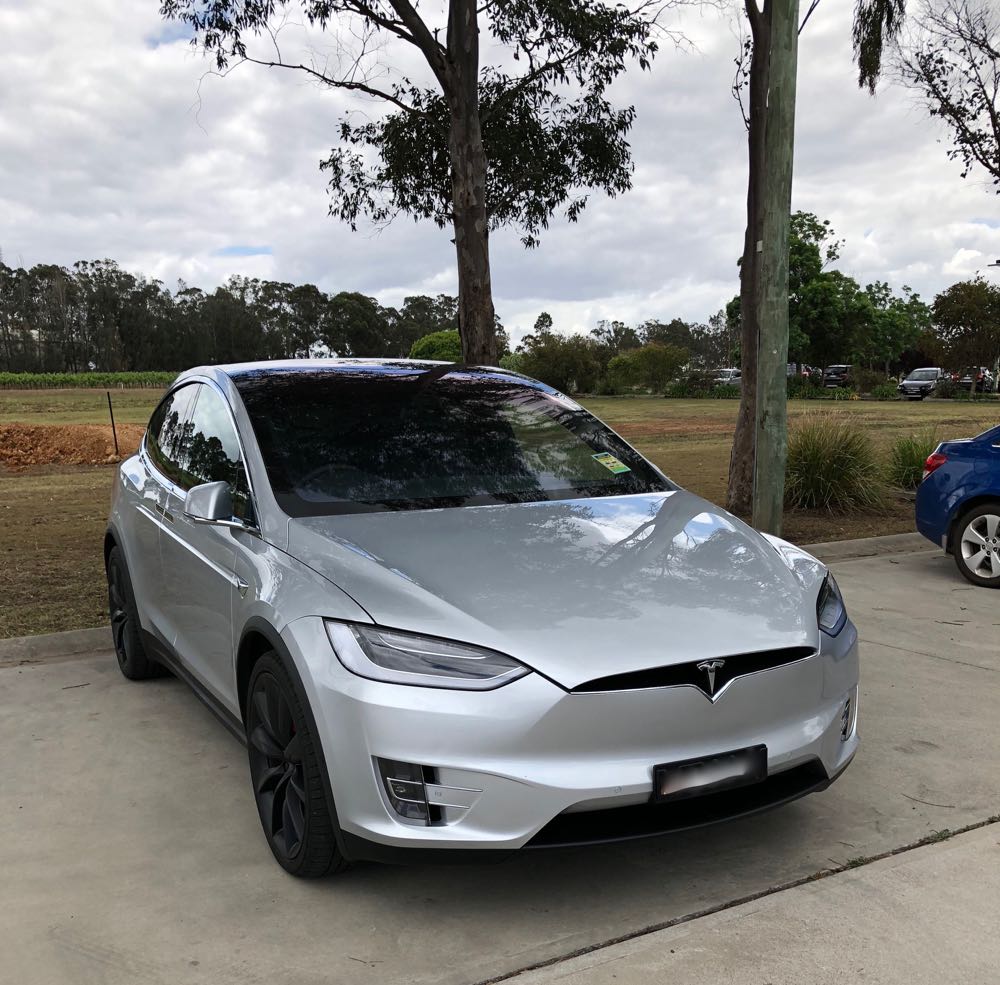 I didn’t have close to three hours to spare but I didn’t mind spending an hour waiting for the car charge to be topped up.

That’s the one downside of having an electric vehicle you have to wait for it to charge.

A regular fuel-powered vehicle can fill up in 10 minutes and you can be on your way.

I couldn’t do that with the Tesla.

Anyone who buys a Tesla will usually set up a charger in their home so the vehicle can be charged overnight.

So, there’s a lot less battery anxiety when they’re driving around during the day.

A home with single phase power can charge a Tesla battery in about eight hours and if you’ve got three-phase it will take about six hours.

Meanwhile, back at Petersons Winery, I went and bought a drink and some chocolate bullets from their chocolate store and sat outside listening to my audiobook for the next hour. 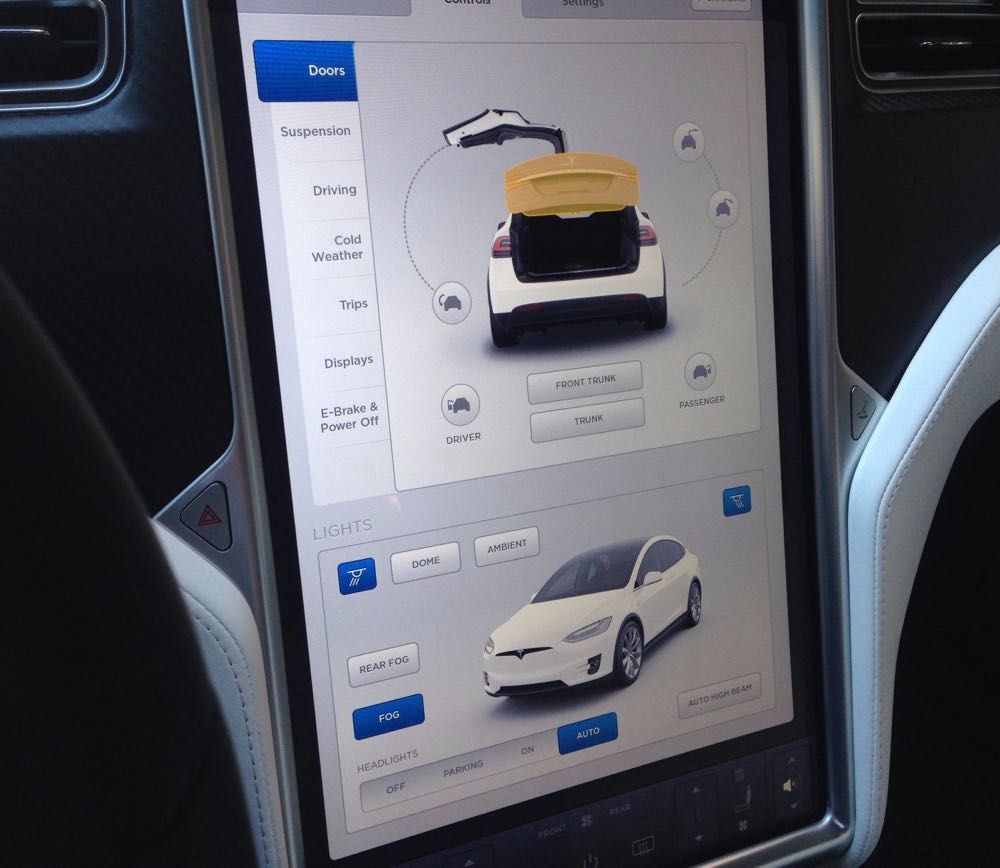 An hour later, I had an additional 20 per cent charge on board and set off to pick up my mates from the golf club’s brewery.

I pulled up in the Tesla Model X and opened all the doors and the trunk from the large touchscreen inside and they were able to pack away the golf clubs and climb back into the car in seconds.

We got back to the house and I backed the car into the same spot and connected the charging cable to the Tesla so it could continue to be charged while I was at the Midnight Oil concert.

We were getting picked up in a bus so I could leave the car on charge all afternoon and all night. 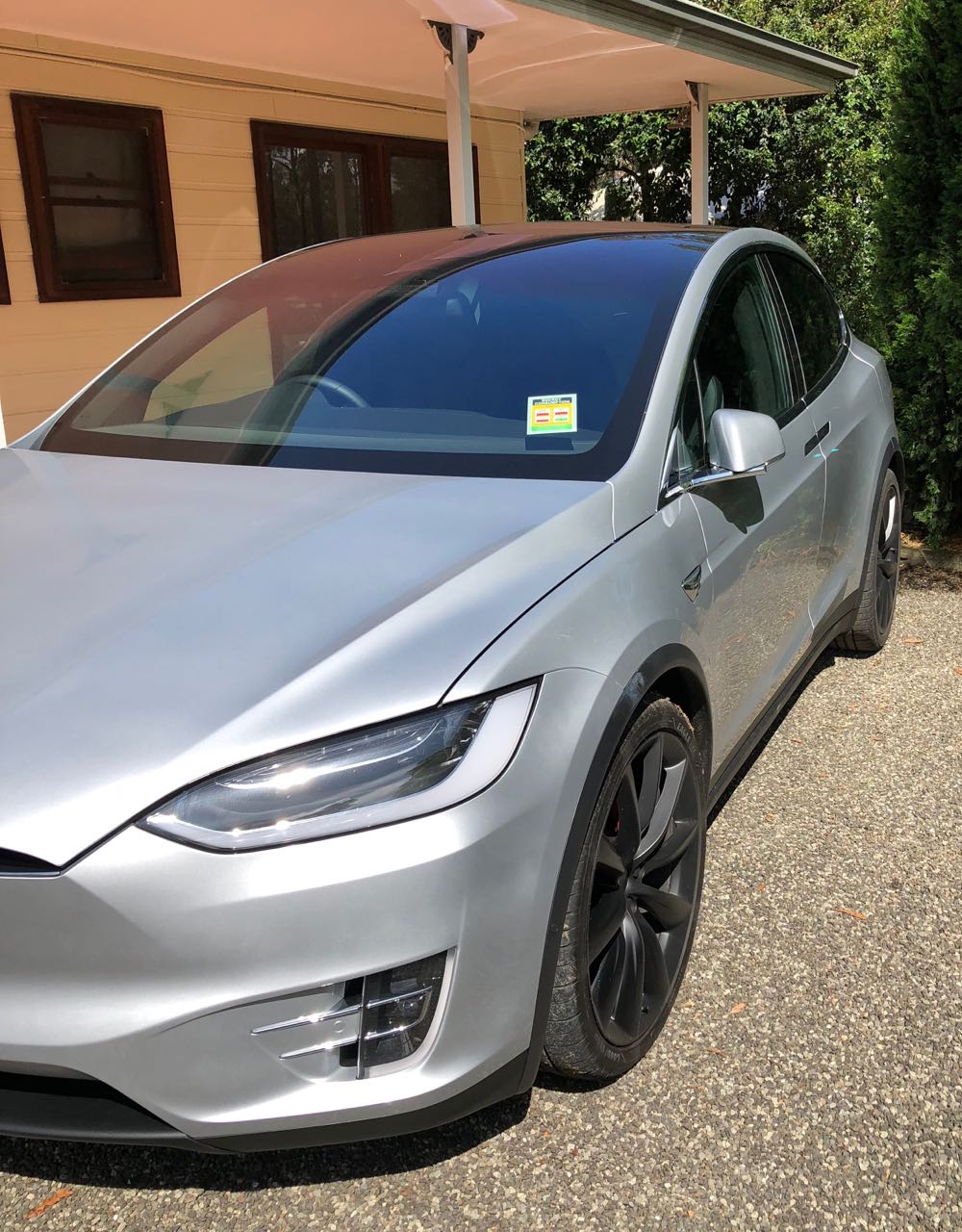 We got home from the concert at about 11PM and the car had already hit about 85 per cent on the battery. I went to bed and left the car charging and by the time we woke up it was at 98 per cent.

Perfect. I had more than enough battery power to drive back to Sydney.

With so many battery chargers around, and even more to come, there will be no such thing as battery anxiety if you’re a Tesla driver. Or if you have any other electric vehicle.