The official poster for the eagerly-awaited film Star Wars The Force Awakens has been released and it shows most of the characters and vehicles but also raises a few new questions at the same time.

The Star Wars: The Force Awakens opens in cinemas on December 17 with advanced ticket bookings also being offered from today.

The new poster shows all of the major characters including new additions like Kylo Ren and his cross hilt lightsabre, Rey with her staff, Finn holding a blue lightsabre (believed to be the same lightsabre Luke Skywalker lost when his hand was sliced off by Darth Vader in Empire Strikes Back), droid BB8, X-Wing pilot Poe Dameron and silver-plated stormtrooper Captain Phasma.

And there were some old favourites in there as well including Han Solo, Princess Leia, Chewbacca, R2D2 and C3PO.

But where is Luke Skywalker? He didn’t make the poster and it has sparked speculation among fans. 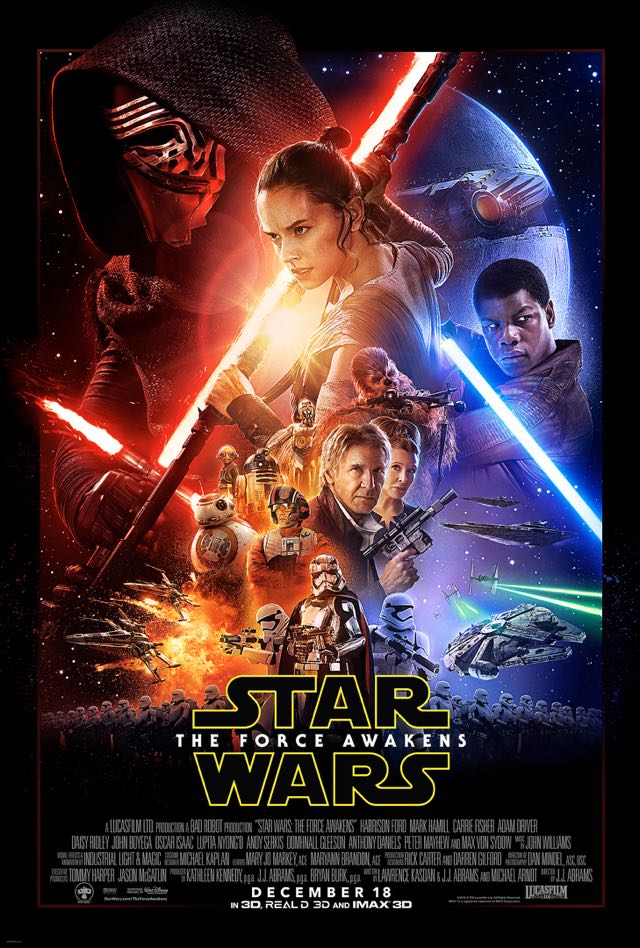 Luke and Leia’s face were not show in the two teaser trailers – but their hands were. Leia’s hand can be seen accepting a lightsabre (believed to be the same one Finn is holding in the poster) and what’s believed to be Luke’s mechanical hand being placing it on R2D2’s dome.

And what about the vehicles? The poster has revealed the Millennium Falcon and X-Wing fighters with some star destroyers.

But the question every Star Wars fan is asking today is: What is that round Death Star-like craft in the top right corner?

Is it another Death Star? It has what appears to be a large cannon in the middle which leads us to believe it could be a planet-destroying weapon.

Tomorrow (October 20) sees the release of the latest trailer for the film which is set 30 years after the events of Episode VI – Return of the Jedi.

There were some teasers for the new trailer shared today.