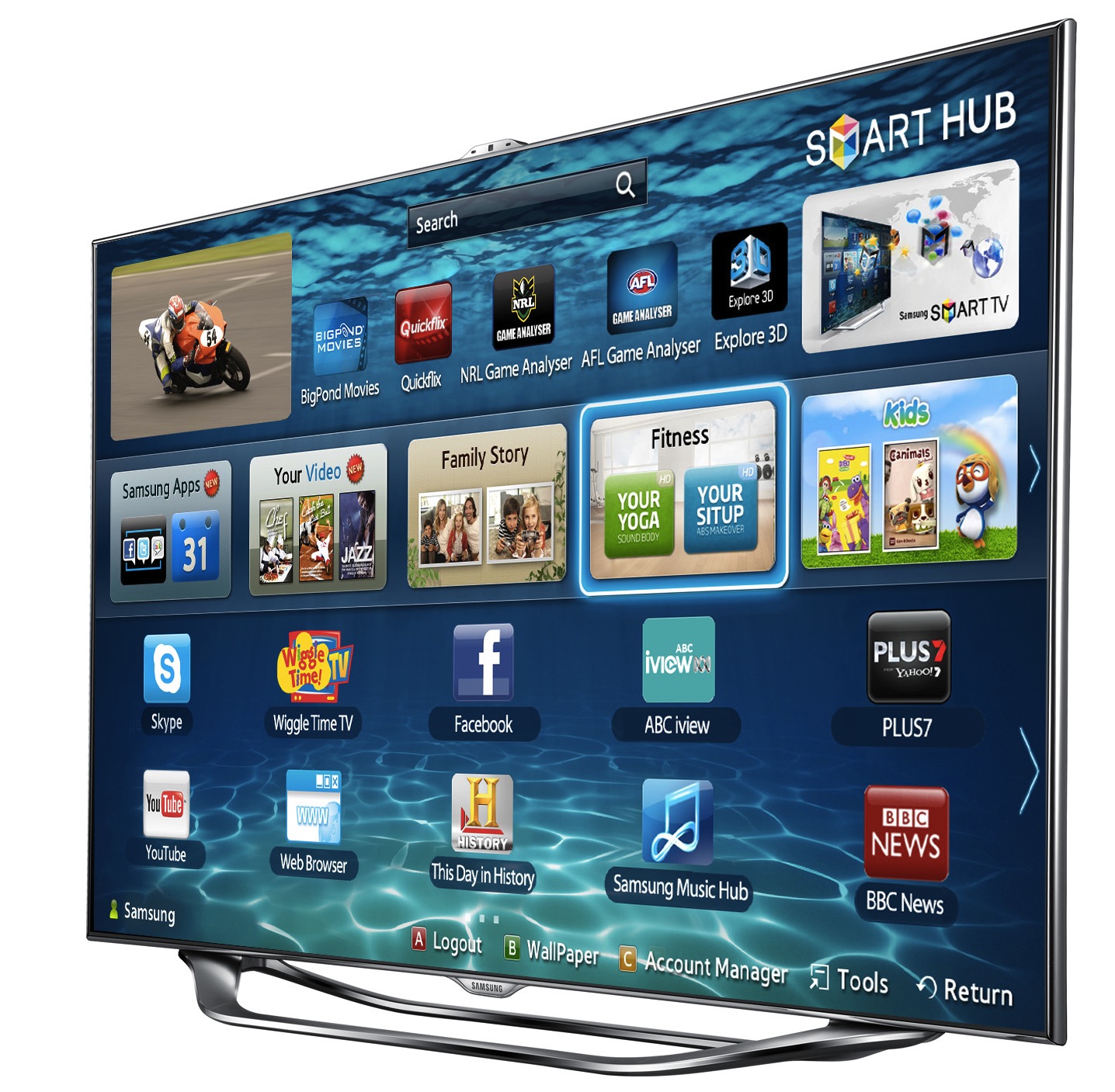 The range of LED and plasma models introduce new technology, new content and all-new ways to interact with the TVs.

There are four LED smart TVs and two plasmas in the new range.

All of these TVs also bring brand new features to the table – a built-in camera and microphone which can be utilised for gesture control and even for making Skype calls.

The Series 8 TVs also have an eye-catching design with an ultra-slim bezel design and a U-shaped stand.

And all of these TVs are upgradeable via a chip on the rear panel. Any Samsung Smart TV purchased from now on can be upgraded for five years using a $149 upgrade chip per year to have all of the latest features included into their current TV.

Picture quality is still the number one feature customers look for when buying a new television and the new Samsung 2012 models keep the flag flying with new enhancements.

These include Micro-Dimming technology which is powered by the TV’s onboard dual core processor to optimise the LED backlight and video signal for each scene in real time.

The result is a picture with improved contrast, deeper blacks, richer colours and excellent clarity.

On the plasma side, the Samsung’s Real Black Pro panel produces even blacker blacks, exceptional contrast and bold colours.

Thanks to the built-in camera and microphone on the new Samsung range there are new ways to interact with the TV.

There is voice and gesture control along with face recognition.

With voice control, viewers can simply talk to the TV to tell it what to do.

For example you can turn on the display by simply saying “Hi TV”.

Users can also change the channel adjust the volume, activate the Smart Hub and start the web browser with their voice.

Gesture control utilises the camera to allow users to do things like using your hand as the mouse for the smart TV’s web browser.

The camera also comes into play for Face Recognition. This feature allows the TV to recognise each user and set the TV to their preferences.

For example, Skype adjusts to the person who has been recognised by the TV and logs into their account complete with all of their contacts.

Samsung is also working on the same feature for the smart TV’s Facebook app.

There is also a Smart Touch remote with a built-in microphone to execute voice commands without speaking too loudly.

The remote also has a trackpad similar to the one found on laptop computers to make it easy to navigate the Smart Hub and on-screen web browser.

With a Samsung Smart TV your viewing experience is now a connected one which means users can access content via their broadband connection.

Kids consume 48 per cent of the TV content on our screens and Samsung has responded with a content supply tailored for just for the little ones.

The Samsung Smart TV can also be your fitness instructor with a complete and interactive fitness program. Users can even connect a set of wi-fi scales to keep track of their progress.

But on the entertainment side the Samsung Smart TV now has a wide variety of choices for viewers.

From July users can view a packages of Foxtel channels (as exclusively revealed by Tech Guide back in January) along with Bigpond movies, QuckFlix subscription movie channel and catch up TV services like ABC iView and PLUS7.

Being able to access your content from anywhere whether you are in front of your Samsung Smart TV or not is now easier than ever.

AllShare Play allows viewers to share content on their own network and also out and about on their compatible Samsung tablet or smartphone.

Within the home Smart View means it’s possible to watch a second channel or source from the Samsung Smart TV.

For example, if a person is watching a program in the TV itself, it’s possible for a second person to watch another program by streaming it to their smartphone or tablet.

Samsung Smart TV customers will be given 5GB of cloud storage and anything stored there can be accessed anywhere you have internet access including on someone else’s Samsung Smart TV.

The entire range of the 2012 range of Samsung’s Smart TV are available now with the top of the line Series 8 LED 60-inch TV arriving in stores in June.