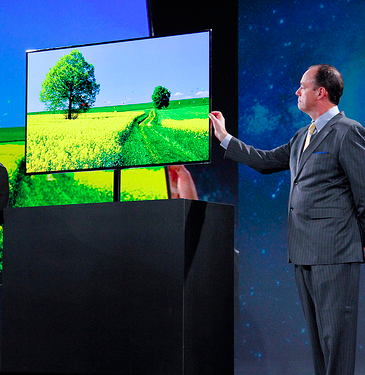 Samsung has launched its new flagship smart TV at CES – the ES8000 LED – which will recognise who is watching it and offer voice and gesture control.

The company also took the covers off what it called its “Ultimate TV” – a 55-inch Super OLED TV.

Also unveiled was a plan to release a future-proof television, which will include a slot in the back of the TV to update the brains and processor of the TV.

The new ES8000 LED and 55-inch Super OLED display will be even more powerful with a dual core processor to allow multitasking and also features a built-in camera and even more apps.

The Super OLED screen handles colour on a pixel bi pixel basis so colour reproduction is a vast improvement even from the already high quality LED TVs.

Super OLED is also 1000 times faster than LED so there is no such thing as motion blur when watching sports or action films.

With television, one of the biggest fears among consumers is buying a model that will be outdated in a few short years.

Samsung are doing something about with what it calls a future-proof TV. The full high definition TV will have a removable slot on the side of the TV to allow customers to buy the latest version of the processor and brains of the smart TV.

There has been no release date or pricing for Samsung’s new 2012 range of TVs.

The theme for the Samsung press conference was pushing boundaries – to make life simpler, smarter and more enjoyable.

To accomplish this goal Samsung will be focusing on making it even easier to connect devices in the home and share a wide range of content across a wide range of devices.

And the smart TV will play a more central role to achieve that aim across Samsung’s portfolio of products.

With the new range of Samsung Smart TVs users will be able to talk to the TV to do things like change the channel and access content and apps.

There will also be gesture control so users can navigate menus and the smart TVs web browser.

Users will be able to use their hand as a mouse to move the arrow around the screen and can click with a squeeze of their hand.

Family members will be able to send and share pictures, videos and memos via the smart TV from inside and outside of your home network.

And the new display can also help viewers get in shape with new fitness content and programs available to watch and experience directly in the screen.

Apps are a big part of the Samsung smart TV road map and already there are more than 25000 apps available worldwide and more than 20 million downloads worldwide.

This is thanks to the Samsung program which encourages developers to create apps for their smart TVs.

And with the new voice and facial recognition and gesture controls the tool kit for developers has just been expanded further than ever.

Speaking of apps, one of the most popular apps games in the world – Angry Birds – will also become available on Samsung Smart TVs in 2012 as well.

The smart interaction between smart TVs and other products is all thanks to the AllShare technology built into Samsung devices.

The AllShare feature will now be included in wi-fi compatible smart cameras and camcorders to create all new experiences.

Samsung also the SH100 – the company’s fourth generation wi-fi camera – which makes sharing photos even easier. Pictures can even be emailed or shared to Facebook directly from the device.

Another impressive feature is the ability for compatible Samsung AllShare devices like smartphones and tablets to be used as remote viewfinders which can adjust the zoom and activate the shutter on the camera positioned metres away.