When it comes to consumer satisfaction about TVs, Samsung and Sony have been named as the joint winners of the Canstar Blue’s 2021 Award.

More than 1,200 customers who bought a TV in the last two years were asked to rate them in a number of categories including picture quality, value for money, sound quality, ease of use, design and smart compatibility.

The brands that were included in the Canstar ranking included Sony, Samsung, LG, Hisense, Panasonic, TCL, Bauhn, Kogan and JVC.

Samsung was awarded a five-star rating for four out of the seven categories – overall satisfaction, picture quality, design/appearance and smart compatibility.

Sony was also the only TV awarded five stars for its sound quality thanks to the company’s audio legacy which has carried across to its TV division.

Here are the best TV brands in Australia, as rated by consumers in Canstar Blue’s latest review:

“Today, we expect more from our TVs. From bringing families together to escapism, work and play, the TV experience continues to evolve with the times,” says Jeremy Senior, Vice President of Consumer Electronics at Samsung Australia.

“Australians are looking for bigger screens, more immersive sound and an easy-to-use Smart TV platform. To meet and even exceed customer expectations in these areas ultimately drives our product innovation year-on-year.

“We want all of our customers to be fully satisfied with the Samsung TV experience, which is why we continue to offer an array of sizes and models, including our unrivalled lifestyle range to ensure there is choice for every household.

“We are honoured to be awarded by Canstar Blue for the 2021 Customers Satisfaction Award for TV in Australia.”

TCL scored a four out of five score in all categories including overall satisfaction.

For value for money, LG, Panasonic and JVC scored the lowest score of three stars.

In LG’s case, the company’s premium OLED TVs – acknowledged as among the finest picture quality in the industry – are more expensive than conventional TVs because LG has exclusively mastered the technology and offers a premium point of difference.

But a brand like Bauhn scored a five-star score for value for money because these TVs, sold through Aldi, offer large screen sizes and much lower prices than the more established brands. 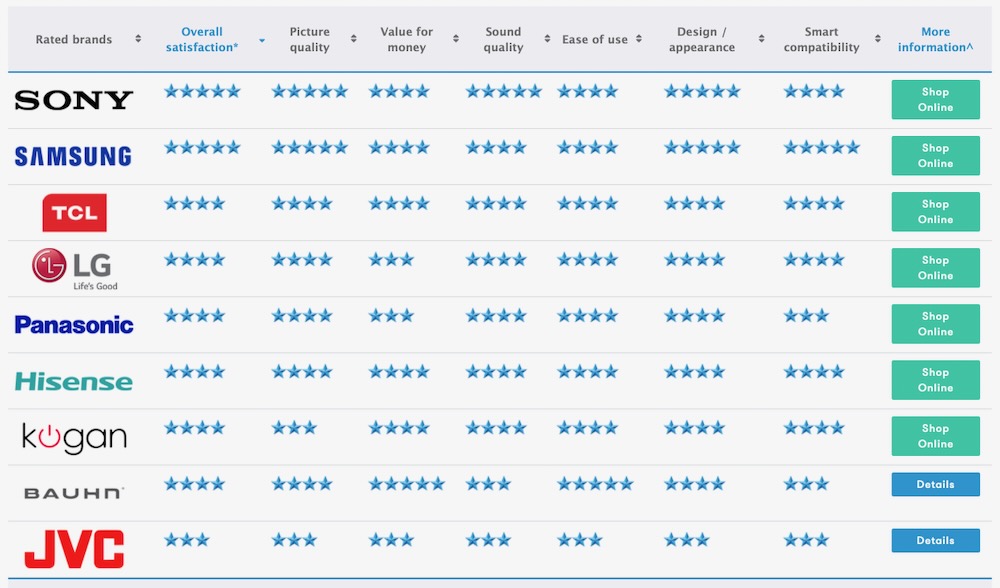 Bauhn also scored the only five-star Canstar rating for ease of use thanks to its familiar and user-friendly Google interface.

The lowest scores for picture quality were given to Kogan and JVC while Kogan scored four stars out of five for value.

The Canstar survey also showed that $984 is the average amount households spend on new TVs with 26 per cent purchasing the biggest TV they could afford.

Almost half (49 per cent) have a smart TV and use connected TVs functions and apps while 38 per cent said they use their TVs more for streaming than for viewing free-to-air TV.