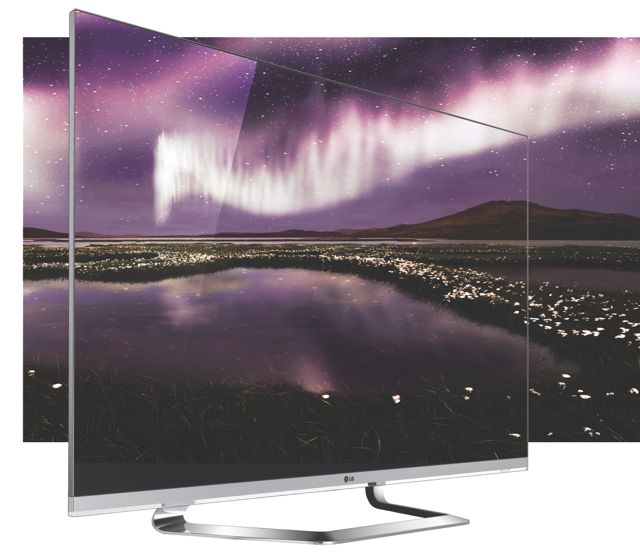 LG has unveiled its most advanced TVs to date with the launch of the 2012 Cinema 3D TV range which combine design and technology breakthroughs.

There are four main models in LG’s Cinema 3D Smart LED TV portfolio with sizes at 42-inch, 47-inch and 55-inch.

These new models connect viewers with their favourite content in 2D and 3D. LG has continued its support of passive 3D which uses the same lightweight polarised glasses used in cinemas.

Emphasis on design has been a major focus with the new Cinema 3D Smart TV range along with gesture and voice control.

The new LG TVs have even thinner bezels than ever before and a contemporary brushed metal look.

Another improvement is the floating stand. From the front the screen appears to hang in mid-air above a u-shaped metal stand that can still swivel up to 30 degrees left or right.

And being passive means the glasses don’t need charging and only cost $19 a pair so it won’t break the bank to have enough 3D glasses to go around to watch a movie or sporting event.

Four pairs of passive glasses are included with each LG Cinema Smart TV.

Gamers who choose to play against each other on the same screen usually only have a portion of the screen which is split in the middle either top and bottom or left and right.

Now, with LG’s Dual Play feature, each player can view their own full screen at the same time.

This is achieved using LG’s 3D technology to create two pictures from the same screen. The 2D picture is viewed wearing a special pair of Dual Play glasses.

One pair would enable player one to view the screen in 2D and the other pair would allow player two to see just their view of the game.

This technology can only be utilised from same source but an ideal use in future could well be viewing two different sources like the Blu-ray and free to air TV at the same time on the same screen.

That would certainly prevent a few arguments over what programs to watch at home.

The LG Smart TVs comes with a Magic Remote which acts like a motion controlled pointer to navigate the TV’s interface.

But the Magic Remote also has a microphone so users can dictate web searches and messages instead of laboriously typing them using an onscreen keyboard.

Gesture controls are also executed with the Magic Remote to bring up the recent apps used or to go to the previous channel.

Being a connected device, the LG Cinema 3D Smart TV allows content to be shared in your home network.

One nifty new ability is Wireless Display which mirrors your laptop screen on the LG smart TV.

With an Intel powered laptop that supports Wi-Di – short for wireless display – users can wirelessly stream their laptop screen onto the screen of the LG smart TV.

And it is all done without any loss of audio or video quality so it will work for HD movies, presentations, photo slideshows – anything that you can show on your laptop’s screen can be mirrored on the LG’s larger full high definition screen.

Another handy connectivity is being able to mirror the TV’s screen on an Apple and Android smartphones or tablets via a free app.

So if you need to leave the room and still want to watch the program, you can view the streamed video on your tablet or smartphone.

Viewers will be spoiled for choice when it comes to the content that’s at your fingertips with the LG Cinema 3D Smart TV.

From the dashboard users can access apps or and programs and even personalise their favourites to give them easier access.

Part of the content offering will be a dedicated 3D video channel to give owners access to programs which can be enjoyed on their Cinema 3D Smart TV.

Content on this channel will be free short documentaries to showcase the 3D effect’s strength but LG says it will be used to offer paid 3D content like movies in the near future.

The LG Cinema 3D Smart TV range is available now with the LM9600 arriving in store in May.