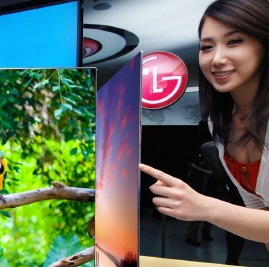 LG has kicked off CES with an updated range of smart TVs and smart appliances that offer more connectivity, control and content than ever before.

The company revealed it new 84-inch Ultra Definition display which has four times the resolution of a 42-inch full HD screen.

But the star of the show was the new 55-inch OLED panel which is just 4mm thick making it the thinnest, lightest and largest TV of its kind.

OLED is short for Organic Light Emitting Diode and creates its own lights source when a current is run through it.

This means there is no need for a backlight which is why the panel can stay so remarkably thin.

LG will also introduce Nano LED technology to these new models with the LED lighting embedded in the screen’s film for more accurate colour and greater contrast.

Design has gone to the next level with the Cinema Screen range having a barely-there 1mm bezel and a thickness of just 28mm.

What has also been improved is the ways viewers can interact with the smart TV.

The Magic Remote – which acts just like a Wii controller – has been enhanced to include scrolling and pattern gestures to perform certain functions.

LG’s TVs will also include voice recognition so the panel will be able to be controlled simply by talking to it.

3D is still a big part of LG’s plans and the company will continue to support Cinema 3D which can be viewed with lightweight passive glasses rather than heavier battery-operated models.

LG will also introduce in 2012 a range of 3D monitors and laptops which can be viewed without 3D glasses.

On the smartphone front LG will be advancing their development of LTE (Long Term Evolution) products which is otherwise known as 4G.

The company unveiled the LG Spectrum handset which has a 4.5 inch high definition screen, a 1.5Ghz dual core processor and an 8 megapixel camera capable of shooting 1080p full HD video.

The device’s screen will also have 329 pixels per inch and a cinema-like 16:9 aspect ratio.

In terms of smart appliances LG is one of the market leaders when it comes to connected refrigerators.

The LCD screen on the front of the refrigerator can be used to keep track of the food inside the fridge and create shopping lists.

It is also possible to set up profile for each family members based on their dietary requirements and their calories limits, if they are on a diet, and come up with recipes they will enjoy.

The blast chiller is handy if you wanted to make a can of drink or a bottle of wine cold in a hurry.

A standard size can be cooled in just five minutes with the blast chiller – something which took up to 40 minutes when stored in a freezer of a regular refrigerator.

A bottle of wine can be cooled in just eight minutes.