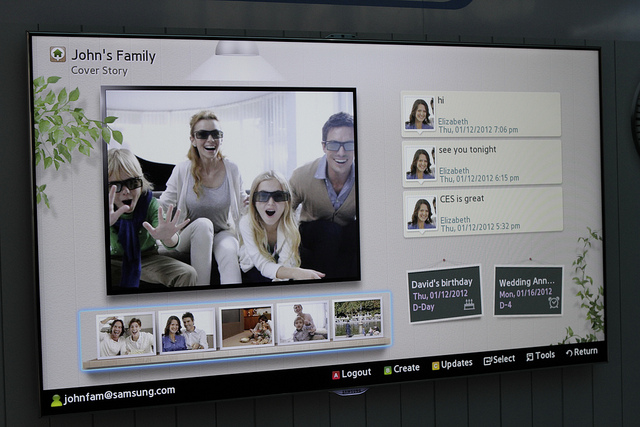 The once humble television is set to undergo quite a transformation in 2012.

If the new CES products and announcements are anything to go by, the TV is in for a big year.

New technology, enhanced picture quality, a new type of TV, news ways to interact and watch 2D and 3D along with even more intelligence, connectivity and content.

It’s a given that all TVs will have decent picture quality with full high definition resolution.

But delivering the added polish of accurate colour, deep blacks and remarkable contrast ratio is a battle that’s still on in earnest between manufacturers.

Samsung has introduced micro-dimming technology to its range of LED TVs which divides the screen up into 560 individual sections which each have the ability to light up or darken to suit the picture.

The result is even more detail and colour reproduction.

The smart TV theme introduced at the 2011 CES was even more expansive expanded at the 2012 CES with the being more at the centre of our network instead of the edge.

And because it is also a part of the network it is the best place in the house to display visual media like pictures and videos which can be shared wirelessly.

Samsung unveiled a new smart TV feature at CES called Family Story which is like a household’s private Facebook page.

Everyone in the family can create their own profile on the TV and send content like notes and pictures to the display.

It’s also possible to access that content along with memos and alerts from a smartphone or tablet using a dedicated Samsung app.

Sony also introduced a feature called PlayMemories which will allow users to share their content online with other connected Sony devices like Bravia TVs, tablets, smartphones, the upcoming PlayStation Vita.

Apps will also expand on smart TVs just like they have on smartphones.

Forget the remote control, the new TVs of 2012 will be able hear, see and recognise us.

Both Samsung and LG demonstrated voice and gesture control on their respective stands at CES. Samsung has also added facial recognition to identify different users within the household..

LG’s TVs will require an accessory to enable this feature which looks a little bit like Microsoft’s Kinect for the Xbox 360.

Samsung’s TV, on the other hand, will have a built-in camera and microphone to enable features right out of the box.

Tech Guide watched a demonstration where the channels and volume were changed by talking to the screen. Voice can also be used to search for content.

Gesture controls also allowed us to move the pointer on an onscreen browser with the open palm of your hand. Clenching your fist clicks on the link or app you’re hovering over.

LG’s demo also showed the volume being adjusted up and down by winding your hand on a clockwise or anticlockwise direction.

There was the usual line of LCD, LED, plasma and projectors at CES but they were joined the newest member of the family – OLED.

Organic Light Emitting Diode (OLED) is a naturally occurring material which produces it own light when a current is passed through it.

The result is a wafer thin TV because there is no need to add an artificial backlight to the screen.

Picture quality also easily exceeds that of LED and plasma thanks to pixel by pixel light control for greater accuracy and sharpness and the blackest black you’ll ever see on a TV screen.

Samsung and LG were showcasing 55-inch OLED TVs on their stand. They will probably be priced between $8000 and $10000 when they are released in September (Samsung) and October (LG).

Samsung’s OLED TV measured less than 1cm thick and contained all the tuners and outputs on the screen itself.

LG’s offering was just 4mm thick and it saved a number of millimetres thickness by putting the “smarts” in the TV’s base or wall mount.

Sony had a similar technology display us another similar self-emitting material which it called Crystal LED.

As its name suggests a dual view TV allows two people to watch two different programs on one screen.

Dual view is accessible wearing glasses which single out the desired picture for each user and blocks out the other and vice versa.

LG will be releasing a dual view TV later in 2012 which can allow two viewers to share different views of the same source.

It will be mainly aimed at gamers who want to play against each other on the same game.

Rather than the traditional side by side split screen view, players on this type of screen will have an entire picture for themselves.

Samsung also had a prototype dual view OLED TV on its stand which also uses glasses – similar to 3D glasses to give each viewer their own source to view.

For example one person might be watching a Blu-ray movie while the other is watching TV.

Even though most people may not have heard of 4K, there’s a good chance they’ve already seen it.

4K is used by digital projectors in some cinemas delivering the resolution that’s four times that of full high definition.

Samsung and LG were again the two companies displaying 4K on their stands. The Samsung 4K television was 70-inches while LG had an 84-inch model on it stand which it called an Ultra Definition TV.

While there is no native 4K content available for these TVs yet there will be the ability to upscale full HD to 4K levels.

There is also an expectation the studios may start releasing the same 4K versions of their films released on disc within two years and creating an entirely new home video format that will exceed Blu-ray in terms of resolution.

Panasonic also showed off a 4K display but, strangely it was packed into a 20-inch screen instead of a massive television.

On the projector front, Sony was also offering a 4K home theatre projector was was priced at $US25000.

3D is still alive and well in TV land and the amount of content coming through us increasing.

Panasonic and NBC made a joint announcement at that the 2012 London Olympics would be broadcast in 3D.

Glasses are still required in most cases with LG sticking to its passive lightweight glasses it introduced in 2011.

Panasonic has also joined the 3D passive glasses movement with some of its lowend LCD TVs.

Over at Sony, on display was a 46-inch LED TV which required no glasses to view the 3D picture from any angle.

This Sony display was a 4K TV so eliminating the glasses must involve losing resolution – but with so much resolution to play with it still offered a high definition glassless 3D experience.

Samsung also introduced a range of gaming computer monitors which can be viewed in 3D without glasses.

* Stephen Fenech travelled to CES as a guest of Samsung