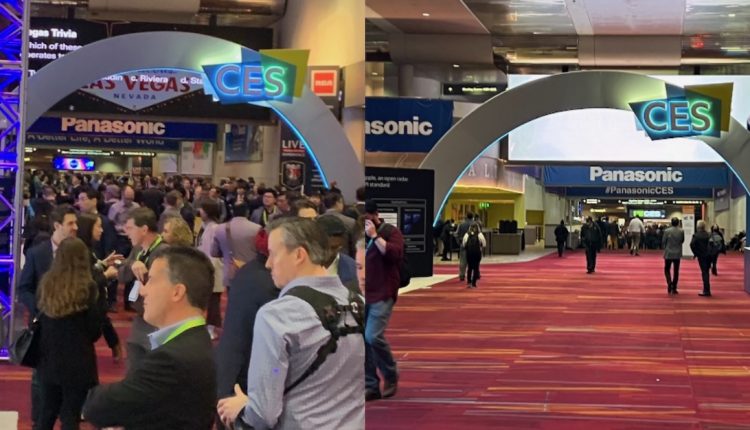 The 2022 Consumer Electronics Show kicked off in Las Vegas today but, with the world still in the grip of the COVID pandemic, the world’s biggest technology show was a lot different this year as it welcomed visitors from around the world.

We knew that this would be a much smaller event in terms of attendees and the number of exhibitors.

But, despite the smaller crowds and more empty space in exhibition halls, it still had the same buzz as previous years as we gathered to see for ourselves the latest tech from the world’s biggest brands.

We’ve been attending CES since 2005 and one thing each show had in common every year, apart from showcasing cutting edge technology, was huge crowds and packed exhibition halls.

Typically, Day One of CES is the busiest of the week and it’s not uncommon to be shoulder to shoulder with other attendees in the various booths that fill each of the halls.

This year, the show still went ahead despite some big-name companies pulling out at the last minute including Lenovo, Microsoft, Amazon, Google, Mercedes.

Members of the media, retailers, analysts and smaller exhibitors also decided to stay away this year as the Omicron COVID outbreak continued around the world.

But the Consumer Technology Association, the company responsible for staging CES every year, had some strict policies in place to keep attendees and exhibitors making the trip to Las Vegas safe. 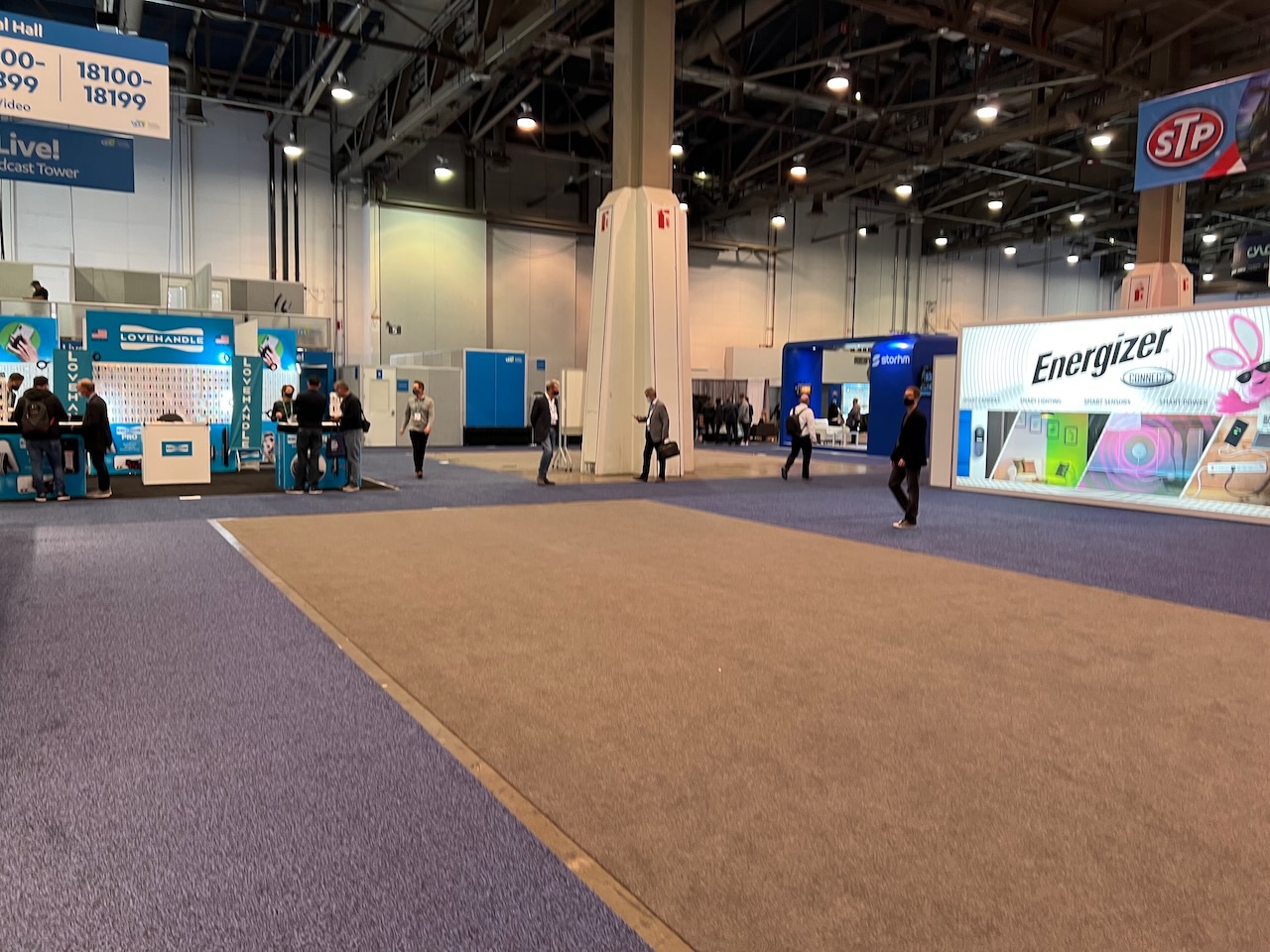 The Central Hall of the Las Vegas Convention Centre, where the major brands like Samsung, Sony, TCL, Panasonic and LG are located, had lots of empty space between booths.

Sony’s stand was mostly empty with exhibits on the edges of their space.

But it looked like it was business as usual with Samsung, Hisense and TCL.

Samsung once again had the largest booth at CES, but attendees had to check in and wait for an SMS before they could enter the stand.

But once inside there were also instructions to manage the flow of people inside. 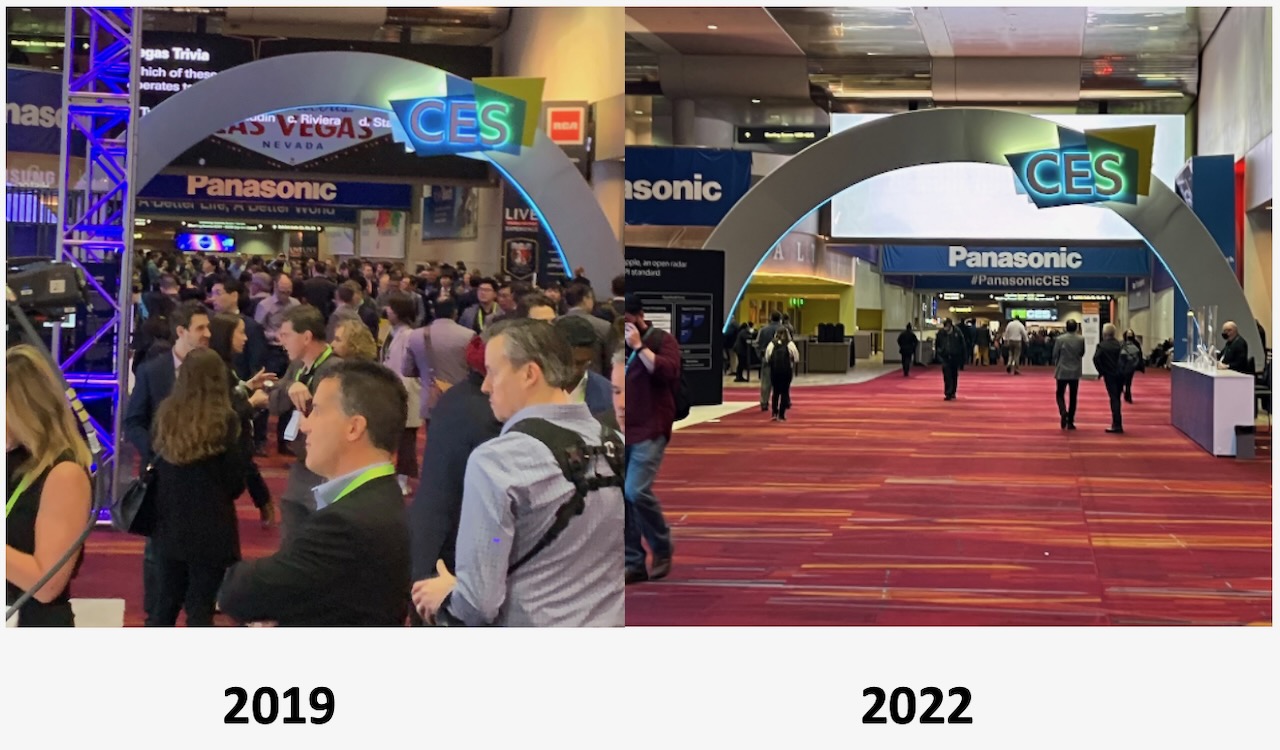 Some had direction arrows on the floor to ensure people were moving in the same direction rather than crossing paths and walking in opposite directions near other people.

LG still had a stand, but it was virtually bare and included signs with QR codes to link to product releases and past CES highlights.

This was a big shift from CES shows of the past when LG had a wall of OLED screens and standing room only inside the booth.

At one of the hall entrances was a box with coloured stickers which attendees could fixed to their badge.

These coloured stickers are meant to indicate to others how you would prefer to engage.

A green sticker means you’re OK with handshakes, a yellow sticker means it’s only elbows and fist bumps while the red sticker meant no touching at all but happy to wave hello. 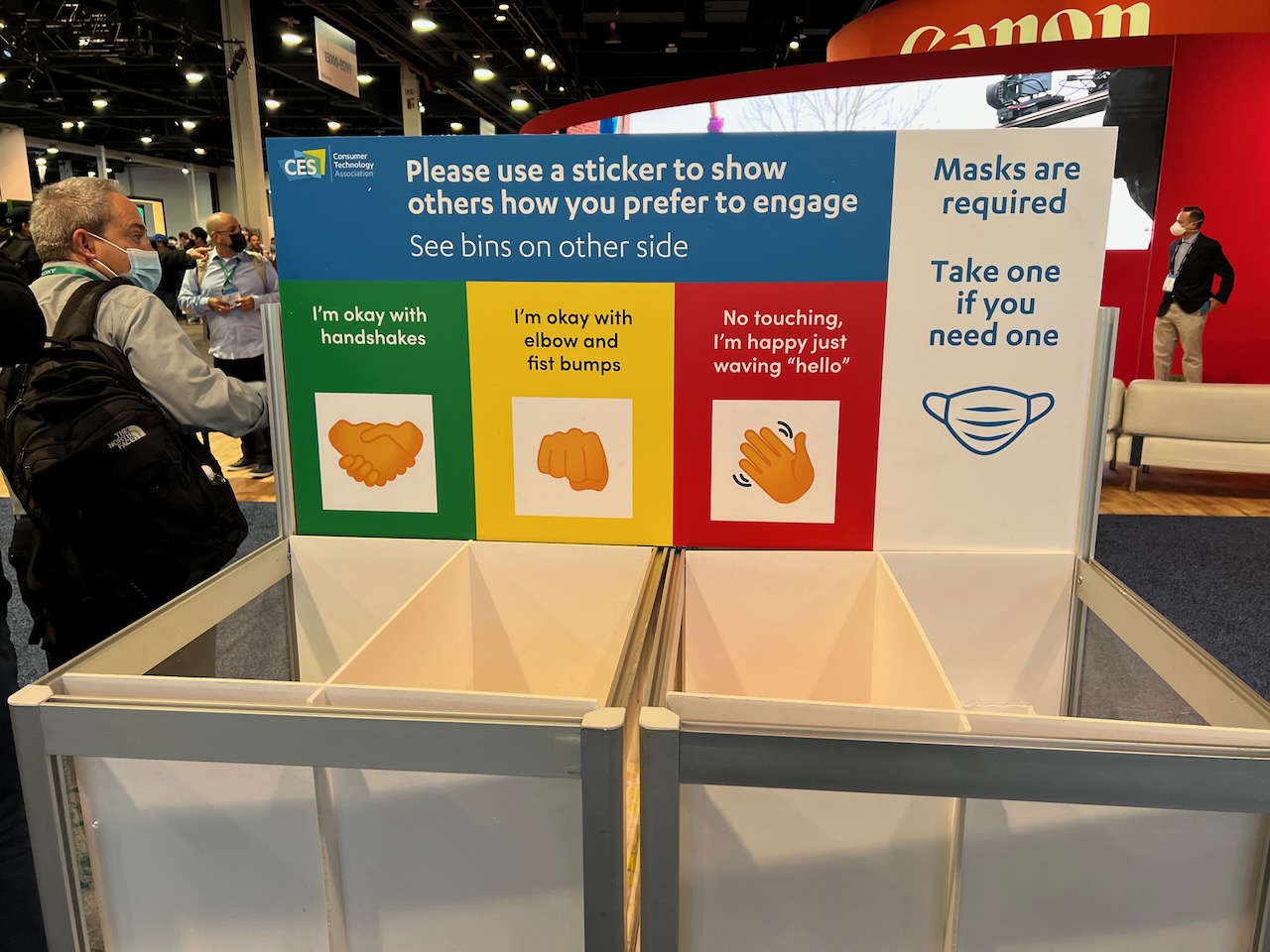 Face masks were required to be always worn indoors except when you were eating or drinking.

And the extra space within the halls made it really easy to social distance from others.

This year also saw a new hall added to the CES exhibition space – the gigantic West Hall which is now the largest hall at the Las Vegas Convention Centre.

Ironically, there is now more exhibition space than ever before for CES but the smallest number of attendees in a long time.

Inside the halls there was still a good number of people, but it was a lot easier to move around and get from booth to booth and move from hall to hall.

Normally it takes a while to move around because of the sheer number of people and the lack of open space.

There were still long lines to see exclusive demonstrations and popular products but nothing like we’ve seen in the past.

CES isn’t just a big event for media but for the industry and the Australian employees of the major tech companies who come to Las Vegas for the event stayed away to stay safe.

CES is also where retailers and vendors meet and make the deals for the stock you see in stores for the year.

Last year we had no choice but to interact virtually but, with most of the Australian retailers staying home those deals would also need to be made online rather than in-person.

Larger media companies also didn’t allow their journalists to attend because of the pandemic.

Usually, reporters from Australia’s TV networks are also here in person working on packages and news pieces and Tech Guide has often been called on while we’re here to provide the expert commentary.

At CES 2022, there is just a handful of Australian tech journalists – including Tech Guide.

We decided months ago that we would be making the trip to Las Vegas and that we’d be willing to follow all the necessary rules and protocols to get here.

This included being tested 24 hours before leaving for the US and having proof of vaccination.

Upon arrival in Las Vegas, we were asked to show our passports and vaccination certificates to collect the badges which would get us into the show.

We were also given for free a rapid testing kit which included two tests.

The CTA advised attendees to watch for symptoms and to test themselves before entering a CES venue.

It was very much an honour system because there was no requirement to prove we didn’t have COVID.

After seeing the greatly reduced CES in 2022, it begs the question: will we see ever the Consumer Electronics Show as big as it has been in the past.

It is still the biggest tech event of the year that brings the industry into one place.

Our prediction that CES 2023 will be back to normal with more people than ever before.