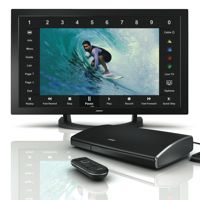 Bose VideoWave is a TV and surround system in one

Bose is a company renowned for producing high quality audio products but have entered an all-new sphere with the launch of the VideoWave.

The system, the result of more than 10 years of research, has a 46-inch full high definition LCD screen with a home theatre audio system built-in.

The VideoWave creates an impressive surround home theatre sound sound and music experience without any other speakers in sight.

According to Bose only a third of customers who buy a flatscreen high definition TV connect the panel to a home theatre system.

And one of the main reasons is that the thought of working out how to connect a system like that is quite intimidating.

Another off-putting by product of having several sources connected to a TV and a home theatre system is a coffee table full of remotes.

Included with the Bose VideoWave is a receiver which connects all of the sources to the display.

And they’re all controlled by the Bose click pad remote which replaces all of the other remotes in a single compact device.

One touch of the Bose remote’s click pad puts all of the current device’s controls up on the screen in a ring around the picture.

And by moving your finger around the click pad on the remote users can scroll to the desired controls without having to take their eyes off the VideoiWave’s screen.

So how does Bose create such a realistic surround sound effect with clarity and zero distortion?

It starts with a seven-element speaker array and advanced Bose signal processing which can aim output to make the user think sound is coming from various parts of the room.

VideoWave can even produce deep bass output without a separate subwoofer thanks to the Bose acoustic waveguide – a canal behind the screen which can push large volumes of air – and six woofers to deliver a satisfy sound well beyond the screen.

The demonstration at the launch at the Incontinental Hotel in Sydney was quite dramatic. When we entered the room we could see a TV mounted on the wall and what appeared to be five wall-mounted surround sound speakers and a subwoofer shrouded with a black cloth.

But in the middle of the demonstration of the audio capabilities of the VideoWave, the surround speakers all fell off the wall to the floor and the subwoofer revealed to be an empty wireframe.

It dramatically proved that everything we had heard came directly from the screen.

Now the WaveGuide is not going to compete for the title of thinnest TV on the market – it is six inches thick and weighs almost 48kg with a stand and 44kg without.

It can still be wall mounted despite the added bulk with the additional audio technology and innovation as well.

The Bose VideoWave can be positioned in any room and the built-in Bose AdaptIQ audio calibration technology can ensure the best possible sound for that space.

The VideoWave is priced at $7999 and while some people may baulk at the price it should be noted customers receive a full HD television, an integrated high quality surround sound and music system, a separate receiver and a remote to control everything.

One thing the VideoWave lacks is an internal digital TV tuner so it would need to be connected to a set top box to watch free to air TV.

But it can include other devices like Blu-ray Disc players, gaming consoles, PVRs, Apple TV, iPod and even computer as accessible sources.

The Bose VideoWave is available from June 1.