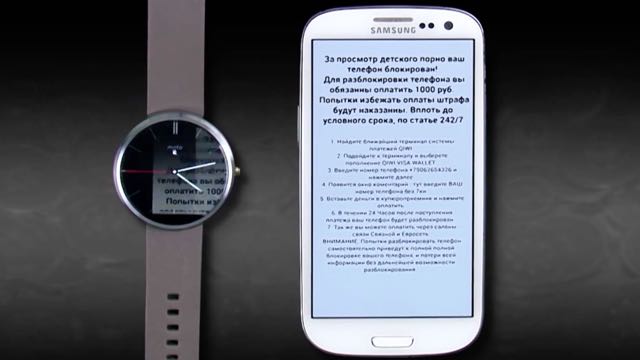 Ransomware – the threat that can lock your computer and its files until you pay the hacker to release them – looks set to spread to our smartwatches, according to security experts.

Cyber criminals are always on the lookout for new opportunities and, according to research from security company Symantec, the smartwatch could be the new frontier.

Other things that could be targeted are other wearable devices and the connected Internet of Things products that are used in a smart home.

The increased interest in smartwatches has captured the attention not only from customers but also from hackers.

There are now thousands of apps being developed from smartwatches.

The process of installing an Android Wear app creates a link between the smartwatch and the paired smartphone.

Ransomware threats already exist for Android devices so Symantec decided to test how an Android device might be affected by typical Android ransomware.

They used a Moto 360 smartwatch and an Android phone.

Once the .apk file was installed it infected the smartphone as expected.

And when it was paired to the smartwatch, the ransomware was also pushed across.

To remove the ransomware, the infected app has to be uninstalled from the smartphone that will then remove it from the smartwatch.

But there is also the potential the ransomware may not be removable unless both the smartphone and smartwatch were reset to factory settings.

* Check permissions when installing apps to make sure that they are appropriate for the type of app being installed. For example, does a game really need to be able to access your contacts list or send an SMS?

* Use a suitable security solution on your mobile device

* Keep your software up to date