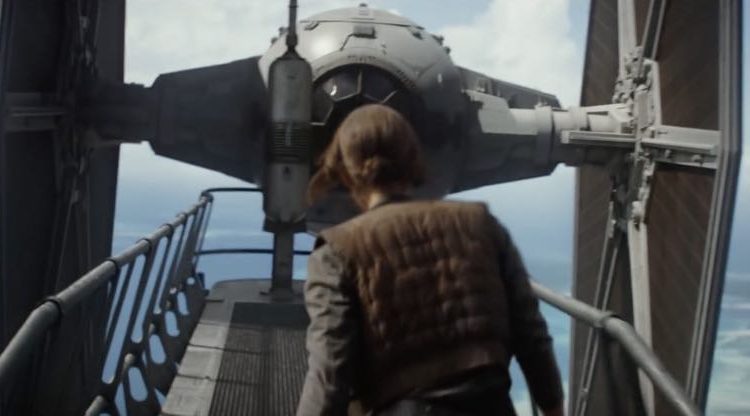 You’ve already watched Rogue One – maybe even more than once – and you might have noticed that many scenes from the trailers didn’t make it into the final cut of the movie.

With any movie we see, we usually tick off in our heads the scenes from the trailer we see in the film.

So you can imagine with Rogue One’s teasers and trailers we had a lot to look out for.

I’m a mega Star Wars fan and I watched the trailers and teasers many, many times and noticed plenty of shots and lines that didn’t make it into the release version of the film.

It isn’t uncommon for scenes from a trailer to not make the movie – we saw scenes from Episode VII The Force Awakens trailer that were left out of the final version.

But with Rogue One, there was an unusually large number of scenes, shots and lines that were left out for one reason or another.

We have our theories about these omissions especially after reports of massive re-shoots earlier this year.

Many interpreted this as the production being in crisis and Disney (now the owner of Lucasfilm) not being happy with what was already in the can.

We’ll leave up to you to decide if you’ve already watched it.

We thought the movie was excellent and said so in our review.

We’re hoping we get to see all of these deleted scenes when the movie comes on disc later this year.

But here are the shots, lines and scenes from the teaser and trailers that didn’t make it into the movie.

THIS IS A REBELLION ISN’T IT

This scene where Jyn first meets Mon Mothma after being broken out of an Imperial prison plays out completely differently in the movie.

“State your name for the record,” the commander asks Jyn Erso in the teaser but in the movie Jyn’s introduced with her criminal record and her pseudonym before they reveal they know she is Jyn Erso – daughter of Galen Erso.

In the teaser, Mon Mothma also says Jyn has been “on your own since you were 15” but in the movie Jyn tells them her backstory.

And this line from Jyn in the teaser “this is a rebellion isn’t it – I rebel” is nowhere to be seen in Rogue One.

Mon Mothma in this teaser scene also discusses the Empire’s super weapon and identifies it as the Death Star but in the movie Jyn reveals that information.

That looked like a major re-arrangement that could have been the result of editing or those re-shoots.

WHAT WILL YOU DO IF THEY CATCH YOU

These lines play over other scenes in the teaser and then he continues with: “If you continue to fight – what will you become?”

Those lines are not in the movie and when he says “what will you become?” that plays out over a shot of Jyn Erso being seen with lights coming on around her while she wears an Imperial uniform.

Gerrera says these when he is much younger – when he was bald – so it might be a flashback scene while he was Jyn’s guardian.

Or was there a plot line with Jyn Erso possibly switching sides to the Empire? Her father Galen Erso was part of the Empire’s team that created the Death Star after all.

KRENNIC WALKS THROUGH WATER IN HIS CAPE

A standout shot of the teaser was of Director Krennic walking through the shallow water on the tropical planet of Scarif with dead Stormtroopers floating in the water on either side of him.

In the movie Krennic doesn’t get out of the tower as he tries to prevent Jyn Erso from transmitting the Death Star plans to the rebels.

JYN AND CASSIAN BATTLE IT OUT ON THE BEACH

In the teaser and also on the Rogue One billboards – there are shots of Jyn and Cassian running along the beach on Scarif with the other rebels as they fight it out with the Stormtroopers.

And you can tell this scene was shot after Jyn retrieves the plans because you can clearly see them in her hand.

The trailer also has a split-second shot of Jyn, Cassian and K-2SO running along a platform inside – with the plans in Jyn’s hand.

In the movie, Jyn makes it to the dish at the top of the tower on Scarif to transmit the plans – she and Cassian don’t come down to the beach until the very end when the battle is over.

Maybe an earlier version script must have involved Jyn trying to get the plans physically off Scarif rather than just transmitting them.

In the first trailer there is a shot of Jyn and Cassian sitting in his fighter and agreeing on something because they both take turns saying “Good”.

Cassian also mentions that he has been “recruiting for the rebellion for a long time” but we don’t think that made it into the movie.

K-2SO has some of the best lines in the movie and one of them in the trailer ended up on the cutting room floor.

When K-2SO meets Jyn he says: “The captain says you are a friend – I will not kill you.”

To which Jyn replies: “Thanks!”

In a scene reminiscent of C-3PO in Empire Strikes Back, J-2SO announces the odds about what they’re about to attempt.

Most of these make it into the movie but one time when he says: “There is a 97.6 per chance of failure” and Cassian defends him by saying “he means well” is nowhere to be seen in the movie.

One of the coolest shots of the first trailer is when a TIE Fighter rises in front of Jyn while she’s moving along the gantry to flick the switch and align the dish to transmit the plans.

You don’t see that in the movie but she does get shot at by a TIE Striker and almost falls off the gantry.

Darth Vader is seen for the first time at the very end of the trailer as a final shot.

We see him from behind looking at some red shapes on a screen but that was cut from the final edit of the film.

The second trailer dazzled us with incredible shots of these new worlds.

One of these included a shot of Cassian’s fighter flying over the collapsed gigantic Jedi statue on Jedha from above but in the movie we do see the statue from other angles.

Jedha is rich in kyber crystals – which are used by Jedis to power their lightsabers – and had one of the first Jedi temples.

In the second trailer, we discover where Rogue One comes from – it’s the call sign the Rebels came up with for the stolen Imperial shuttle they hijacked to get them to Scarif.

In the trailer Bodhi Rook, the defecting Imperial pilot, says “Rogue, Rogue One” after being asked by K-2SO in the presence of Cassian but in the movie he comes up with Rogue One while he is with Jyn in the cockpit.

One of the sub plots of Rogue One is the internal power struggle among the Imperial officers and who gets to control the Death Star.

In one scene of the trailer Director Krennic is talking to Darth Vader and saying “the power we are dealing with is immeasurable.”

This is an obvious reference to the Death Star itself to which we hoped he quipped “the power to destroy a planet is insignificant next to the power of the Force” – but we have to wait for Star Wars (Episode IV) to hear that.