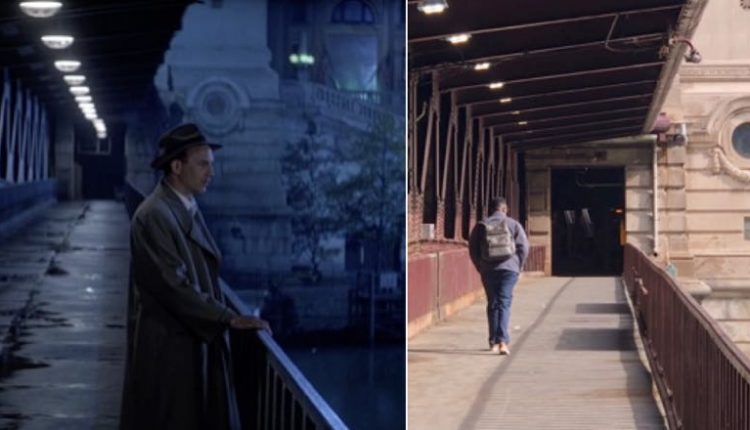 We were in Chicago recently for the Apple education event, it’s a city that has been the location for numerous movies including one of our favourites – The Untouchables.

We tracked down the actual locations of some of key scenes of the movie set in the Prohibition Era of the early 1930s.

The film, directed by Brian De Palma, tells the story Eliot Ness (Kevin Costner) and his band of Untouchables (including Sean Connery in his Academy Award-winning role as Malone) in their pursuit of gangster Al Capone (Robert De Niro).

Chicago has been the backdrop for other memorable films including Ferris Beuller’s Day Off, Transformers: Dark of the Moon, High Fidelity and The Dark Knight.

But in our trek around Chicago we found and matched numerous scenes and shots from the film with our own pictures.

This is the setting for a scene early in the movie where Ness (Costner) meets officer Malone (Connery) for the first time.

It was filmed on the Michigan Avenue Bridge underpass – not far the site of the new Apple Store. 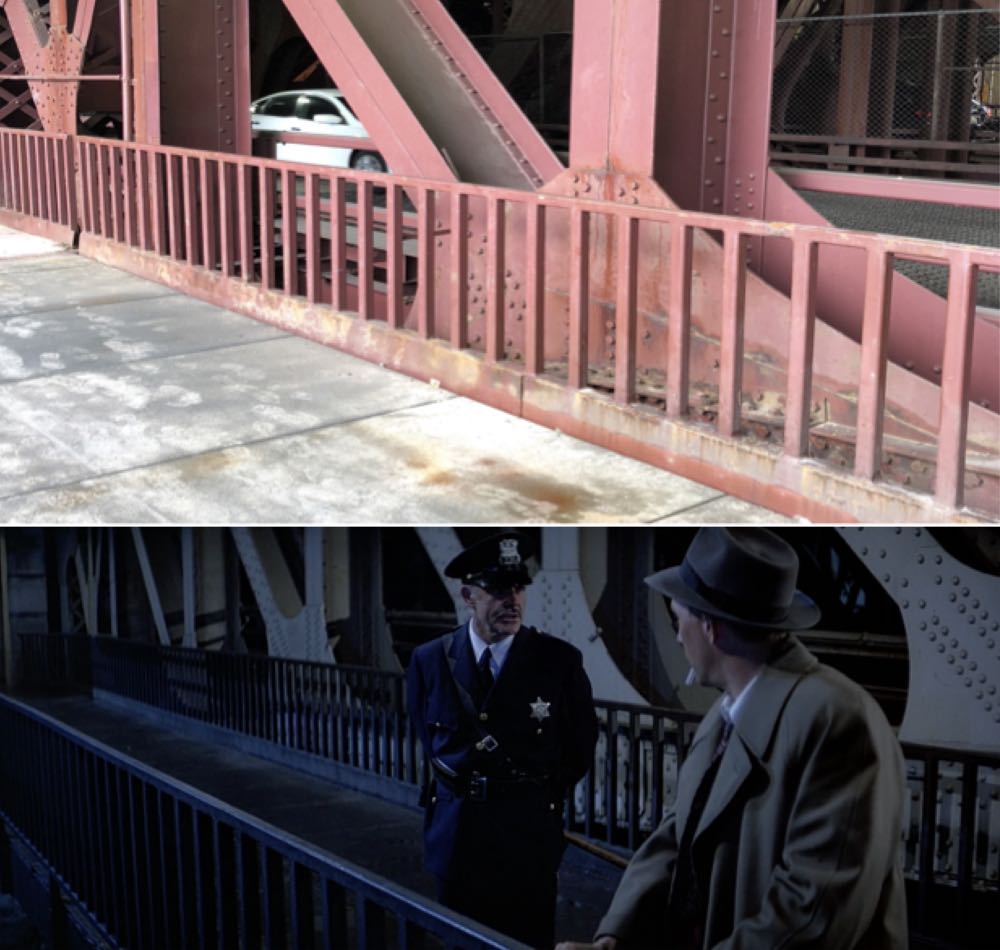 In the film, Ness is despondent after busting out on a raid that didn’t result in a seizure of illegal alcohol. 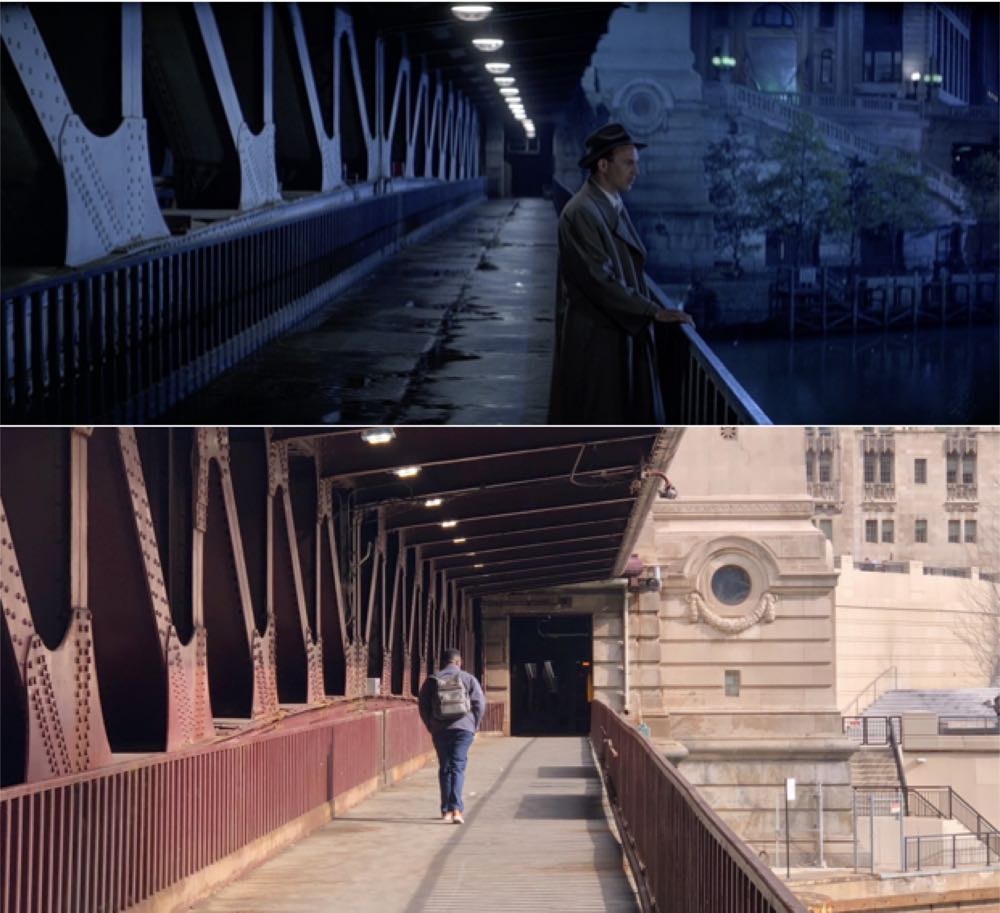 He tosses a piece of paper off the bridge and Malone has words with him  before asking him why he (Ness) is a carrying a gun.

This cul-de-sac with buildings on all sides was an ideal filming location. 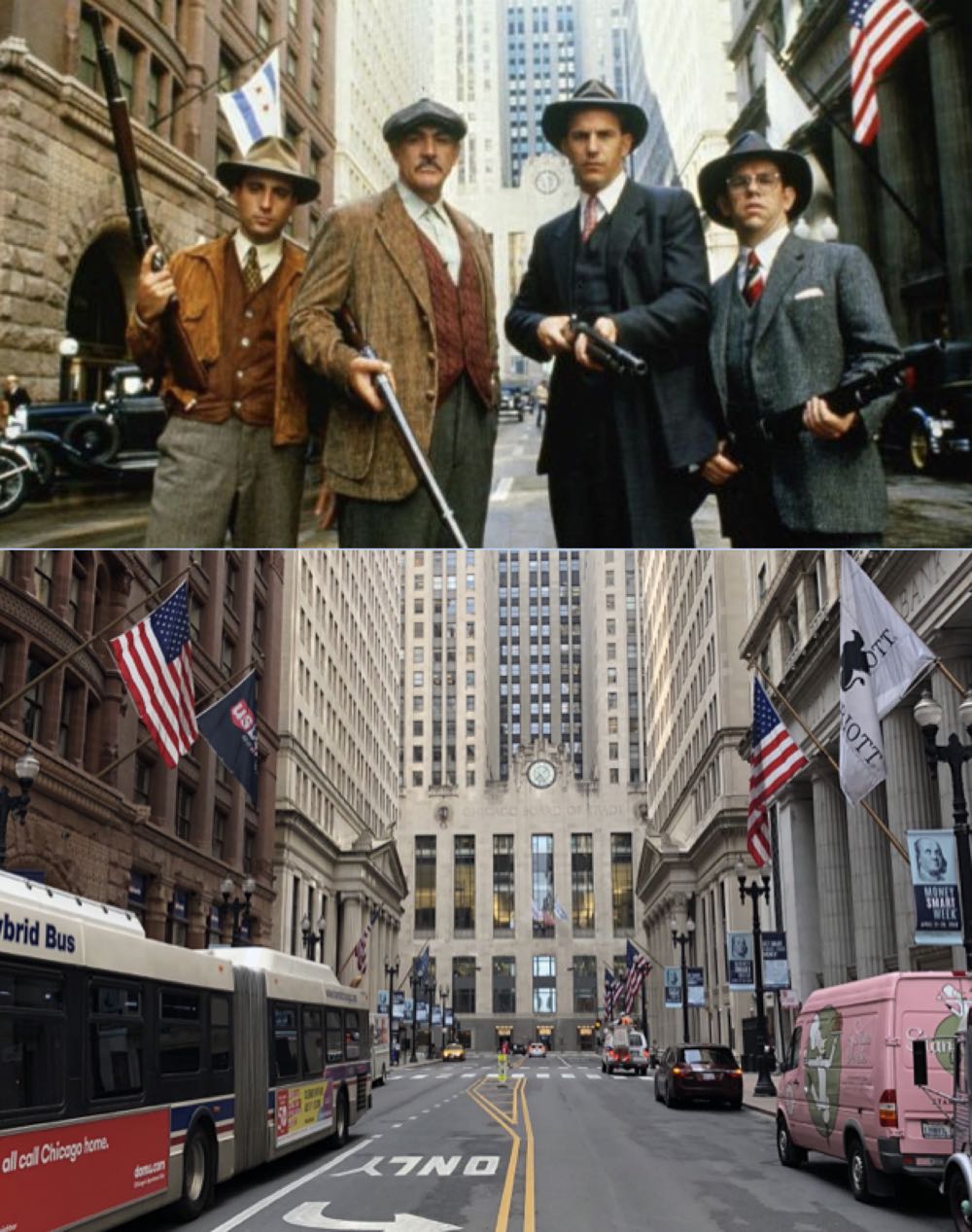 It served as headquarters for the Untouchables (actually the Rookery Building) and the backdrop the film’s publicity shots with all four of the men and their firearms. 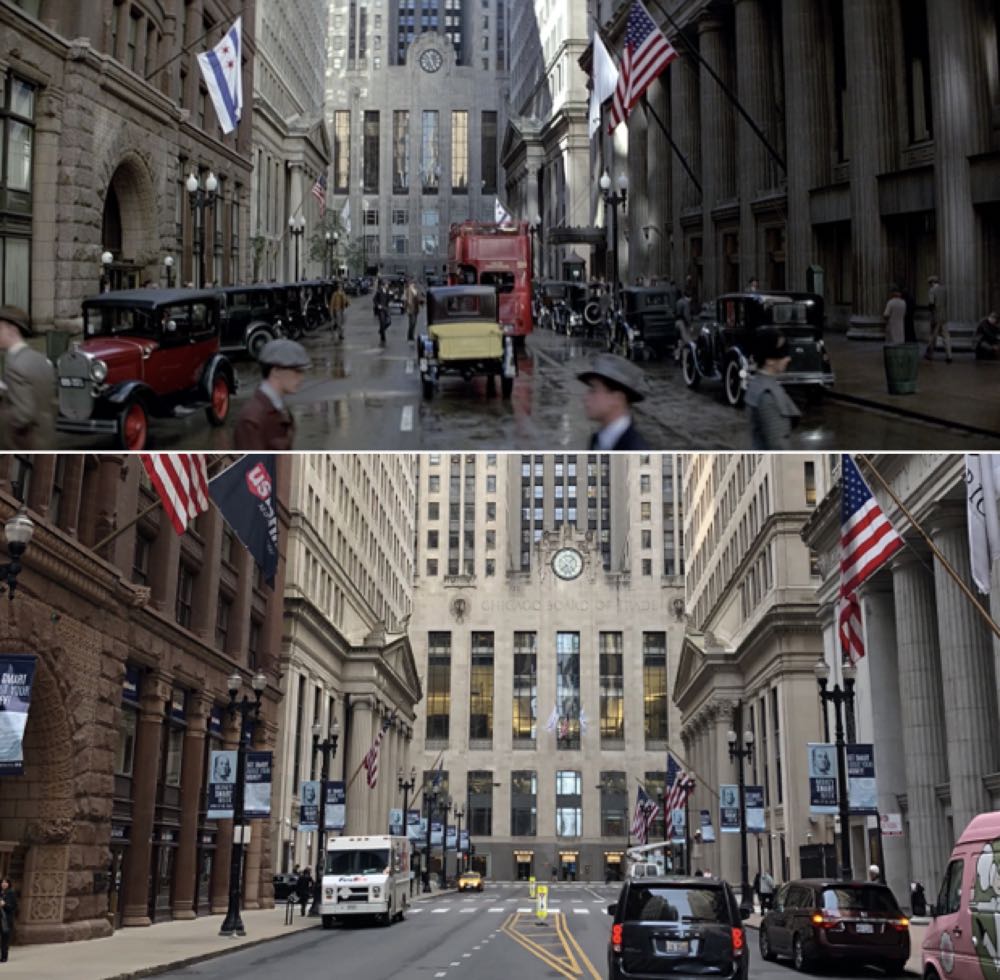 In one scene from the movie they cross the street for a raid at the Post Office across the road. 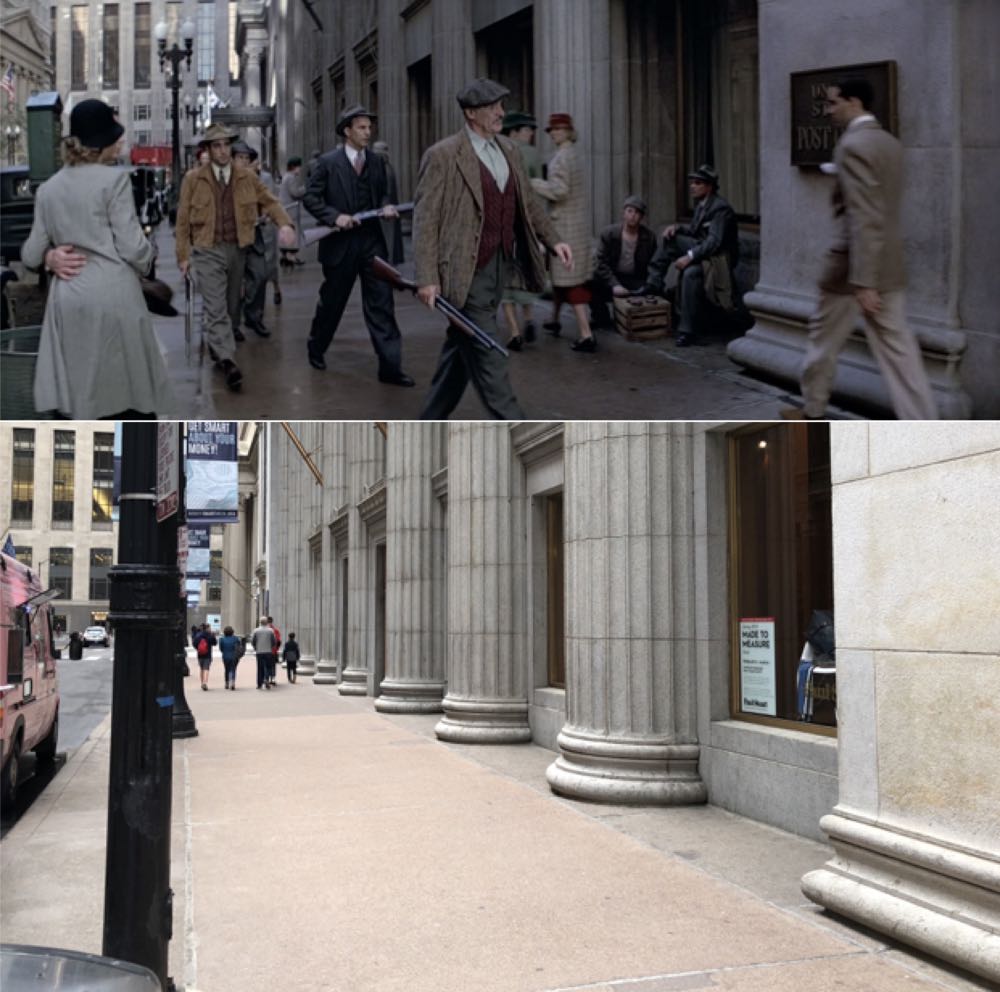 The Post Office is actually the City National Bank and Trust Company Building. 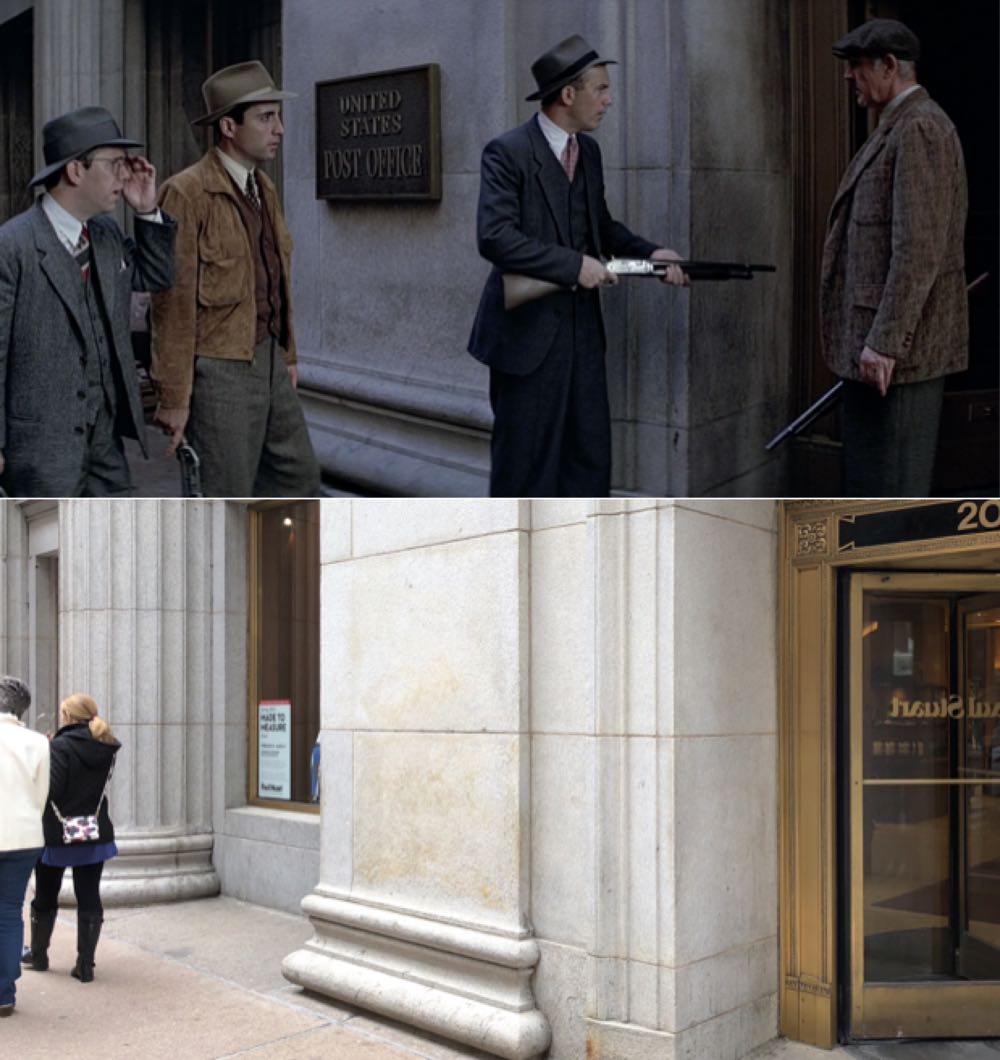 This same location was used for some key scenes in The Dark Knight.

This is the setting for perhaps the most iconic scene in the film on the Union Station main staircase. 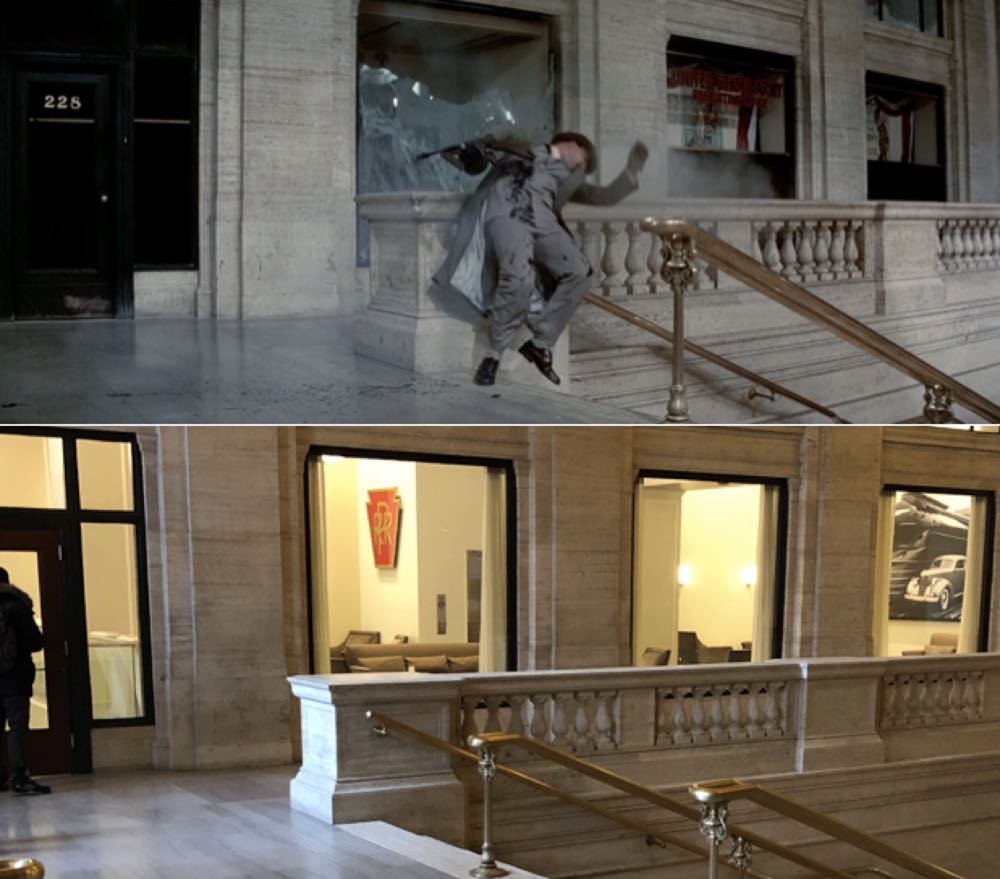 Here we see a deadly shootout to prevent Capone’s bookkeeper being hustled out of town.

The tension of the scene is increased with the addition of a number of innocent bystanders including some navy officers and a mother trying to get her child up the stairs in his pram. 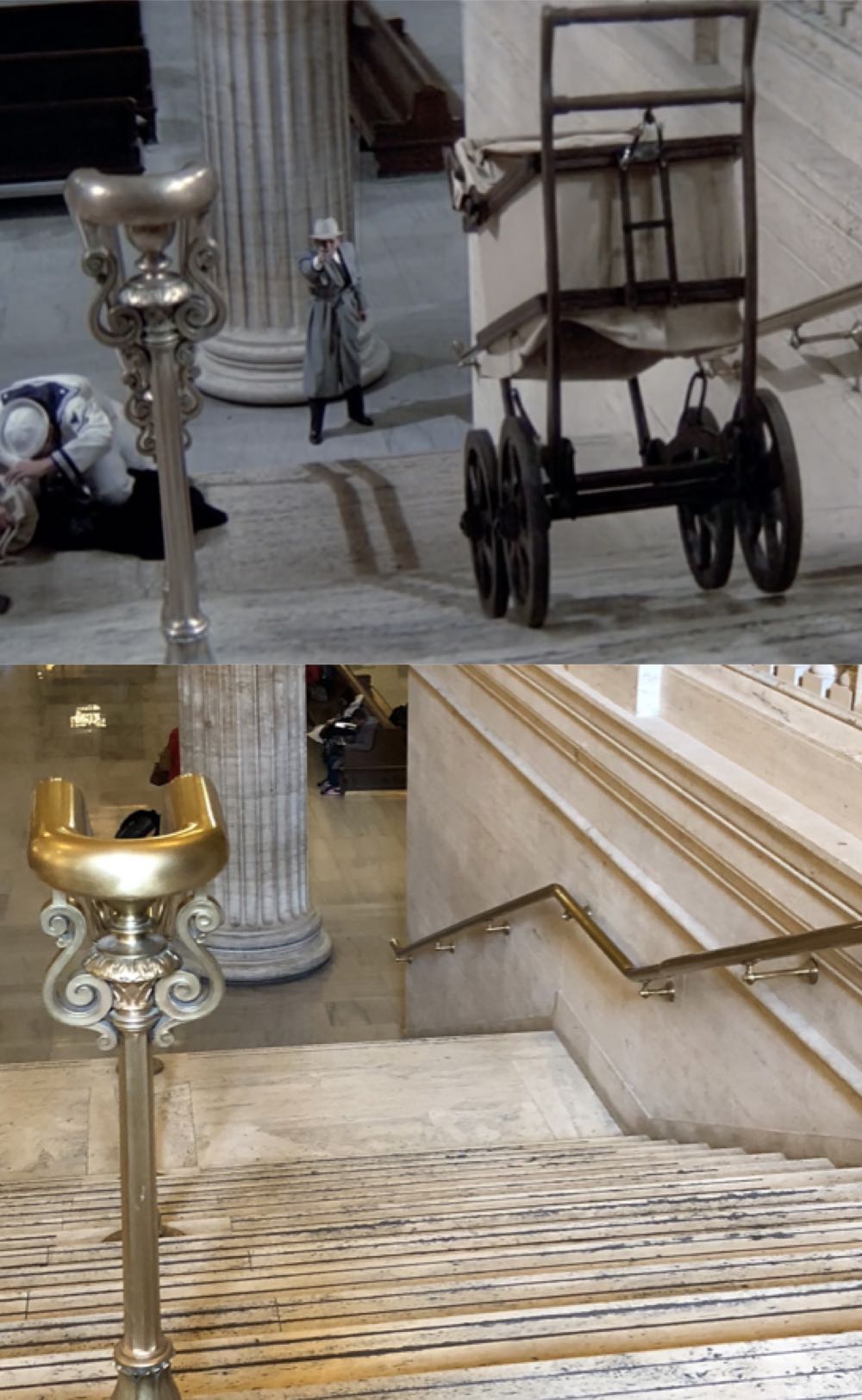 As Ness helps the woman up the stairs with the pram, Capone’s men usher the bookkeeper in from the top of the stairs before the gunfight begins. 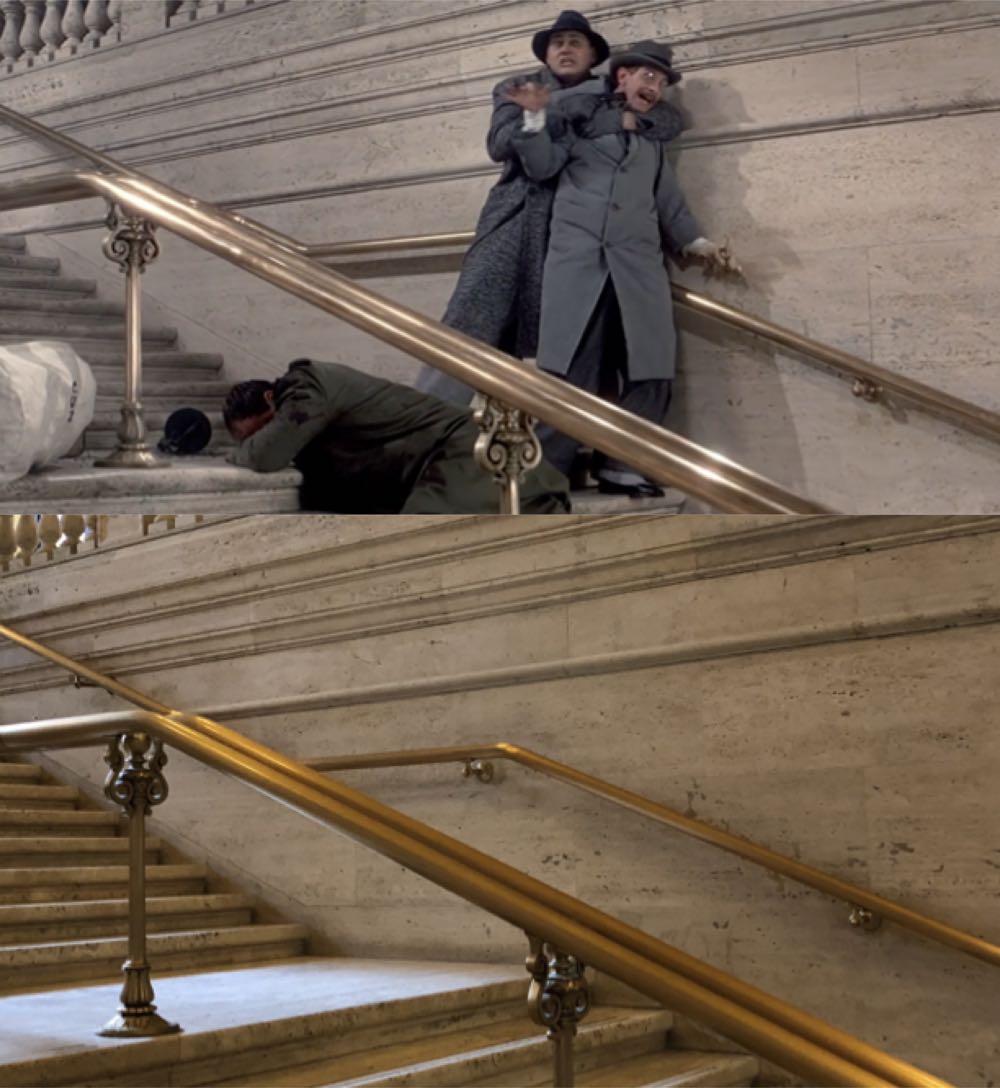 Ness, loses control of the pram before dispatching two of Capone’s men with a shotgun and switching to his pistol. 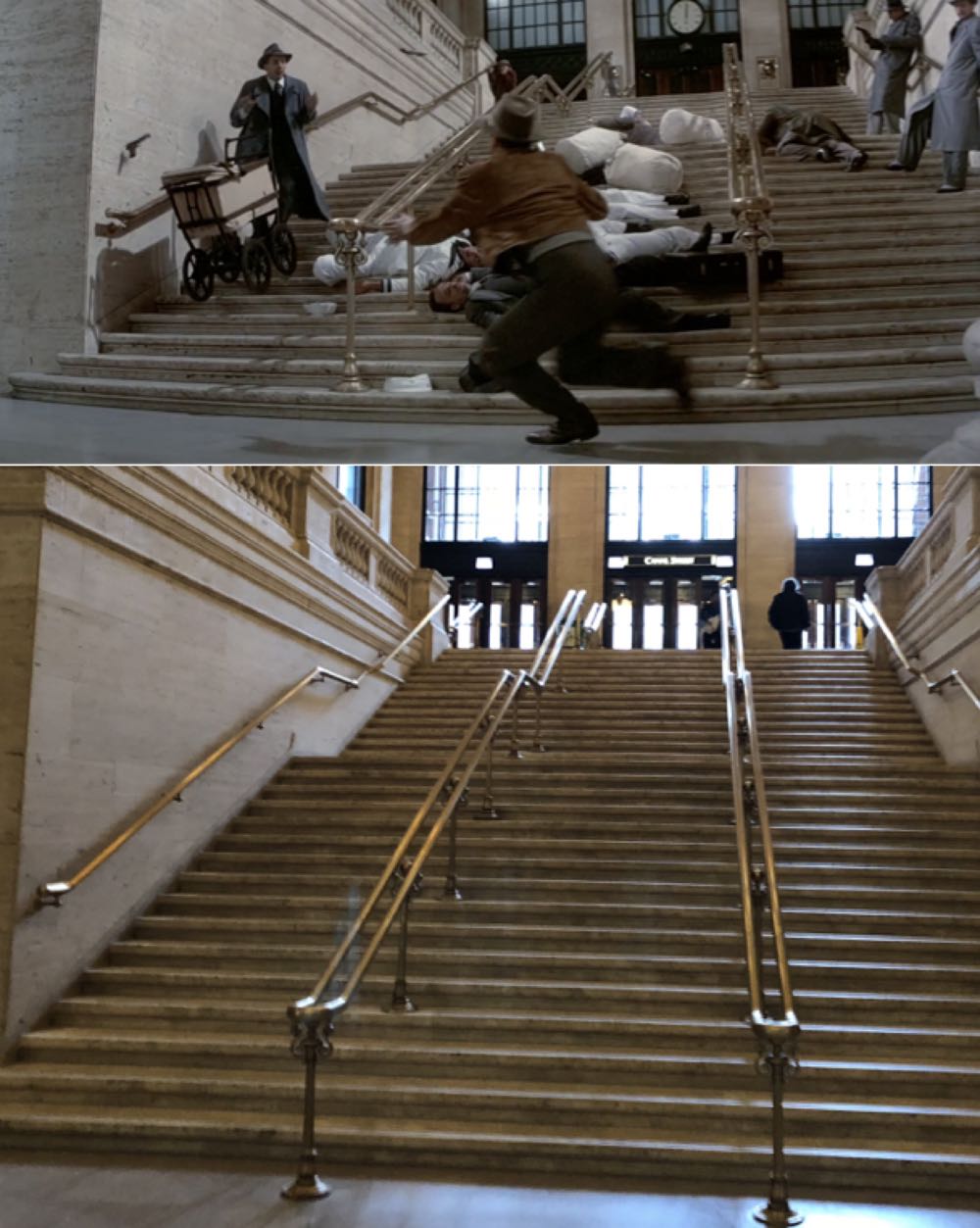 Sharpshooter Stone (one of the surviving members of the Untouchables) hears the commotion and races to the scene, throws Ness a spare gun and stops the out of control pram at the bottom of the stairs. 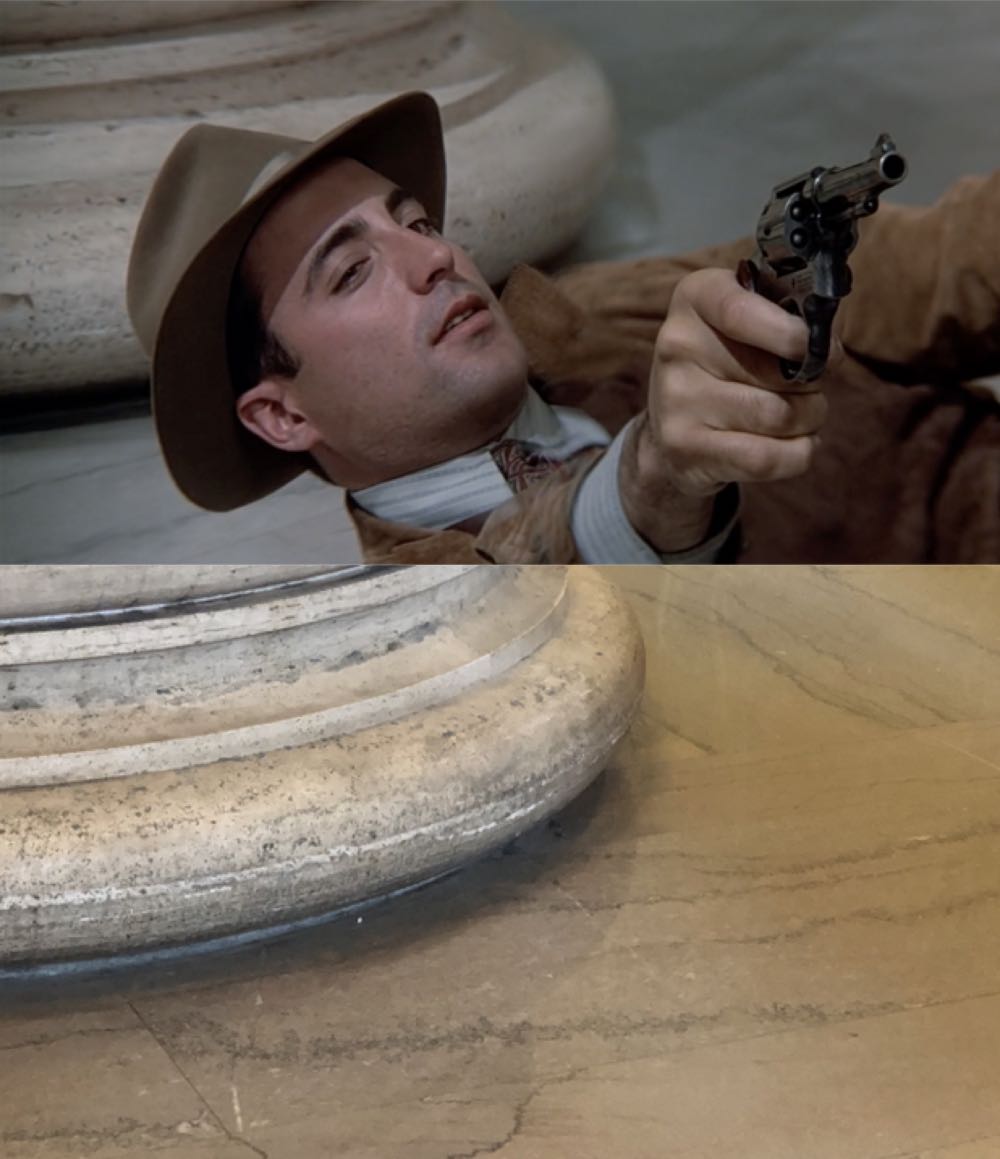 He takes aim at the Capone hood threatening to kill the bookkeeper if he isn’t allowed to escape.