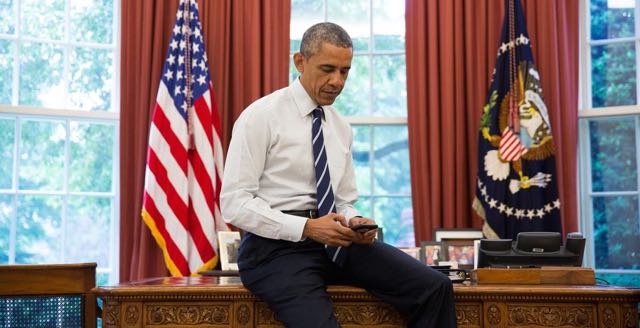 After more than six years in the White House, President Barack Obama has finally been able to create his very own Twitter account with the handle @POTUS.

Obama sent his first tweet using a White House iPhone from the Oval Office instead of his personal highly secure BlackBerry device.

His description on Twitter was: Dad, husband, and 44th President of the United States

And he gained more than 1.3 million followers in less than a day.

Before now, President Obama used the @WhiteHouse Twitter account or the @BarackObama handle, which was used mainly for campaigning.

Former president Bill Clinton tweeted Obama a message welcoming him to Twitter and asked him if the @POTUS username would remain with the office.

Welcome to @Twitter, @POTUS! One question: Does that username stay with the office? #askingforafriend

The message ended with the hashtag #AskingForAFriend – a reference to his wife Hillary Clinton who is the frontrunner to be the Democratic nominee for the presidential election in 2016.