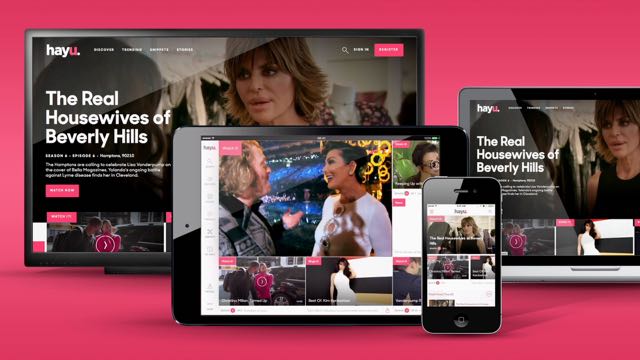 New streaming service Hayu is all reality shows, all the time

It’s already a crowded subscription video on demand (SVOD) market in Australia with Netflix, Presto and Stan but they will be joined by a new service specialising in reality shows called Hayu.

Hayu, part of the NBCUniversal company, will kick off in Australia in March and is all reality, all the time.

It will be priced at $5.99 a month with no lock-in contracts.

Entire series of popular reality programs like Keeping Up With The Kardashians, Made in Chelsea, The Real Housewives and Top Chef will be streamed on Hayu.

But even the latest episodes of US shows will also be available on the same day here in Australia as they are in the US.

There will be more than 3000 episodes available to stream at launch with more than 500 added each year.

The Box Sets feature also makes it possible to binge an entire series.

And Hayu has been made with social media in mind with short snippets selected from original episodes able to be shared.

Viewers can also access social media feeds from multiple sources about your favourite shows and the people in them.

Hayu will be accessible from multiple devices including smartphones, tablets, laptops and connected TVs.

When the service launches in March, viewers can sign up for a free 30-day trial.

Here are some of the shows you’ll be able to see on Hayu:

It takes a special kind of personality to handle flipping multimillion-dollar houses and maintain a thriving interior design business all at one time, but Jeff Lewis, an obsessive-compulsive successful businessman, pulls it off.

ground-breaking documentary series that gives an exclusive look at the life of Caitlyn Jenner, formerly Bruce Jenner, as she begins her new journey as a transgender woman.

Keeping Up With The Kardashians (Seasons 1-12)

A trend-setting reality series phenomenon, Keeping Up with the Kardashians profiles one of Hollywood’s most high profile families as its members seek fame, fortune and domestic bliss.

Shot in a constructed, glossy documentary style that is more soap than reality, this BAFTA-winning, flashy series follows the lives, loves and careers of a young, socially elite, group of friends from London’s most exclusive neighbourhoods.

Follows the lives of Los Angeles’s hottest, youngest, and most aggressive real estate magnates in the making as they net a fortune selling multi-million dollar properties in the most exclusive neighbourhoods – Hollywood, Malibu and Beverly Hills.

This docu-series follows a group of Persian-American friends living in Los Angeles who are trying to juggle their active social lives and up-and-coming careers while balancing the demands of their families and traditions.

The series follows some of the most affluent women in the country as they enjoy the lavish lifestyle that only Beverly Hills can offer – it’s all about big houses, big diamonds and big drama to match.

Follows an elite and powerful set of New York socialites as they balance motherhood, demanding careers and fast-paced social calendars packed with charity fund-raising galas, the social whirl of The Hamptons and interviews for elite private schools.

Emmy and James Beard Award-winning hit reality competition series that celebrates the culinary arts with a fascinating window into the competitive, pressurized environment of world-class cookery and the restaurant business at the highest level.