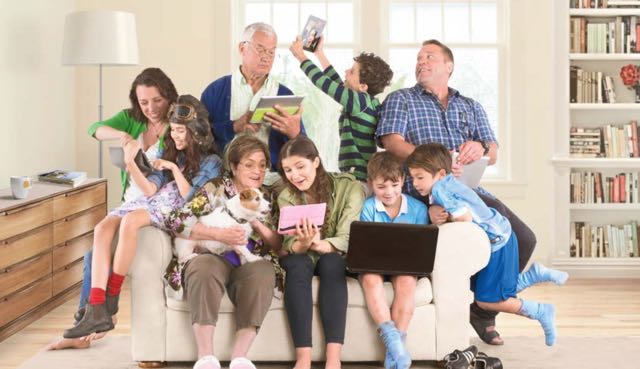 Australians love being online. A lot. That’s what one of the most extensive new studies has uncovered and you’ll be surprised how much we like being connected at work, at home, in bed, in the kitchen, in the bathroom, in the garage, in the backyard and in front of the TV.

The Broadband Index commissioned by NBN show we’re spending more time online than ever before.

The study surveyed 10,348 Australians across metropolitan, regional and remote areas and included NBN and non-NBN customers.

Households connected to the NBN are online for an additional 1.7 hours every day with the biggest increases coming from people in regional areas.

Overall, this year Australians will spend an additional 22 more days on the internet than we did as recently as two years ago.

“Using the internet has become part of our everyday lives and online multi-tasking is the new norm,” says NBN spokesperson Kelly Stevens.

“Most of us are getting online when we open our eyes in the morning and before we go to sleep, while a quarter of us (28%) hit the internet when we wake in the night.

“It’s unsurprising that those aged between 18-24 are online most throughout the day, followed by the millennials, then 35-54 year olds, with the Baby Boomers bringing up the rear.

“Families with children are the biggest users of the internet overall.”

The internet has also become the default communication tool but the method varies depending on when you were born.

For Gen X and baby boomers, email is the most popular but for 18 to 34 years-olds – social media is the preferred way to stay in touch.

Gen Z mainly use instant messaging platforms like FaceTime, Snapchat and WhatsApp to communicate while around 50 per cent of users are using services like Skype and FaceTime to stay in touch.

“There’s no doubt that the NBN is truly bridging the digital divide between metro areas and those outside,” NBN’s Kelly Stevens said.

“In addition to the internet being crucial for work related functions, people in regional areas also use it far more to connect with their community and to shop.

“As we move further into the digital age, fast and reliable broadband will be vital in areas such as business, health, education, entertainment and leisure.

“Currently more than three million homes and businesses can connect to the network across Australia, but as that number grows and we head towards our goal of eight million connections by 2020, the positive impact of the NBN network will become more evident.”