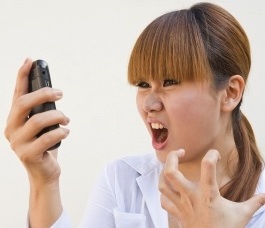 Are we paying for too many inclusions on our mobile caps which we’re not even using? The answer is a resounding “yes” according to new research by Macquarie University.

The State of the Mobile Nation Report, commissioned by low-cost mobile service provider Amaysim, shows 68 per cent of users don’t utilise all of the included value of their plans.

And 45 per cent of respondents have also reported they’ve experienced bill shock.

Australian users exceed their plans by an average of $80 per year.

The combined total of this overspending cost Australians more than $557 million in 2011.

“A third of Aussie mobile phone users are being hammered on two fronts.

“Firstly they are being slapped by bill shock. Secondly, this slap comes despite many of the same customers failing to use all of the included features of their plan.”

The study showed 24 month contracts were the worst offenders when it came to under-utilisation with only a quarter of customers using all of the included value.

Alternatively those on sim-only plans reported the lowest incidence of bill shock.

Surprisingly only a third of customers bothered to query these unexpected high mobile cap bills.

“Consumers need to be more assertive about their bills. It would seem that people have resigned themselves to not having billing hassles solved. My advice is to speak up – eventually you’ll be heard,” Amaysim’s Hansen said.

Amaysim’s all-in-one sim-only plan runs on the Optus network and costs $39.90 and includes unlimited calls, unlimited texts and 4GB of data with no lock in contracts.